Who will be the Phillies' DH this year? Everyone, and no one, says Klentak

According to the general manager, the team will likely go with a DH-by-committee 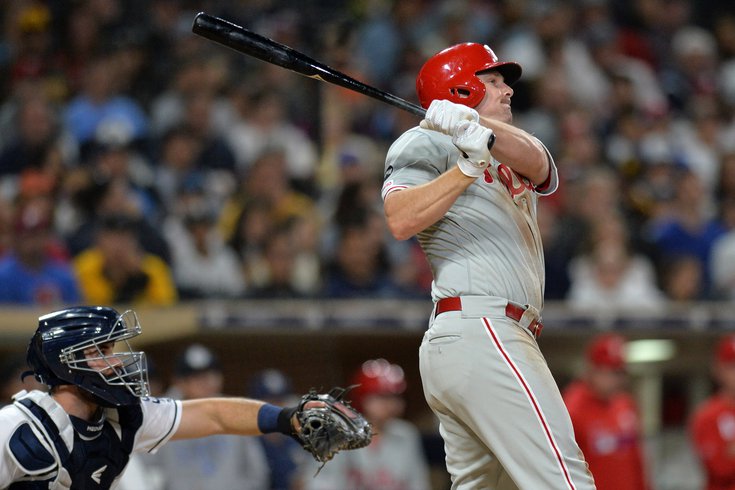 Philadelphia Phillies outfielder Jay Bruce will definitely get some at-bats as the Phillies DH. But he'll hardly be the only one.

The timing, the schedule, the expanded rosters, the lack of fans, the constant health screenings — there's obviously going to be a lot of things different about this baseball season. And for National League teams, there's also going to be another big difference once they take the field for games next month: the designated hitter.

As part of the agreement to bring baseball back in the face of an ongoing pandemic, MLB and the players' union have added the designated hitter to the NL for this 60-game sprint to crown a World Series champion — and there's a good chance it will be sticking around beyond this season.

If that's the case, the Phillies will have all of next season to look for a full-time DH to plug into their daily lineup. But this change, one that's honestly been a long time coming, wasn't thrust upon NL teams until well after the offseason concluded, leaving many teams like the Phils, scrambling to identify their guy to put in that spot this season.

On a Zoom call with the local media on Monday, Phillies GM Matt Klentak was asked about the possibility of the team using outfielder Andrew McCutchen, who tore his ACL last season, as the team's DH — at least in the early portion of the season as the rest of the roster shakes out — in order to give him some rest while still keeping his potent bat in the lineup.

Klentak's answer provided some confidence on the status of their left fielder and last year's leadoff man before the injury, as he said McCutchen left the team's Clearwater facility several weeks ago after completing his rehab and that as far as he knows, the 33-year-old former MVP is "100 percent" and ready to go.

That doesn't mean that the team won't still use Cutch — or Bryce Harper, or Rhys Hoskins, or J.T. Realmuto — in the DH spot from time to time. In fact, without a real prototypical designated hitter on the roster, with the possible exception of Jay Bruce, Klentak sees the Phillies as using that extra spot in their lineup as a way to not only help his starters get some rest without taking their bats out of the lineup, but to also see what the team has in some of their other, younger players.

"[The DH] is going to have an interesting effect on all National League teams, but us too, just because last offseason no team was preparing to have the DH," Klentak said. "And I know a few of you have written or speculated on this, but my guess is we will not name a full-time DH, a starting DH the way some American League teams do. I think, more likely, we'll use that as an opportunity to spread out at-bats to guys that deserve them that may not have a place to play in the field.

"We'll also use that as a way to get some of our regulars some days off their feet and still keep their bats in the lineup. Whether that's Harper, Realmuto, Hoskins — I think Jay Bruce is an excellent candidate for that spot — so we're probably going to rotate guys in and out and use that as a way to give our guys some rest.

"We've got 60 games and, I believe, only six off days. And obviously, it's a short three-week spring training, so I think the rest period will be helpful — and probably welcome — for a lot of these guys."

While it will serve as great way to help keep some of the regular starters fresh for new manager Joe Girardi, it will also allow for extra at-bats for some players who the team would like to see face MLB pitching, like former first-round pick and top prospect Alec Bohm. The 23-year-old third baseman had an outside shot at making the Opening Day roster before the COVID-19 outbreak, but was more likely to be a mid-season call-up. Now, with rosters expanded to 30 and a DH spot that could help him get some of those valuable plate appearances — not to mention no minor league season — it seems increasingly likely that Bohm will be with the big club when they take the field for their first game of the season.

Bohm was included in the Phillies 53-man pool of players who they'll take into spring training summer camp in South Philly, and our Evan Macy listed him among the players making the initial 30-man roster, which will be cut to 28 and eventually 26 players as the season progresses. And Klentak says he's among those 53 players for a reason.

"With Bohm, I don't think we were looking to limit his workload to the same extent [as top pitching prospect Spencer Howard]," Klentak said. "But I think the fact that Bohm is on this roster is also reflective of the fact that we are hopeful that he'll be able to contribute for us this year."

With the infield pretty much locked down, it would make sense that Bohm would see spot starts in the field to help spell Jean Segura (or Didi Gregorius or Scott Kingery for that matter, with the way Segura and Kingery can move around the infield). But it would make even more sense that, with some success at the plate, Bohm could earn more at-bats in the DH spot against left-handed pitching, with Jay Bruce serving as the main guy against righties.

There's something to be said for having some consistency at the DH spot in your lineup, but without the right guy on their roster to take over that role, it appears Klentak and the Phillies are prepared to do the next best thing: maximize the at-bats for the players who deserve it the most, while balancing that with the best matchups against the opposing pitcher.

After all, it's going to be a strange season either way. And with things seeming changing with each passing day, there's still a lot up in the air.

"In this unique 60 game season there may be some opportunities to allow some players to get their feet wet," Klentak added, "particularly in the early going when the rosters are at 30. ... I don't really know exactly how it's going to play out but we are definitely considering all variables and trying to piece them together in the best way possible."