How much would it cost to keep Aaron Nola in Philadelphia long-term? 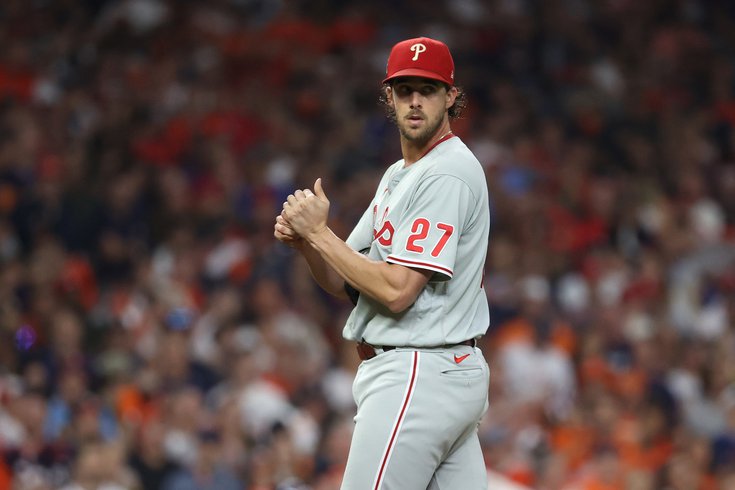 Will Aaron Nola remain a Phillie after 2023?

Now that the Phillies have played (and won) the free agency game, it may be time for them to focus on the players they currently have — and keeping them around to hold their window of contention open.

This mostly refers to Aaron Nola, one of three current Phils who'll become a free agent after the 2023 season (the others are José Alvarado and Rhys Hoskins).

The Phillies spent $72 million to add Taijuan Walker to a pitching rotation that has Zack Wheeler (through 2024) and Ranger Suárez (through 2025) locked down for years to come. This is in addition to young pitching prospects that everyone is very high on in Andrew Painter, Mick Abel and Griff McGarry. The future looks extremely bright for the Phillies' starting five — but will that future include Nola?

Nola was a first-round pick in 2014, one of the few from that era that has worked out for the team. He placed third in NL Cy Young voting in 2018, seventh in 2020 and fourth last year, as he anchored a rotation that advanced all the way to the World Series.

He overcame a reputation this past summer that he was, well, terrible late in the season (the Phillies collapsed more than a few times during his tenure with the team) and before the entire team eventually fell apart — due perhaps to exhaustion — in November to the Astros, he proved he had a big-time arm.

That arm could get him paid handsomely. And the Phillies should be doing whatever they can to get any kind of discount — something they could achieve by keeping the right-hander from reaching the free-agent market altogether.

Here are some stats from 2022 his agent will no doubt be advertising as they look to get their client to maximize his value:

Nola has emerged as a strikeout king, finishing in the top 10 in Ks in four of the last five seasons. He's also been the picture of good health — he has not missed a start since 2017. He has a 29.9 pitching WAR over his career, impressively 17th best of all active hurlers. His career 10.1 strikeouts per nine ranks 8th among all active players (his K/BB rate is 9th).

Nola had a no-brainer team option exercised this offseason, and he'll earn $16 million in 2023. According to spotrac.com, his actual value on the open market is just over $26 million per season. In fact, they project he'll net a contract in free agency worth five years and $132 million.

For some context, Bryce Harper and Trea Turner already make over $27 million per season on the Phillies' roster. A $26 million AAV would place Nola eighth among active pitchers in the majors right now. But based on recent signings, the Phillies should do everything they can to offer Nola that much.

Here's a look at the top-paid pitchers right now:

There is a real argument to be made that Nola could be one of the most sought-after free-agent pitchers in recent memory if he does indeed slip away from the Phillies at age 30. The only starter on the list above under the age of 30 is Ohtani, a unicorn player who is also a slugging outfielder.

Nola — with another season of solid work under his belt — will be lacking the award hardware Scherzer and Verlander boast, but he'll be in his prime and healthy.

The Phillies should be eager to add Nola to the top-paid pitchers list and if they can avoid a bidding war they'd be quite smart.

"I kept telling people we have arguably a 1 and 2 as good as any in baseball," Phillies owner John Middleton told PhillyVoice during the postseason. "I put Zack [Wheeler] and Aaron [Nola] up against literally any team. We have guys who are really superstars."

It seems illogical they'd let Nola go. Might as well try and get him at a discount now.