Will either make the big league club out of camp? 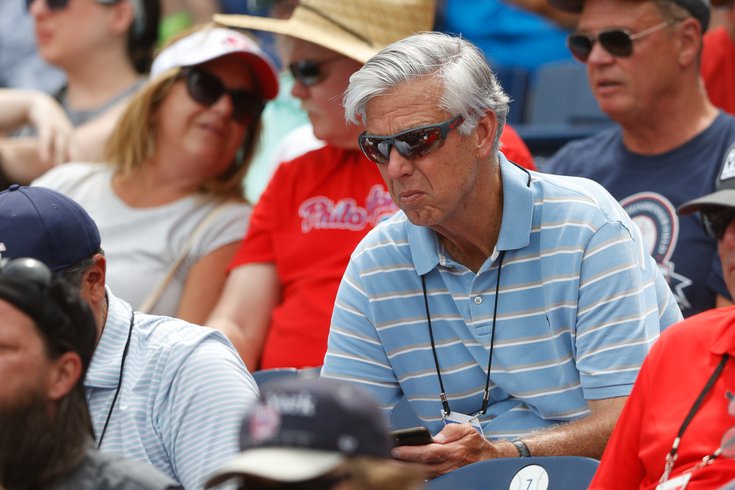 Phillies president Dave Dombrowski among the crowd during spring training down in Clearwater last March.

The Phillies announced their non-roster spring training invitees Tuesday morning and though it's already been known since November, the big league club put official confirmation on its three biggest pitching prospects coming with them for camp next month.

Righthanders Andrew Painter, Mick Abel, and Griff McGarry are among the 21 names who will be joining the Phillies down in Clearwater, likely setting up the scenario for one or possibly a combination of the three to crack the opening-day roster.

Painter, Abel, and McGarry are the Phils' No. 1, No. 2, and No. 4 rated prospects, respectively, and have each developed at a rate where the organization has been comfortable accelerating all three up through the farm system in the past year.

Painter, the Phillies' 2021 first-round draft pick and MLB pipeline's top righthander going into 2023, finished the season carving up Double-A hitters over in Reading at just 19 years old with a 2.54 ERA and 37 strikeouts in five starts.

Abel, the club's first-round selection in 2020, also kept pace in Double-A with a 3.52 ERA and 1.35 WHIP through several starts, but has had his focus more on developing specific pitches.

McGarry, who brings a fastball that can touch triple digits, finished 2022 pitching out of the bullpen for Triple-A Lehigh Valley, but may need a bit more time to get adjusted after posting a 9.00 ERA and 2.00 WHIP in seven appearances.

Much of the Phillies' 2023 roster already appears to be in place, but when team president Dave Dombrowski met with the media after the World Series run back in November, he acknowledged that there were still going to be a few openings to compete for, including a spot in the starting rotation for a "youngster."

"Those three guys will come to spring training with us," Dombrowski said back in November. "I can't say there's anticipation that they're going to make our rotation to start the season, some are further along than others, but they'll be in camp and once you're in camp, anything can happen.

"We are keeping a spot open for a youngster, and when I say youngster, I not only mean those three (Painter, Abel, McGarry)...Would [Bailey Falter] and [Cristopher Sánchez] fit into that category and anybody else who may join it? Could two? Perhaps two could, but we're really only looking at one."

Added manager Rob Thomson back then on either three's chances: "Time will tell with Painter and McGarry and all of those guys. They haven't even pitched in a big-league spring training game yet, so we'll let them do that first and see what the comfort level there is. Then it's a whole other animal once you turn the lights on out here (Citizens Bank Park) and pitch in this environment."

Pitchers and catchers will report to Clearwater on February 16.

Also of note is an invite to Scott Kingery. Once thought to be the second baseman of the future under Matt Klentak and Andy MacPhail's regime, the former top prospect was signed to a six-year, $24 million deal out of spring training in 2018 to secure his spot on the roster, though perhaps prematurely.

Due to injuries and general inconsistency, Kingery never found his footing at the big-league level and got lost in the shuffle once Klentak, MacPhail, and former manager Gabe Kapler were cycled out for Dombrowski and also former manager Joe Girardi.

Kingery, now 28, did get a call-up this past June, when the infield was near depleted at the time, but that lasted just a single game.

He's in the final year of his contract, with club options after that, at this point, the Phillies would be unlikely to pick up.