Phillies Notes: A platoon at first base and filling out the top of the order 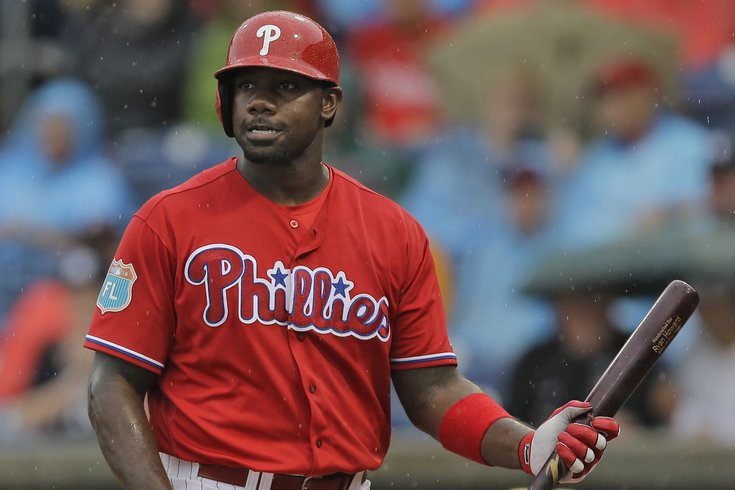 Phillies first baseman Ryan Howard will have to share his position with Darin Ruf to start the season.

It's no April Fools joke -- baseball has returned to South Philadelphia.

And yes, the official start of the 2016 season may still be a couple of days away, but it certainly felt like summer down at Citizens Bank Park. The temperature on the field topped 80 degrees, the pitchers were stretching their arms on the previously undisturbed outfield lawn and, of course, the crack of cowhide meeting ash echoed throughout a still empty ballpark.

As the players took the field for pre-game warmups, there were two guys taking practice at first base: Ryan Howard and Darin Ruf. Meanwhile, back in the clubhouse, manager Pete Mackanin was meeting with the media and informing them that should get used to seeing both players there this season.

Yes, Mackanin confirmed on Friday that Howard and Ruf will platoon to start the season.

When the Phillies open their season on Monday in Cincinnati, it will be Howard getting the start against Reds righty Raiasel Iglesias. Ruf will then start game two against lefty Brandon Finnegan.

"Opening Day against a right-hander, [Howard] is going to play first base," Mackanin said. "The lefty, the next day, Ruf is going to play. I'm going to start with a platoon and then we'll go from there. I feel Ruf deserves a chance as well with the spring that he had and what he did last year against lefties, he deserves an opportunity to get playing time also.

"But at this point -- it's like I told these guys -- if you want to play, you've got to play good. You've got to play better. That's the way I am going to start off and then we'll go from there.”

Here's a look at how their spring training numbers compare:

Howard was also better against pitchers throwing from the other side -- and better than Ruf against righties -- but he was nowhere near as effective.

Howard's totals against right-handed pitchers is inflated because he had nearly 200 more at bats against them than Ruf, but they had almost the same against lefties, and that's where you can really see the difference. If this winds up being a true platoon, with Howard only playing against righties and Ruf against lefties, here's an estimate  -- based on last year's stats -- of what you can expect out of the first base position this year:

It's not great, but it's certainly better than either player did on his own last season.

Because life is full of irony, just hours after Mackanin informed the press of his plan use a platoon at first base, both Howard [watch here] and Ruf homered. That -- on its own -- is not the funny part...

Ruf just hit go-ahead HR off a right-hander. Howard hit one earlier off a left-hander. What was Mackanin's plan again? #Phillies

After the game, Mackanin said he spoke with both Howard and Ruf about how he plans to use them this season. He also said that Howard accepted his decision but that he's "not crazy about the idea."

But what about the rest of the Phillies lineup -- and where Howard or Ruf will fit in to said lineup -- when they take the field against the Reds on Monday.

According to Mackanin, it's going to look a lot like the lineup Friday night against the Orioles ... minus Freddy Galvis at the top.

But Galvis led off for the second night in a row, and that's not necessarily a good thing for the 26-year-old infielder. Last season, he got off to a hot start, hitting .355 as late as mid-May, but then hit just .237 the rest of the way and finished with a .263 average. Things got worse this spring, as Galvis is hitting just .193.

The reason he again earned leadoff duties is because Mackanin wants to get him as many looks as possible.

“To be honest with you, Freddy is leading off because I want to get him as many at-bats as I can before the season," Mackanin said. "I don't anticipate him leading off for us, although I like the way the lineup looks that way."

If you want to read between the lines there, the Phillies manager is saying that he wants to play with a lineup that features Odubel Herrera and Maikel Franco batting three-four. But without a real No. 2 hitter -- Cesar Hernandez is "most likely" going to lead off this season -- Mackanin is begging Galvis to earn that spot. And so far this spring, he's done anything but that.

Galvis did, however, reach on a single and score in the bottom of the first inning, but that was his only hit in four at bats.

With only Saturday's exhibition game against the Future Phillies remaining, Galvis won't likely have enough time to prove to his manager that he belongs near the top of the order. And if that's the case, Mackanin will likely be forced to hit Herrera second and Franco third.

"Hernandez, Herrera, Franco [on Opening Day] and we'll go from there," Mackanin added. "All I see is that ninth inning comes around and I want my best hitters to come up to the plate. Let's say Franco hits fourth and I've got a lesser hitter hitting in front of him, I'd hate to not see Franco come to the plate with the game on the line. So I am trying to stack them.

"I know it's not the prototypical lineup, perhaps, but it could be depending on who the cleanup hitter is and how well he does. Four, five and six are just as important as one, two and three, but right now I'm trying to get the best hitters up as much as possible to get the most at-bats in a game.”

BAILEY AMONG FOUR SENT DOWN

Relief pitcher and New Jersey native Andrew Bailey tossed two scoreless innings (0 H, 1 K, 1 BB) against the Orioles. Prior to the game, Mackanin said they wouldn't make a decision on if he earned a roster spot until after he saw him pitch again.

“I challenged him to show me more velocity, which he did, and command of his stuff, so far," Mackanin said. "He's going to pitch [Friday] and [Saturday] possibly and I think we are going to try to get him in, we'll make a decision after today.”

Unfortunately for Bailey, those two scoreless innings weren't enough to keep him in Philly. After the game, Mackanin listed Bailey among four players who won't be traveling to Cincinnati for Opening Day -- the others are Will Venable, J.P. Arencibia, and Ernesto Frieri.

Mackanin also said that he hoped all four will stick in the Phillies organization -- but wouldn't make any guarantees -- and added that with the way players will be moving between Philly and Lehigh Valley this season, he expects to see Bailey and the others at some point in the future.