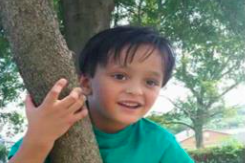 Allentown police are looking for a child with mental health issues who left a New Year's Eve party without proper winter attire.

Authorities say the 5-year-old boy went missing around 11 p.m. Thursday and was last seen near the intersection of S. Aubrey Street and E. South Street in the East Side section of the Lehigh Valley city.

The boy, identified as Jayliel Vega Batista by the Morning Call, suffers from autism, according to police, and may run away if approached.

He was not wearing shoes, socks or a coat when he disappeared.

A sister of the boy told the Call that it was unusual for him to run away. The newspaper reports that residents of the neighborhood were aiding in the search.

People who live nearby are asked to check their yards and sheds for Batista. Anyone with information on his whereabouts is asked to call the Allentown Communications Center at 610-437-7751.