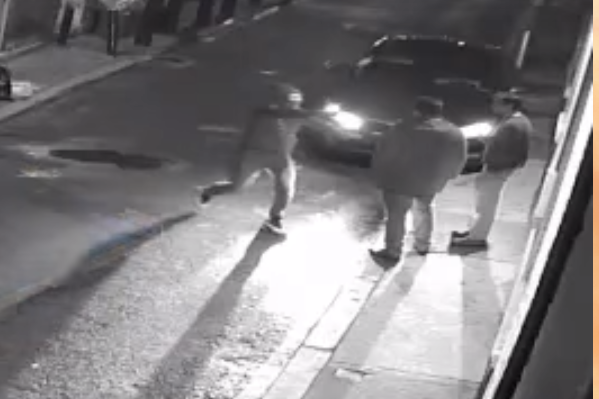 This screenshot from surveillance video shows one of the suspects wanted in a violent armed robbery in Old City on Friday, April 8.

Police are seeking two suspects they say were caught on surveillance video violently attacking two men and robbing them at gunpoint in Old City.

The incident occurred around 1:55 a.m. on Friday, April 8, on the 300 block of Bank Street, according to authorities.

Two men, ages 24 and 25, were walking down the street when the suspects exited a Kia Optima and approached them, police said.

One of the suspects, armed with a handgun, beat one of the victims over the head and demanded his belongings, and then the other suspect went into his pockets and grabbed his wallet, Samsung Galaxy cellphone and $200, police said.

The suspects then got back into the car and fled in an unknown direction.

Video of the incident can be viewed below:

The first suspect is described as a black male in his mid-30s who is 5 feet 8 inches tall with short hair and a thin build. Police said he was seen wearing a silver mask over the lower half of his face and was armed with the gun.

The second suspect is described as a black male with facial hair between 20 and 30 years old. He was last seen wearing a dark hoodie.

Police ask that if you see the suspects, to avoid approaching them and call 911 instead.

Tips can also be submitted by texting 773847 or by submitting an online form here. All tips will remain anonymous.