The Q&A ... with Phillies OF prospect Nick Williams 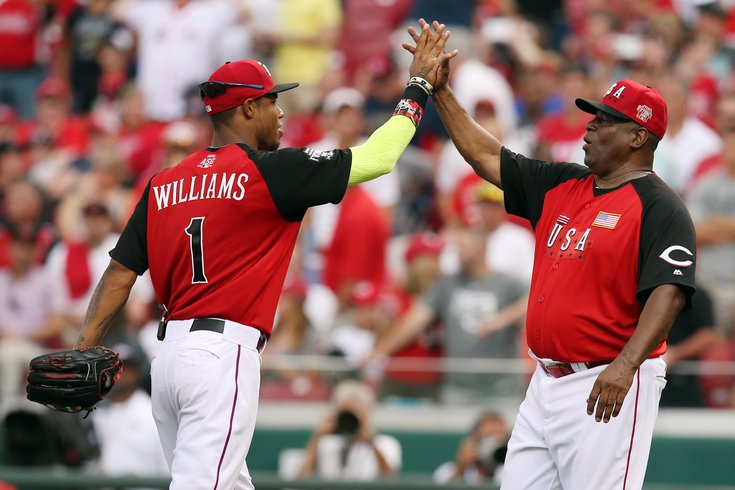 As the 2016 season nears -- or, at least the beginning of spring training nears -- it’s as good of a time as any to introduce a new, regular feature to our PhillyVoice Phillies coverage: The Q&A.

The goal of The Q&A is to get you the answers you aren’t likely to hear after a game or before batting practice, and instead the kind of stuff that might tell you a little bit more about the people within the Phillies organization, whether it’s players, coaches, prospects, or whoever else I run into on the beat.

Since this is sports, and sports should be fun first and foremost, the questions will be both serious and not-so-serious. The Q&A will try to inform, entertain, and give you a better look at the personalities within the Phillies.

And it’ll be interactive, too: at least one question will come from my (@ryanlawrence21) Twitter followers.

Leading off in 2016 for The Q&A is Nick Williams, the 22-year-old rising outfield prospect who came to the Phillies in last July’s trade that sent Cole Hamels to Texas.

Williams hit .303 with an .845 OPS, 17 home runs, 26 doubles, and 13 stolen bases in 119 games in 2015 between Double-A Frisco and Double-A Reading. Williams, rated the No.2 prospect in the Phillies farm system earlier this month by Baseball Prospectus, played all three outfield positions last season but played exclusively in center field when he arrived at Reading in early August.

Nick Williams: My personal goal is to make the big league team at some point. That’d be my goal.

I happened to be in Trenton when you played your second game after the trade. Did that second home run you hit that night ever land?

[laughs]  I didn’t even see where it went. I saw it got up, but it was just like "Wow." Because a lot of people say the ball doesn’t really fly there, either.

You were only there six weeks or so, but it seemed like that team at Double-A Reading was a really close-knit group, even right when you got there you were already a part of it, it was a dynamic where you were all like brothers?

It all just felt right. Everyone was comfortable with each other. I remember first walking in and everyone came and said, ‘Hey, what’s up.’ It wasn’t like I was just a young guy getting called up. They welcomed me with big arms. It just felt good.

Any baseball player you modeled yourself after growing up?

I don’t compare myself to anybody, but I can say the person I wanted to be like was Ken Griffey Jr. I remember having Griffey cleats when I was a kid. … I liked Torii Hunter. I didn’t watch much baseball growing up, but I remember when Bonds was on his record-breaking (tear), and I liked Bonds, I got to see him play in Houston a couple times. But I remember seeing Hunter rob him (of a home run) in the All-Star Game. That was awesome.

And I actually saw him once in Frisco (Texas) at the Shops of Legacy, but I didn’t say anything because he was with his wife. I was able to see him in real life, though.

You’re from Galveston, Texas, right on the water and where I read the climate described as “humid subtropical.” What was your favorite thing to do as a kid?

"I don't really have a favorite [football team]. ... I absolutely hate the Cowboys. I have a hate, and it’s the Cowboys."

So it’s going to be a goal of yours to be as big as him as an athlete?

You’re a big sports fan. Obviously you work for the Phillies, so you can’t say them. Who is your favorite team, regardless of sport?

In basketball I like the Thunder. I like Russell Westbrook, he brings a lot of energy. I compare myself to him as far as that. I like soccer a little bit. I don’t want to say I watch every game, but I like watching (Cristiano) Ronaldo and (Lionel) Messi. I like always watching the best player, just to see how they go about their business.

Did you play soccer in high school?

Yeah, I just liked it.

You’re from Texas, though, so it’s your birthright to be a huge football fan, right?

Are you going to say what team, or are you fearful of having Philadelphia fans possibly turn on you before you even arrive to the big leagues?

I don’t really have a favorite.

That’s a fair answer. Now if you would have said the Cowboys…

You just became the most popular prospect with the Phillies.

The cartoon movie about the ones inside a person’s head…

Yeah, "Inside Out." I watched in Dallas about a week ago.

Best thing you did this offseason?

Probably watching my little brothers play football. It was pretty funny and interesting.

How old are they?

So you’re the oldest?

Nah, I have an older brother seven years older than me.

@ryanlawrence21 Can he play QB or CB?

Oh for sure. I know I could play them at the college level, too.

What did you play in high school?

Receiver. But I used to play quarterback when I was younger.

If you had to choose one….

“Welcome to Houston” by Slim Thug.