Quinta Brunson's successful 2022 continues with 'People of the Year' honor

The Philadelphia native was honored by People magazine for her on camera accomplishments, including the Emmy-winning television show 'Abbott Elementary' 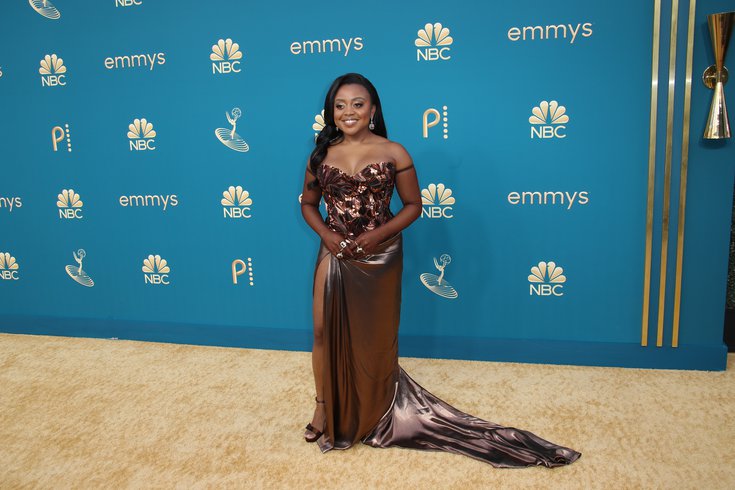 Philadelphia native Quinta Brunson was named to People magazine's 'People of the Year' list for her accomplishments on screen, including the success of the Emmy-winning tv series 'Abbott Elementary.'

It has been the year of comedian, actor, producer and writer Quinta Brunson. The West Philly native has continued her meteoric rise with an Emmy for her television series "Abbott Elementary," and accolades from Time magazine as one of the "100 Most Influential People." Brunson can now add "People of the Year" to her growing list of 2022 accomplishments.

Brunson received the title for her success on the screen, especially "Abbott Elementary," the hit show that was nominated for seven Emmys and won three, including Outstanding Writing for a Comedy Series. Brunson made history with her nod in that category, becoming the youngest Black woman to ever be nominated for comedy writing. She was also the first Black woman to secure three comedy nominations in the same year.

Bruson told People that she created "Abbott Elementary" because she wanted a comedy series that was funny to all generations — something her parents and grandparents would enjoy just as much as she would.

"Having the same laugh is really important to me. I think it's spiritual. I think it's healing," she said. Brunson added that she loves that so many people have found representation through the show.

Brunson recently sat down with Oprah Winfrey to discuss her rise to fame. She talked about how she does not believe in failure, the little details that matter when writing "Abbott Elementary" and the importance of keeping her married life private.

In August, Brunson and Warner Bros. agreed to an exclusive deal to create new projects. The multi-year agreement expanded on a partnership that began in 2018.

"Abbott Elementary" also secured an unprecedented streaming partnership deal with HBO Max and Hulu in July, which allows Hulu to continue to show new episodes of the series the day after they air on ABC. HBO Max, a Discovery subsidiary, secured rights to the entire season of the show once the finale has aired. Season one of the show made its HBO Max debut on Aug. 20.

The TV series is currently in its second season and will air 22 episodes, which Brunson said is a new challenge. The first season had 13 episodes, and they were all filmed before the show aired.

"It wasn't the same situation as it was last year," Brunson said. "We filmed and edited the first 13 episodes before the show even started. This year, that's not the case. We're filming. We're about to film the 16th episode, while the eighth episode is about to air, while we're mixing the ninth episode while we're writing the 20th one. So all this stuff is happening all at once, and somehow we are getting it in; somehow, people are still having a good time and enjoying the show, which makes me feel very accomplished and safe."

"Abbott Elementary" airs Wednesdays at 9 p.m. on ABC and can be streamed on Hulu the following day. You can also see Brunson play Oprah in the film "Weird: The Al Yankovic Story," which is available on the Roku app.