Calling all day drinkers: This concept just may be for you 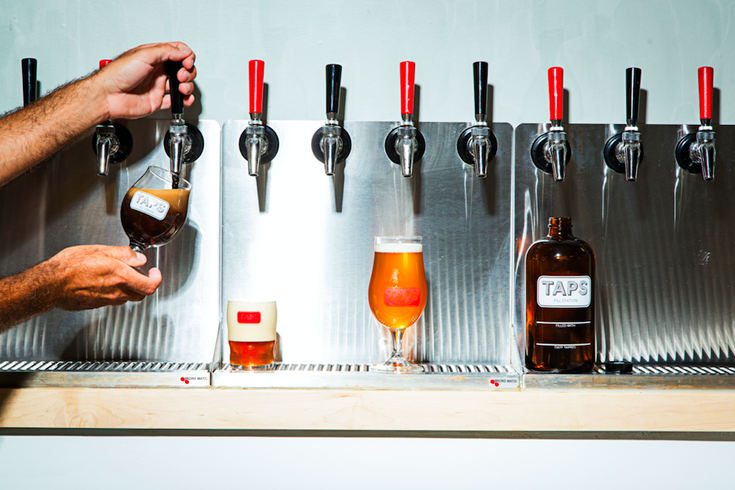 Taps handles at the soon-to-be TAPS Fill Station at the Bourse.

Come this summer, a TAPS Fill Station will be opening as part of the new food marketplace at the Bourse next to Independence Mall. Though Philly has a thriving bar and beer to-go scene, TAPS will be slightly different.

Not only will TAPS provide a selection of 21 beers on tap, they will also sell cider, wine, cocktails and mead, all on draft. Customers can enjoy a drink at the bar or take some booze to go in closed wine bottles or beer growlers.

Beer selections will come from the northeast and mid-Atlantic regions within a 250-mile radius. Every three months, they will rotate from state to state, including Pennsylvania, New York, Maryland and Delaware. Freewill, Victory and Troegs are three Pennsylvania breweries with whom the company currently has ties.

TAPS began in 2015 at Mount Vernon Marketplace in Baltimore, but Glass decided to bring an iteration to Philly because the two cities have similar kinds of people.

“We started in food halls because the history of markets in Baltimore is so strong,” Glass said.

“The first flag that flew in the war of 1812 was flown here in Baltimore, and Betsy Ross made the flag in Philadelphia,” Glass said.

“Edgar Allen Poe lived here and lived there,” he said from his Baltimore location.

Though some competition with local bars and bottle shops is inevitable, Glass believes his business will attract different kinds of customers.

Our hours will be more for the day-drinkers and people who want a nightcap if they’re staying at a local hotel.”

“We’re not going to be open until 2 a.m. like a traditional bar,” he said.

“Our hours will be more for the day-drinkers and people who want a nightcap if they’re staying at a local hotel.”

The fill station will be open until 10 p.m. Sunday through Thursday, and until midnight Friday and Saturday.

“That way, we can go out to the local bars and have a little bit of a life,” Glass laughed.

TAPS is also unique because it promotes the use of recycled materials. The bar front will be made from recycled plastic, and customers can return bottles and growlers for reuse, both for themselves and other beer-drinkers.

Though the Bourse has not announced an official opening date for its new food hall, TAPS is slated to open between mid-July and mid-August.