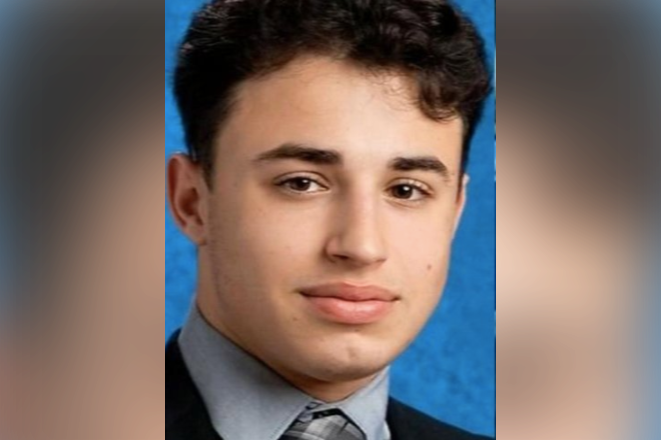 Salvatore DiNubile, 16, was one of two teens shot to death last fall after an apparent dispute.

The father of a 16-year-old St. Joseph's Preparatory School student who was shot to death in South Philadelphia last fall was arrested Monday after allegedly threatening a friend of the teenager accused of killing his son.

Philadelphia police said they arrested 43-year-old Salvatore DiNubile on Monday morning in connection with a confrontation they say took place a few weeks ago.

Police did not identify the man whom DiNubile allegedly confronted, but Philly.com reported on Tuesday that DiNubile recognized him as a friend of Brandon Olivieri's, the 16-year-old teen who was charged with fatally shooting DiNubile's son, also named Salvatore, and 16-year-old Caleer Miller.

The man told police that he was standing with his girlfriend at 11th and Shunk streets on Feb. 20 when the elder DiNubile, who was recognized as such by his girlfriend, drove by, asked the complainant for his name and drove off, authorities said.

After the man and his girlfriend walked to the man's house on the 2500 block of South Warnock Street and sat on steps outside the home, DiNubile is accused of then driving up to the home in his car and yelling, "F**k you, I'm going to kill you!"

"He then exited his vehicle, grabbed the complainant, and pushed him up against a car," according to a police report.

"The man then walked back towards his vehicle and the complainant went inside his house and locked the door. The offender then grabbed the complainant's mailbox and struck the door with it several times. The complainant did not suffer any injuries."

Frank Keel, a friend of the DiNubile family, told Philly.com that DiNubile only confronted the man after he told DiNubile to "Get over it, everybody dies" and then spit in his direction. Keel said DiNubile took the comment as a reference to his late son.

DiNubile was charged with terroristic threats, simple assault and reckless endangerment of another person, police said.

The confrontation is the latest in a series of incidents that have resulted from the killings, which are believed to have stemmed from a social media feud.

DiNubile was on one side of the dispute while Olivieri, Miller and at least one another teenager at the scene were on the other. Olivieri allegedly intended to shoot DiNubile near the corner of 12th and Ritner streets on the night of Oct. 24, but a stray bullet also struck and killed Miller, investigators said.

Before Olivieri's arrest, the teenager's South Philly home was riddled with bullets. There were no injuries. Philly.com also reported that the 15-year-old witness who had been with Olivieri and Miller that night became hostile toward prosecutors at Olivieri's preliminary hearing in December and would not answer questions.

The killings shocked the city and sparked a candlelight vigil for the victims that drew hundreds of people to the scene one night later.

Oliveri, whose attorney has said will fight the charges, remains in Philadelphia jail. A pre-trial conference is set for March 28.