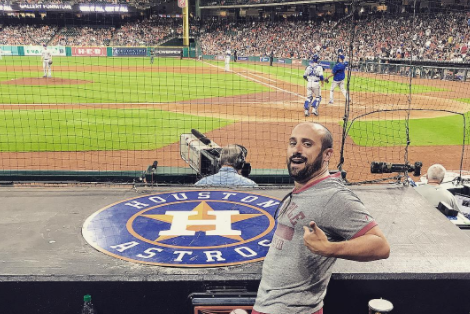 Andy Sturt figured it out just in time for summer.

The Chicago native is a graduate student at Temple University’s School of Sports, Tourism and Hospitality Management who needed to complete a pretty major summer research project.

Naturally, he combined the two in a summer-long undertaking to visit, study and compare all 30 of Major League Baseball’s ballparks.

“It’s the ultimate ‘American Dream’ bucket-list trip,” he said. It was then that Sturt mentioned that this trip he also visited 21 national parks, bested his fear of heights with some skydiving, roamed lost in California's High Desert for hours, saw the total solar eclipse in the Smoky Mountains last week and made some friends along the way.

But the compelling part of Sturt’s story centers around how he went about it.

He doesn't just visit each park, take in the sights, grab a hotdog and write down his experiences. He documents what he sees through pictures and perspective, and he broadcasts each step of his journey to Instagram and his blog.

With each post updating his followers on where his trip has taken him, reaction and words of encouragement from commenters have increased. Before he knew it, Sturt's Instagram account had grown from 200 followers to 75,000.

“I’m kind of shocked by it,” he said of the following. “But it’s pretty cool.”

A few teams even picked up on his journey, he said.

A sideline reporter interviewed him at a Florida Marlins game, and the team’s television broadcast aired a video package documenting Sturt’s project.

At a Texas Rangers game, he was invited for an impromptu cameo on the team's Spanish telecast, where they had a translator there to help him, he said.

He also began to receive unexpected messages from people who became aware of his journey.

“I wanted to stay away from the LGBT stuff, but as my following grew I was encouraged to make a big deal of that,” he said.

Eventually, he said, a 12-year-old who identified himself as a member of the LGBT community reached out to Sturt. The 36-year-old was an inspiration to him, the boy said.

‘”As a young member of your community, I didn’t know there was any possibility of doing stuff like that and being involved in sports,’” Sturt recalled the boy said. Those experiences, Sturt said, “are gold to me.”

At each ballpark, Sturt has a routine. First, before the game, he takes a lap outside the stadium to see if it offers any live music or activities or if it has sponsoring vendors handing out free T-shirts.

He usually then makes another round trip inside the stadium on the concourse before taking his seat – typically in the bleeders. He takes in some baseball from up there until moving to different seating areas around the stadium – from the furthest seat from the action to a cozy view behind home plate.

A trek to check out food options, memorabilia offerings, kids’ zones, monuments and other cool attractions also was a must.

So far, Sturt has seen 20 ballparks, and two stand out above the rest Kauffman Stadium in Kansas City and Safeco Field in Seattle. But he still has some notable fields to see, including Fenway Park, Yankee Stadium and Camden Yards.

He did say, though, that historic Wrigley Field in Chicago didn’t cut it in terms of fan experience. (Sturt's a Cubs fan, by the way.)

And for those of you wondering, his visit to Citizens Bank Park in South Philadelphia on Saturday went well.

Not only did that game include Rhys Hoskins clubbing his ninth home run in his 16th major league game, but Sturt loved “The Bank” for its collection of autographed memorabilia for sale and its view of the late-summer sunset.