Ryan Long competes in first round of 'Jeopardy!' Tournament of Champions on Monday

The Philadelphia native won 16 games and just under $300,000 during his stint on the game show which aired last summer 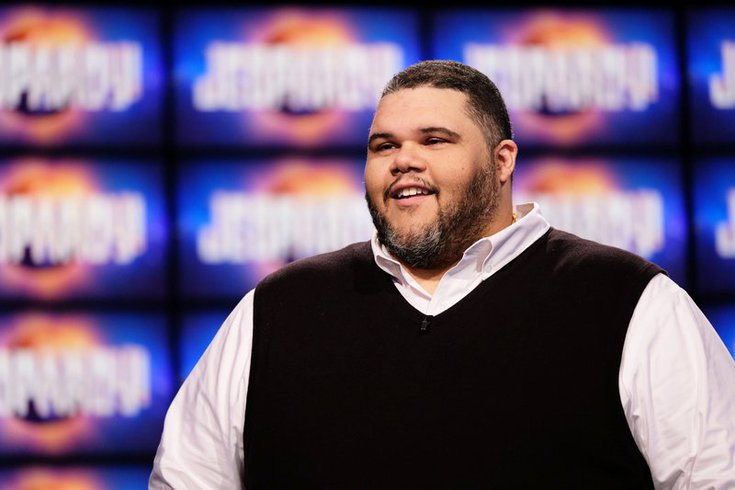 Ryan Long, a 16-time "Jeopardy!" winner from Mt. Airy, will compete in the first round of the Tournament of Champions in an episode airing on Monday. If Long wins, he'll earn a spot in the semifinals.

UPDATE: Ryan Long did not win on Monday's first round episode of the "Jeopardy!" Tournament of Champions, instead placing second in an upset that will end his tournament appearance. Maureen O'Neil emerged victorious, and will continue on to the semifinals.

On Twitter, Long expressed his gratitude for the experience: "Welp, I guess I won’t get to be part of Champ Season in Philly now lol…but I have zero regrets. I got to live a dream and I am so lucky to have been able to do that."

A local quiz show star is making his highly-anticipated debut in the "Jeopardy!" Tournament of Champions on a busy Halloween that also sees the Phillies play World Series Game 3 at Citizens Bank Park.

Ryan Long, a former ride share driver from Mt. Airy, easily secured himself a spot in the prestigious tournament last summer through a 16-game winning streak that earned him just under $300,000. He makes his Tournament of Champions debut in the first episode of the first round on Monday night.

In the quarterfinals, which features 6 games and 18 top players from the most recent season of "Jeopardy!," Long will face Megan Wachspress, an environmental attorney from Berkeley, CA, and Maureen O'Neil, an executive assistant from Cambridge, MA. Wachspress won six games and O'Neil won four.

Two of the 18 competitors in the tournament come from the show's new "Second Chance" competition, where select "Jeopardy!" contestants who lost in their initial appearances had the chance to battle it out for a spot in the Tournament of Champions. Based on the outcome of the two-week tournament, which finished last week, Jessica Stephens, a statistical research specialist from Nashville, and Rowan Ward, a chart caller, writer and editor from Chicago, will be joining the tournament.

If Long wins Monday, he would advance to the semifinals, which includes 3 games and 9 players. Under this year's new tournament format, there are three seeded players who have automatically advanced to the semifinal round. They are Amy Schneider (40 wins), Matt Amodio (38 wins) and Mattea Roach (23 wins). These players are "so far ahead of the curve" that they were kept out of the quarterfinals to even the playing field, Executive Producer Michael Davies said on the "Inside 'Jeopardy!'" podcast.

All three semifinals winners advance to the final round, which will be at least 3 games long but could go as long as 7 games. The first player in the finals to reach 3 wins becomes the tournament champion. Sam Kavanaugh, a substitute teacher from Carlton, MN, won the 2021 Tournament of Champions, earning the $250,000 prize.

Long expressed feelings of pride for his tournament appearance in a post last Monday.

It's going down in the TOC! Proud to be part of this historic season. (Also, can I just say, of all the wonderful people I met during ToC, I must convey my love for @MargOnJeopardy. She's even more awesome in person, funny as hell and unfiltered in all the best ways.) #jeopardy

He also shouted out fellow contestant Margaret Shelton, a homemaker from Pittsburgh, for her humor and authenticity. Shelton competes in the quarterfinal round of the tournament on Wednesday.

The Second Chance competition and Tournament of Champions are interrupting the historic run of a South Jersey "Jeopardy!" champ. Cris Pannullo, a customer success operations manager from Ocean City, who previously competed on ABC's "Who Wants to Be a Millionaire?," is currently on an 11-game winning streak that has brought him $356,702, so far. Fans can see Pannullo again later in November following the completion of the Tournament of Champions.

Regardless of Long's success in the tournament against formidable opponents, he'll always be Philly royalty. In September, in honor of his accomplishments, he was presented with a miniature Liberty Bell by Mayor Jim Kenney during a ceremony at City Hall.

Long took to Twitter after the ceremony to describe how much his life has changed since his "Jeopardy!" run.

Life is funny…last time I was down City Hall, I was living with my brother when I tried (and failed) to prevent the sheriffs sale of his foreclosed house. Now I’m down here shaking the Mayor’s hand and getting the key (well, Liberty Bell) to the city. Ka is a wheel… #jeopardy pic.twitter.com/piue7QQUvd

The last time he was at City Hall he had unsuccessfully tried to prevent a sheriff's sale of his brother's foreclosed house, where he was living, according to the post. But last month, he was there to shake the mayor's hand and receive a "key" to the city.
Long's "Jeopardy!" success came during a tough period in his life. He was hospitalized for weeks due to COVID-19, forcing him to leave his job as a SEPTA paratransit driver. To make ends meet, he became a driver for Uber and Lyft. That all changed when he went on "Jeopardy!" and became one of the most successful and beloved contestants of the season.

The quiz show star has been keeping very busy lately. Long surprised fans when he showed up on an episode of the spin-off "Celebrity Jeopardy!" which aired Sunday, Oct. 23, and is now streaming on Hulu. During a category called "Around Philly with Ryan Long," Long delivered Philadelphia-themed video clues while driving around the city, reminiscent of his former career.

Long wore an Eagles jersey while delivering the clues, and has continued showing his appreciation for Philly sports on social media during an exciting time of success for local teams and Long's own preparation for the Tournament of Champions to air.

WHAT A GAME! (Despite the usual attempted Astros shenanigans) #RingTheBell

Monday night, Philadelphians can root back-to-back for Long on "Jeopardy!" at 7 p.m. on ABC, followed by the Phillies at 8:03 p.m. on FOX.