Erica Weiner-Amachi, who lost during a tie-breaker in July, will appear on tonight's show at 7 p.m. 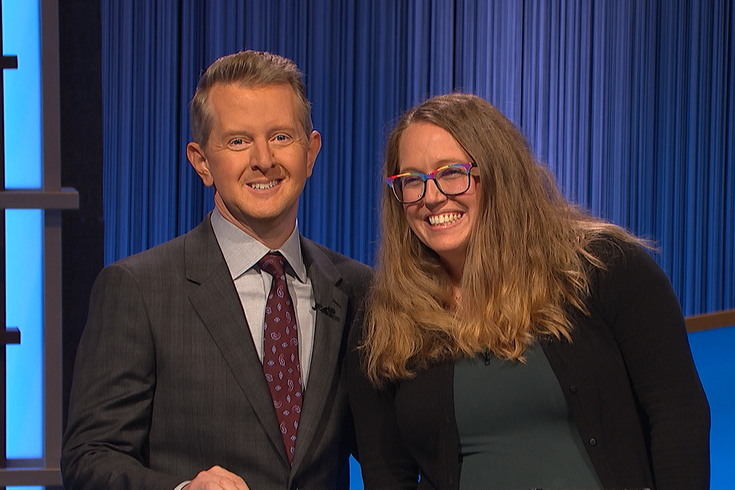 This week marks the start of the new "Jeopardy!" Second Chance competition, which gives contestants who lost in their initial appearances in Season 38 the chance to battle it out for a spot in the upcoming Tournament of Champions. Erica Weiner-Amachi, a fourth grade teacher at KIPP Philadelphia Public School, will compete Tuesday to avenge her Final Jeopardy tie-breaker loss last summer.

UPDATE: Philadelphia teacher Erica Weiner-Amachi did not win on Tuesday night's episode of the "Jeopardy!" Second Chance competition, and will not be continuing on to the Tournament of Champions.

Weiner-Amachi went into Final Jeopardy with $12,800, which put her in the lead by $1,400. Unfortunately, she answered the question about cloned apple trees incorrectly and her large $11,000 wager knocked her into second place. Molly Karol, a CPA from Austin, Texas, won the game and will continue on to the tournament.

Imagine spending years preparing for an appearance on "Jeopardy!" only to show up and face the likes of Matt Amodio, Mattea Roach, Amy Schneider, Ryan Long or any other quiz show titan who was on a roll this season.

This disheartening, yet all too common, occurrence has prompted the introduction of the "Second Chance" competition, in which select "Jeopardy!" contestants who lost in their initial appearances in Season 38 have the chance to battle it out for a spot in the upcoming Tournament of Champions.

Erica Weiner-Amachi, a fourth grade teacher at KIPP Philadelphia Public School, will compete Tuesday to avenge her Final Jeopardy tie-breaker loss from this past summer.

Weiner-Amachi has taught at KIPP since the 2008-09 academic year. Before that, she was a Teach for America corps member in Atlanta, Georgia, according to a Facebook post. She received a master's degree in Educational Leadership from Kennesaw State University in Georgia after studying history and elementary education at Vassar College in Poughkeepsie, New York.

If Weiner-Amachi wins Tuesday, she'll join Monday's Second Chance winner, Jessica Stephens, and Wednesday's winner in the two-day final round of the competition, airing Thursday and Friday. Whoever holds the highest cumulative dollar amount after the two-day finals earns their spot in the illustrious tournament.

Next week, another set of hopefuls will try their hand at redemption.

Weiner-Amachi competes tonight against Tracy Pitzel, an accountant from Ellensburg, Washington, and Molly Karol, a CPA from Austin, Texas.

Don't call it a comeback 👊

It all came down to Final Jeopardy, which featured a clue about the play "Waiting for Godot." All three contestants answered correctly. Fiasco fell a dollar short with $15,600, while Chou and Weiner-Amachi both ended up with $15,601, sending them to a nail-biting tie-breaker for the first time in 103 games.

🚨 Reset the counter! After 103 games, we've got another TIE BREAKER! 🚨 pic.twitter.com/8wmXzPfoTe

The rare "Jeopardy!" tie-breaker involved host Ken Jennings revealing a category and single clue. The first contestant to buzz in with the correct answer would win the game. The category was "Biographies" and the clue was: "'The Passage of Power' covers 1958 to 1964 in Robert Caro's 4th volume on the life of this American."

Both players attempted to buzz in, but Chou was quicker and provided the correct answer, "Lyndon Johnson," ending Weiner-Amachi's "Jeopardy!" campaign – or so she thought.

If Weiner-Amachi makes it through to the Tournament of Champions, she'll be joining another Philadelphia contestant. Ryan Long, a former rideshare driver from Mount Airy, will be a top contender in the tournament. He had a thrilling 16-game winning streak that earned him just under $300,000, and was honored by Mayor Jim Kenney at a ceremony last month.

The Second Chance competition, and subsequent Tournament of Champions, are interrupting the historic run of a South Jersey "Jeopardy!" champ. Cris Pannullo, a customer success operations manager from Ocean City who previously competed on ABC's "Who Wants to Be a Millionaire?", is currently on an 11-game winning streak that has brought him $356,702, so far.

Tune in to ABC tonight at 7 p.m. to find out whether Weiner-Amachi takes one step closer to the Tournament of Champions (and whether she once again dons her unique rainbow-rimmed glasses).