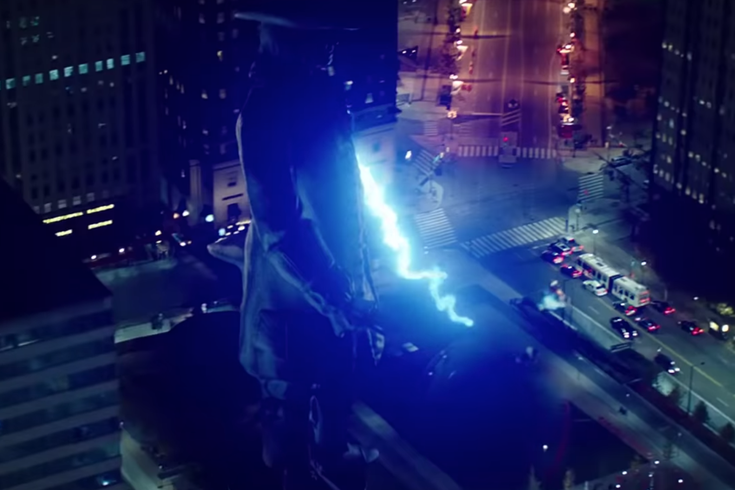 The William Penn statue meets its demise in "Shazam!".

For decades, Center City's likeness of William Penn stood above every building in Philadelphia, perched atop City Hall like a guiding light.

In this year’s superhero movies, “Shazam!”, which was filmed in Philadelphia, the legendary statue gets blown to bits.

A new trailer, cut for the Chinese movie market, was released Wednesday featuring some not-yet-seen footage from the film, which stars Zachary Levi and Asher Angel and opens in theaters April 5.

At the 0:52 mark of the trailer, Levi’s character Billy Batson — who is also the titular superhero, Shazam — is in a heated battle with someone who appears to be the film’s bad guy.

The cinematic aerial shot shows the two battling, with the Benjamin Franklin Parkway behind them, soaring over the Philadelphia Municipal Services Building, and eventually taking out the legendary statue atop City Hall:

The trailer features plenty of other Philly backgrounds and items, like the city’s skyline, its omnipresent SEPTA buses, and the iconic Art Museum stairs. The Art Museum scenes were filmed back during a one-day shoot in early December.

While it’ll be hard to top destroying Billy Penn, “Shazam!” Isn’t the only movie which filmed in Philadelphia in 2018 and is set to debut this year. “17 Bridges”, featuring “Black Panther” star Chadwick Boseman, hits theaters July 12. The movie filmed in Center City near Rittenhouse Square back in October, and was also spotted filming in Chinatown in the same month.

Meanwhile, we’re still waiting to see where this fake December car crash at Rittenhouse Square will be featured.