Syndergaard aside, Phillies offense is struggling

Just as Thor throws his hammer, Syndergaard fires his fastball over and over. The New York Mets ace (well, one of them) was compared to the unfair player that you create in a video game as a kid with all attributes maxed up to 100 by teammate David Wright. It’s like facing an elite closer, except in the first inning:

“With a guy like that who can throw his pitches for strikes, you know you’re going to get a pitch to hit,” Rupp said. “It ain’t easy. With him, he’s got good stuff and he showed it off tonight.”

All of this is to say that there is little shame in the Phillies’ offensive performance in the 5-2 loss to Syndergaard and the New York Mets on Monday night at Citizens Bank Park. The Phils actually raised “Thor’s” ERA on the young season to 0.90.

Problem is, it’s not just elite pitchers like Syndergaard that the Phils are having major trouble scoring runs against. Coming into Monday night’s game, they were averaging just 2.62 runs per game, behind every team in the majors except the Minnesota Twins.

“We’re just not getting the job done at the plate,” Rupp said. “The scores show it, we’re winning games 3-2, 1-0, 2-0. It’s our pitching that’s helping us win games and we’re just slowly chipping away and hopefully it’ll come around.”

“We’re just not scoring enough runs,” Pete Mackanin said. “They hit four home runs, we didn’t hit any. We got to score more runs, we’re in all the games we’re playing except a few and we just need to score.”

The Phillies have started the season 6-8, surprisingly buoyed by excellent starting pitching outside of a few rough outings against Washington over the weekend. The lineup struggles were predictable, though. To get a sense of Mackanin’s current predicament, examine the team’s best offensive player on the young season.

If you paid even a little attention to Herrera during the early months last season (pic below), the difference in plate discipline between now and then is striking. Night and day, some would say. The former Rule 5 pick came into the game with a 22.6% walk rate, good for third in the majors among qualified players. 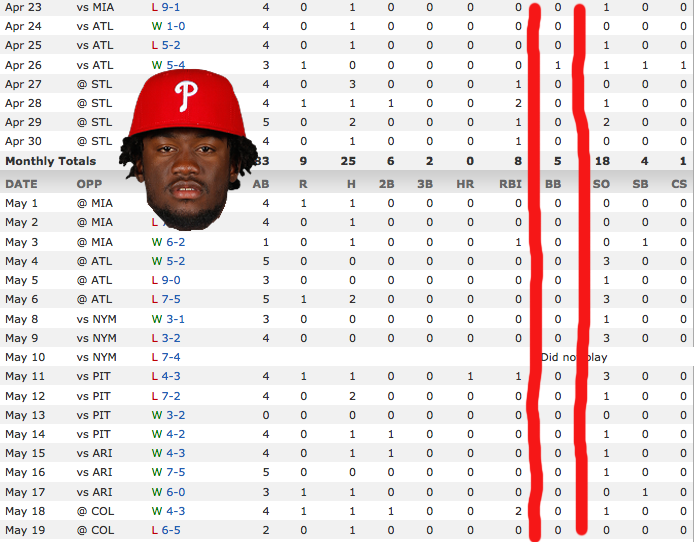 (Believe it or not, June and July were even worse.)

Herrera isn’t exactly crushing the ball (.250 BA), just like the rest of his teammates, but his patient approach at the dish has made him a very productive player regardless. Late in Thursday’s game, Herrera worked a walk against Antonio Bastardo, his 13th of the season. The 24-year-old center fielder got his 13th walk of last season on August 14th.

“I love to see him when he draws a walk, he claps his hands and he’s happy to draw walk which gives you a good indication of what he’s all about,” Mackanin said. “He’s a winning player, he wants to get on base.”

Even if Herrera’s walk rate should come back to earth at some point, isn’t he the prototypical leadoff man with an excellent eye and great speed? Not necessarily, not in a lineup that also could use him closer to the middle of the order.

“We need hitters in the middle of the order,” Mackanin said. “We need hitters up and down the order. We just need more offense, it’s as simple as that, obviously everybody can see that. But we’ll get there.”

Mackanin believes Maikel Franco, who is 2 for his last 20 after a hot start, is overswinging. It sure looks that way. Could the pressure of trying to carry a subpar lineup be getting to Franco?

“I don’t know what’s in his his head,” Mackanin said. “We just need more than one guy to swing the bat better.”