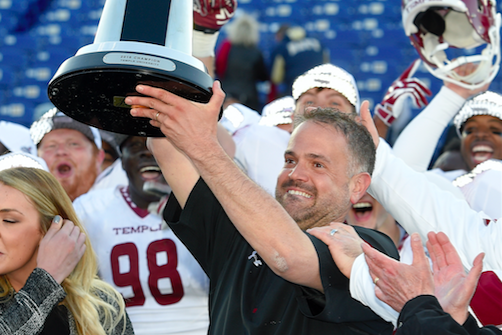 The man credited with putting Temple football on the map will be leaving the Owls to take a coveted head coaching job at Baylor University.

A long line of speculation about Matt Rhule's future, including hopes for loyalty and lofty predictions of an NFL return, came to an end on Tuesday when Baylor officially announced Rhule had accepted the job.

OFFICIAL: We have our new Head Football Coach. Welcome to Matt Rhule and his family. #SicEm 🏈

Rhule ascended the ranks at Temple after starting with the Owls as an assistant coach in 2006. He briefly joined the New York Giants as an offensive line coach before returning to North Philadelphia in 2012. Over four years, the Owls have gone 28-23, but it was Rhule's 20-7 record over the last two seasons that propelled him into rumors about head coaching vacancies.

"We could not be more excited to welcome Matt, Julie and their children to the Baylor Family," said Mack Rhoades IV, vice president and director of intercollegiate athletics at Baylor University. "When we set out on our search for a new leader of our football program, we wanted a coach who shared our values, who had demonstrated success, who showed a true commitment to the overall student-athlete and who we believed could lead Baylor to a national championship. We found all of that and more in Matt and I know that he will be a perfect fit with the Baylor Family."

News of Rhule's departure came as a shock to many on Tuesday, just a few days removed from Temple's 34-10 AAC Championship victory over Navy. The 24th-ranked Owls will next take on Wake Forest in the 2016 Military Bowl on Dec. 27. Ed Foley, the Owls' director of football operations, will take over as interim head coach.

"I am truly honored and humbled to join the Baylor Family," Rhule said in a statement. "I can't thank President Garland and Mack Rhoades enough for this incredible opportunity. Baylor is a tremendous institution with a history of football success and I know the passion that so many have for the Bears will help bring the community together to reach even greater heights. I am excited to get started."

Some Temple fans reacted to Rhule's decision to leave with sadness and frustration.

& #Temple coach Matt Rhule has left the school for Baylor. Sadly, Temple football will never be more than a stepping stone for most coaches

Last December, Rhule told SportsRadio 94WIP that he planned to remain at Temple, but that he never promises anything and he would always make the choices he felt were best for him and his family.

Rhule, who will be introduced at Baylor on Wednesday, must now take over a Bears team that was rocked by a rape and sexual assault scandal that resulted in the suspension and eventual dismissal of head coach Art Briles. Baylor ended its 2016 season on a six-game losing streak.

"This a great day for Baylor University and the beginning of a new chapter in our football program," said Interim President David Garland. "Matt is the absolute right man at the right time to lead us forward and I am confident that his values are our values and that his teams and student-athletes will make us all proud, on and off the field."

For Temple, perched at a high point with their conference title, the search for a new head coach who can live up to Rhule's accomplishments begins immediately.

"We'll take our time to find the right person," said Patrick Kraft, director of athletics at Temple. "This is a great job that's different from what it was before. We have proven we can win."

Kraft praised Rhule's ability to engage with the Philadelphia community and motivate his players to excel in both sports and academics. While Rhule's loss is a concern for Temple's recruiting, Kraft said the goal is to find the best student-athletes that fit into the university's vision.

"We are not just a football program," Kraft said. "We are a part of Temple University."

Last week, Temple announced that the Owls will continue to play home games at Lincoln Financial Field through 2018 as the university evaluates the impact of a controversial stadium proposal in North Philadelphia. Kraft said losing Rhule shouldn't have any bearing on what happens with the stadium.

"We don't build the stadium for an individual," Kraft said. "The staudium is a decision that involves the community, the university and trustees."