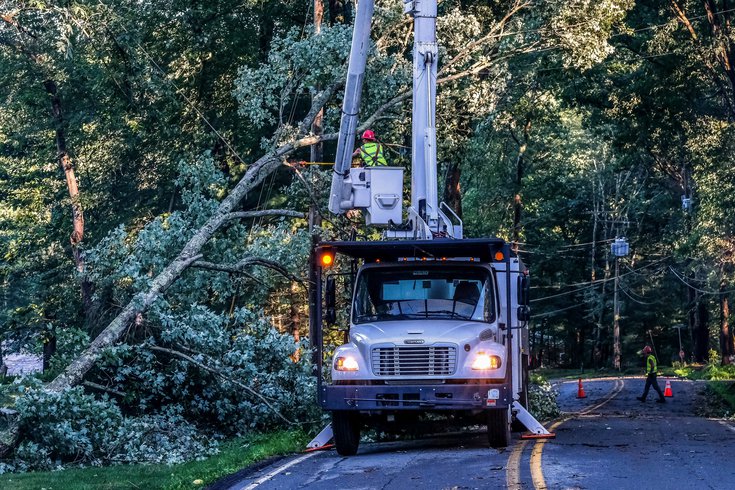 Heavy rain and strong winds from Tropical Storm Isaias brought about flash flooding, downed power lines and trees, tornadoes in several locations, and widespread damage to homes, buildings, and cars across the Philly region on Tuesday.

It also caused thousands of residents to lose power during the storm. However, with Isaias having passed through the region, thousands still remain in the dark and have yet to see their power restored.

Almost 150,000 residents across Southeastern Pennsylvania and South Jersey are still without power, according to outage maps provided by Atlantic City Electric, PECO, and PSE&G.

Additionally, it’s unclear at this point when many residents will have their power returned. While some power outages are still being assessed by the utility providers, other residents may not have their power fully restored for a number of days due to the impact of the storm.

At the peak of the storm on Tuesday, almost 600,000 residents across the Philly region were without power.

The inclement weather led to both a flash flood and tornado watch, as well as a tropical storm warning and coastal flood advisory, being issued for the entire region. New Jersey declared a state of emergency too.

The storm also forced both SEPTA and NJ Transit to modify or suspend services, as well as PennDOT to implement speed limit restrictions on roadways across the region.

Widespread flooding across the city led to a shut down of several other roads, including Kelly Drive between the Art Museum and Falls Bridge and Cobbs Creek Parkway between 70th Street and Baltimore Avenue.

Additionally, a flood warning was put into effect for the rapidly-rising Schuylkill River, where a construction barge that had become dislodged by the tropical storm conditions got stuck underneath the Vine Street Expressway Bridge.

As a result, I-676 remains closed in both directions from I-76 to Broad Street until further notice. The highway is expected to reopen once water levels recede and the barge can be removed.