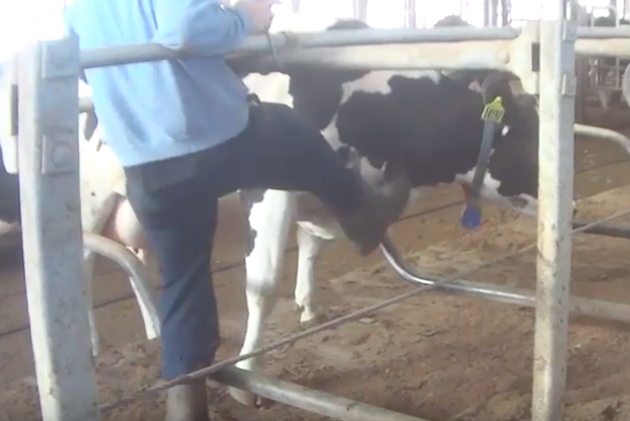 Employee at Gettysburg-based Mason Dixon Farms filmed kicking a cow during an undercover visit some time in April 2017.

An employee at a Gettysburg dairy co-op was fired this week after an animal welfare organization released an undercover video depicting abuse of cows at various locations on the factory farm.

Compassion Over Killing, a national animal rights nonprofit, published the following video after a visit to Mason Dixon Farms, whose livestock numbers 2,500 cows. The farm employs robotics to milk approximately half of its cows and serves companies including Kraft Heinz, Dairy Farmers of America, Land O’Lakes and Leprino Foods (the latter is the world's largest mozzarella cheese-maker and a supplier for Papa John’s, Little Caesars, Domino’s and Pizza Hut).

An investigator on site at the farm described numerous instances of cruelty to animals, including cows getting kicked in the face, punched in the udders, excessively shocked with electric prods and jabbed with pens or elbows. Living conditions for the animals and occupational hazards were also documented during the investigation.

Compassion Over Killing also alleges cows at Mason Dixon Farms produce up to 25 gallons of milk a day, more than twice the average produced at other farms.

"This is the devastating reality of where milk comes from, and as a mother, I am especially saddened to see gentle mother cows being systematically exploited and abused by this industry, Cheryl Leahy, general counsel of Compassion Over Killing, said in a statement.

The Dairy Farmers of America, the nation's largest milk marketing cooperative, acknowledged the dismissal of an unidentified employee at Mason Dixon Farms but criticized Compassion Over Killing for what it called "highly edited" footage from a visit that took place several weeks ago.

“Recently, we learned that activist group Compassion Over Killing reported allegations of animal mistreatment at a Dairy Farmers of America member farm in Pennsylvania," read a DFA statement. "The dairy industry and our individual farm owners do not tolerate abuse of any kind. Immediately upon learning about this allegation, we initiated a third-party audit to investigate the claim. No evidence of abuse or mistreatment was found in this audit.”

Compassion Over Killing submitted its evidence to local authorities and undisclosed charges have since been filed against the terminated employee.

"Our heartbreaking video exposes horrific animal cruelty at Mason Dixon, a supplier to some of the biggest names in dairy," Leahy said.

DFA claims the video is a distortion and does not represent what happens on America's dairy farms. It also questioned the tactics used by Compassion Over Killing to investigate conditions on the farm.

“Anyone who truly cares about animals would not go undercover and observe, incite or fail to immediately report incidents of abuse. We encourage anyone who suspects animal abuse on our dairies to report — not record — that abuse.”

Compassion Over Killing focuses both on preventing animal abuse and promoting vegetarianism. Their mission "to build a kinder world for all of us" fundamentally takes exception to certain basic practices of commercial dairy farming.

“Like human mothers, cows form incredibly strong bonds with their babies, but in the dairy industry, these bonds are shattered," Leahy said. "As a mom, I shudder when I think of the calves systematically torn from their mothers time and again so the milk intended for these baby animals can be sold for human consumption.”

Editor's Note: Chobani was originally included in this report, as alleged by Compassion Over Killing, among the companies supplied by Mason Dixon Farms through its association with Dairy Farmers of America. On Thursday, a Chobani spokesperson denied that any of its dairy originates at Mason Dixon Farms.