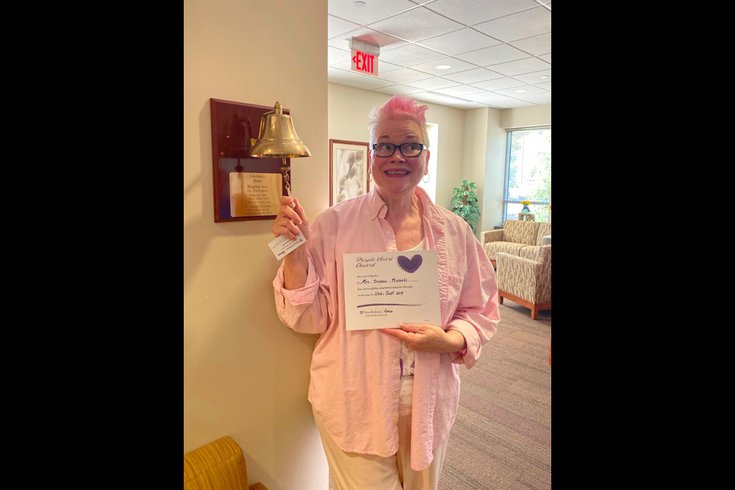 A cancer diagnosis can crowd the mind with hundreds of questions and what-if scenarios.

Susan Rosati, 73, of Sicklerville, New Jersey, knows the feeling all too well, having received back-to-back vulvar and breast cancer diagnoses. But she pushed onward by relying on positive thoughts and trusting the expertise of her doctors.

Now, she's cancer free and sharing her story to stress the importance of cancer prevention.

Two years ago, Rosati said she started feeling that "something just wasn't right." She was extremely tired and experienced a painful, burning sensation when she urinated.

Her gynecologist initially couldn't identify anything wrong. Yet, she continued to experience the same symptoms. A biopsy later confirmed she had vulvar cancer, a rare gynecologic cancer that typically affects older women.

Rosati was referred to Dr. Randolph Deger, a gynecologic oncologist at Virtua Health who diagnosed her with bilateral vulvar cancer. Rosati had numerous questions about her prognosis and treatment. Deger answered every one, instilling a sense of confidence as she approached the journey ahead.

"Of course I was scared," Rosati said. "Cancer is alarming. My mom had ovarian cancer and my sister colon and breast cancer, so I thought now it was my turn. But after Dr. Deger explained my diagnosis and treatment, I was ready to tackle it and keep on living."

Rosati had surgery in November 2018. She spent three weeks at a rehabilitation center to increase her mobility before going home before Christmas.

But by March 2019, Rosati was facing a new cancer battle. A mammogram revealed a suspicious area in her breast. She eventually was diagnosed with ductal carcinoma in situ, a non-invasive breast cancer that had not spread beyond the milk ducts.

Rosati had a lumpectomy to remove the tumor and surrounding tissue in May 2019. On Sept. 23, she was able to "ring the bell" to celebrate the end of her radiation treatment.

Throughout her recovery, Rosati said she was determined to live life to the fullest. She focused on her daily tasks and completing the next steps of her cancer treatment.

Her mantra was to keep looking forward, Rosati said. She set goals to achieve during her recovery, like dancing at her daughter's wedding in January 2019 and getting back into the kitchen to cook – her passion. She eventually dyed her hair pink to symbolize her victory over cancer.

Rosati credited her "prayer warriors," and an attitude that her glass is "always more than half full." Understanding her diagnosis and treatment gave her a sense of empowerment.

She also praised her medical providers for treating her like family, saying their care made the treatment process easier to endure.

Rosati's Virtua breast surgeon, Dr. Lori Timmerman, held her hand and distracted her by asking about recipes while she had an uncomfortable procedure to drain blood that had accumulated at the surgical site.

"It was just what I needed," Rosati said.

September marks gynecologic cancer awareness month. Rosati wants her story to serve as a reminder that women past menopause shouldn't assume they no longer have to worry about gynecologic care.

"Know your body and get anything abnormal checked out," Rosati said. "I went back three times and I am glad I did. I don't know what would have happened if it wasn't detected when it was."

Cancer of the vulva usually develops as a lump or sore that causes pain and itching. The skin may also change color or harden.

Surgery is the main treatment for vulvar cancer, but it works best when the cancer is detected early and the whole vulva doesn't have to be removed, Deger said.

"Vulvar cancer used to always be treated with a wide removal of the vulva and lymph nodes, regardless of the stage of cancer, but this aggressive approach can be disfiguring and is associated with increased morbidity," Deger said. "Now, instead the diseased tissue is selectively excised."

When the cancer is near the anus, urethra or clitoris, chemotherapy and radiation are often first used to preserve sexual and urinary function, he said. In advanced stages, more extensive surgery may be needed as well as chemotherapy or radiation.

About 6,120 vulvar cancers will be diagnosed in the U.S. this year and 1,350 women will die from them, according to the American Cancer Society. Deger emphasized the importance of being evaluated by a gynecologic oncologist if women suspect they have a gynecologic malignancy.

"The best opportunity for women to survive is predicated on the gynecologic oncologist doing the initial surgery," he said.

Screenings can catch cancer in its earlier stages. Doctors recommend regular Pap and human papillomavirus tests. Anyone under 45 should consider getting the HPV vaccine.

It also is important to stay current on mammograms and colonoscopies because the likelihood of being diagnosed with a gynecologic cancer increases after having colon or breast cancer and vice versa.

The U.S. Preventative Services Task Force recently updated its recommendations for genetic testing of the BRCA1 and BRCA2 gene mutations to include women who have been diagnosed with breast, ovarian, or tubal cancer, and those who have completed treatment and are considered "cancer free." Also included are women of ancestries associated with the BRCA 1 and BRCA 2 mutations.