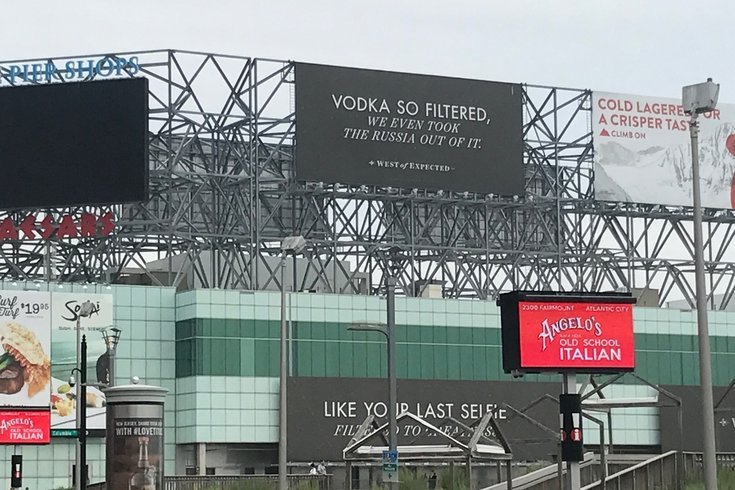 This billboard from Skyy Vodka greeted patrons on the Atlantic City boardwalk on Monday, July 17, 2017.

UPDATE: Thursday, July 20: A spokesperson for Skyy Vodka reached out to PhillyVoice to clarify that the billboard in Atlantic City is not directed at Trump. "That billboard is three years old and was meant to highlight SKYY’s American heritage," said Dave Karraker of Campari America, a public relations company that represents Skyy.  "SKYY was the first mass produced vodka made in the United States.  It was not designed as a commentary on the political environment in America at this time."

Amid the ongoing investigation into whether Donald Trump's 2016 presidential campaign colluded with the Russian government, one vodka company seems to be taking a not-so-subtle dig at the commander-in-chief.

A billboard for Skyy Vodka in Atlantic City, spotted by PhillyVoice photographer Thom Carroll on Monday afternoon, greets patrons of the boardwalk, just a stone's throw away from the shuttered Trump Plaza Hotel and Casino.

The ad reads: "Vodka so filtered, we even took the Russia out of it." It is in part a reference to the U.S. vodka distiller's process of triple filtering its spirits. The billboard appears to be part of the company's "West of Expected" advertising campaign. The public relations company representing Skyy didn't immediately respond to a request for comment about the ad.

Companies and brands taking shots at the president without actually mentioning him by name has become a trendy thing to do, especially in the wake of Trump's more controversial statements and apparent gaffes.

In fact, Skyy isn't even the first vodka company to do so. In June, Smirnoff started running an ad with the tagline: "Made in America. But we'd be happy to talk about our ties to Russia under oath."

Another recent example is Reebok. The fitness apparel company responded to Trump telling Brigitte Macron, wife of French President Emmanuel Macron, that she was in "such good shape" and "beautiful" with a flowchart showing how it's not OK to say that to a woman.

In case you were wondering when it IS appropriate to say, "You're in such good shape...beautiful,"... THIS: pic.twitter.com/Z1cnnRD8Ut

The White House and Trump have faced growing scrutiny about the campaign's ties to Russia, particularly after a New York Times report that revealed Donald Trump Jr. agreed to meet with a Russian lawyer who claimed to have damaging information from the Kremlin about Democratic presidential nominee Hillary Clinton.

Trump Plaza closed in 2014, and it's not the only former Trump property to get caught in the turmoil of Atlantic City's changing entertainment economy. The Trump Taj Mahal has been closed since October 2016 when new owner Carl Icahn shut it down because of a months-long workers' strike. Trump had lost control of the Taj in 2009 after bankruptcy restructuring but his name had remained on the building.

Hard Rock bought the casino this year, and plans to thoroughly renovate it and reopen in summer 2018.