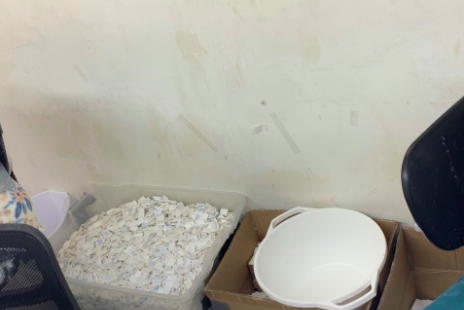 Eleven people were arrested Tuesday night in connection with the alleged discovery of a heroin packaging operation in Warminster Township, according to authorities involved in a multi-agency investigation.

State, county and local officials worked with federal agents to execute a search warrant at a residence located at 669 Cheryl Drive, where investigators said they were led by an anonymous tip.

Inside, police found a room containing loose heroin and the deadly synthetic opioid fentanyl. Both drugs were also found packed in smaller quantities into thousands of baggies.

Officials said several cutting agents used to dilute the drugs were discovered along with equipment used in the packaging process. There were 10 packaging work stations at the residence, prosecutors said.

Officials estimate the drug operation processed hundreds of thousands of doses of heroin and fentanyl worth an estimated $8 million every week.

More than 132 pounds of the drug were found in various locations. Bundles of cash totaling about $32,000 were found wrapped in rubber bands with detailed records of the amount of each of the drugs in the home. Police said a loaded silver Taurus handgun was also recovered.

Authorities believe the operation was led by Darieal Vasquez, 38, and Moises Rodriguez, 43, who were both arraigned and are now being held at the Bucks County Correctional Facility.

Nine other people were charged and placed in jail after failing to post ten percent of bail set at $5 million.

The arrests come as Pennsylvania continues to search for answers to the state's opioid crisis. The state plans to give out free supplies of the overdose antidote naloxone at 80 locations on Thursday. Philanthropist and former New York City mayor Michael Bloomberg also pledged to donate $10 million to Pennsylvania to fight the  deadly epidemic.