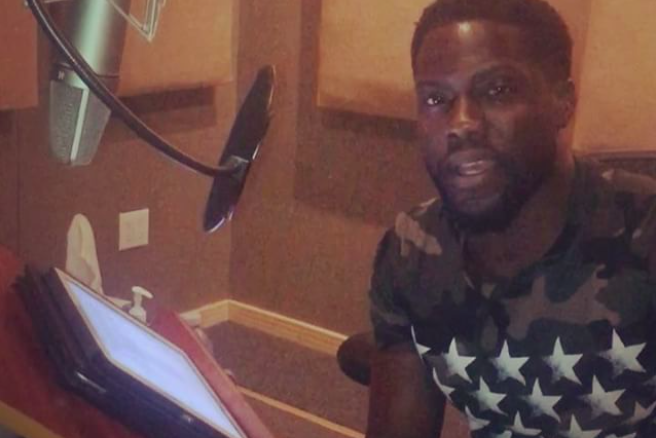 Kevin Hart records for the audio book version of "I Can't Make This Up: Life Lessons."

Kevin Hart will make you laugh, make you run, sell you underwear, occupy a day in the lives of Philadelphia residents — and now that he's about to be an author, he also has some wisdom to dispense.

The Philadelphia native and last year's highest-earning comedian took to Instagram Monday night to share a sneak peek from "I Can't Make This Up: Life Lessons," due out June 6 via Simon and Schuster's Atria Books imprint.

It's a pretty positive take on resisting the impulse to gripe. Most of the time, this argument takes the form of "there's always someone out there who has it worse," which is really, the more you think about it, a passive way to look at life challenges. It also reinforces the same comparative mentality that does a lot to overwhelm and make people unhappy in the first place.

This isn't the first time Hart has stepped out of his role as a comic to make an appeal to better human instincts. Last summer, in the midst of nationwide protests over police shootings, Hart urged against allowing media coverage to fuel a race war. Later, when Donald Trump won the presidency, Hart appealed to our capacity for love over hate in a Facebook Live video responding to the "mind----" result of the election.

None of this should be taken to mean Hart is turning serious all of a sudden. If last month's three straight nights of impromptu shows at Philly's Punch Line comedy club are any sign, his follow-up to "What Now?" will be for the laughs, not self-help for your woes.