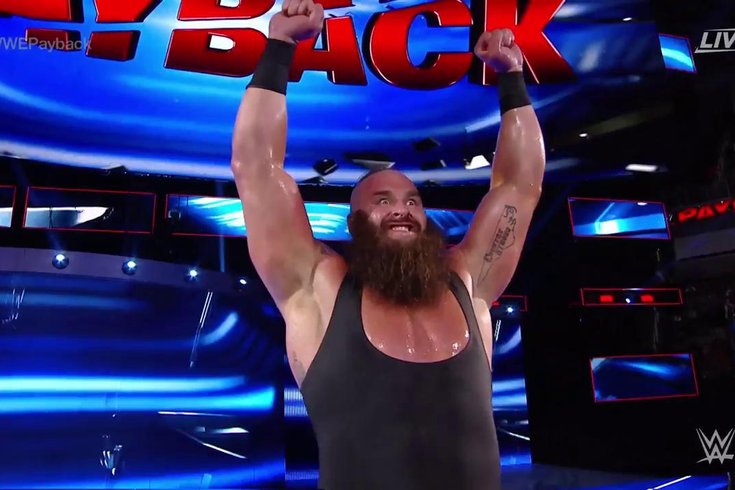 Braun Strowman is quickly gaining steam as the next big thing in WWE.

WWE’s Raw brand took over the SAP Center in San Jose Sunday night with the first pay-per-view event since WrestleMania in Orlando. If you haven’t been paying attention to WWE television as of late – especially the Raw brand – it’s safe to say you haven’t missed much. Sure, the Superstar Shake-Up was interesting and moved a handful of big names to different shows, but the Raw brand has probably had the same show for the last few months.

Oh, it’s true, it’s true, that Kurt Angle is now the Raw general manager after Mick Foley’s unceremonious dismissal. However, he hasn’t been able to save a show that’s been mired in mediocrity for much of 2017 thus far.

Sunday night was the Raw brand’s attempt to rekindle some interest, especially with placing Braun Strowman in a prominent match against Roman Reigns, again, after being the only Raw superstar that seems to be booked with any semblance of importance anymore. Would that make for a night to remember in San Jose?

Let’s get to the results.

These two teams are reeling in Raw’s tag team division. They really don’t have much to do. They could be wrestling for the tag team titles, but instead, they’ve just got bones to pick with one another.

Gallows and Anderson were setting up for the Magic Killer on Amore, but Big Cass came in with a big boot to Anderson while Amore rolled up Gallows for the pin. Yep, Amore pinned Gallows.

Gallows and Anderson are pretty much a joke right now, and that’s not fair to either of those guys. They are so much better than they’re being portrayed. They need something new and fresh right now to get back on track.

Finn Bálor gets physical with The Miz on MizTV

Bálor was a guest on Miz TV during the preshow, and he should have known he would be the target of Miz’s insults the whole time. The Miz asked Bálor how it felt to be a failure. The first-ever WWE Universal Champion didn’t exactly see himself as a failure, and made sure The Miz knew how much of a failure he wasn’t.

WWE didn’t do a great job of explaining the nature of this match. With Owens heading to SmackDown in the Superstar Shake-Up and Jericho still on Raw, they tried explaining that if Jericho won the title, he’d go to SmackDown. With Owens already on SmackDown, it could have been assumed he wasn’t going anywhere, even if he lost the title.

But, nobody really cared about the explanation because nobody expected Jericho to win the match. WWE swerved us and had him tap out Owens to the Walls of Jericho to become the new United States Champion. Pretty unpredictable, and it made fans wonder what the future held not just for Jericho, but for Owens as well.

Owens isn’t going back to Raw. And Jericho may be going to SmackDown, but he won’t be there long. He’s currently scheduled to leave WWE soon to tour with his band Fozzy, so Jericho would very well wind up losing the U.S. Title at the next pay-per-view later this month, or even Tuesday night on SmackDown. Still, it was a shocking ending that had many people talking, and that’s probably exactly what WWE wanted.

Neville’s run as WWE Cruiserweight Champion has been glossed over by many. I think he’s been an excellent character since his heel turn, and he’s had a bunch of great matches since. I just didn’t think he’d defeat Aries again on Sunday night.

And he didn’t. But he made sure to let everyone know how smart he is. While Aries locked him in his Last Chancery submission hold, Neville looked like he was going to tap out. Instead, he grabbed the referee a few times and then pulled him down. The referee wasn’t a fan of Neville’s shenanigans and promptly called for the bell, giving Aries the disqualification win.

While Aries certainly didn’t want this result, he’s probably in line for another rematch. And maybe he’ll eventually win the Cruiserweight Championship. Maybe.

Cesaro and Sheamus have really come on strong as an entertaining tag team that puts on some great matches. In fact, they deserve to be the Raw Tag Team Champions and have a great run with the titles. But once the Hardyz came back, it became hard to argue against having them as the face of the tag team division, especially right now.

The match was excellent with both teams hitting each other with everything they had. Entertaining spot after entertaining spot eventually ended with Jeff hitting a Swanton on Sheamus to retain the titles for him and his brother. Another loss for Cesaro and Sheamus, and at that point I wasn’t so sure the team would last for much longer.

But there was a reason Cesaro and Sheamus didn’t win the titles on Sunday night. After the match, they shook hands with the Hardyz and held their arms high before they left the ring in defeat. When both Hardyz were celebrating in the ring, Cesaro and Sheamus attacked them and left them laying, turning full heel and sending a message to the champions that they’re not going away anytime soon.

While I’ve enjoyed the team of Cesaro and Sheamus, I think this heel turn will be great for them. Any time someone turns heel, it usually means a pretty big push. And these two deserve it.

Since Bayley’s hometown is San Jose, some thought that was an omen that she would lose the Raw Women’s Championship on Sunday night. Going against what may be the best wrestler, male or female, since the brand extension last July, in Bliss, I thought for sure Sasha Banks would play a role in the ending of the match, possibly costing Bayley her title.

But Banks was nowhere to be found. Instead, Bliss and Bayley had an excellent match with great psychology throughout. Bliss gave Bayley some heavy hits to the head, which ultimately foreshadowed the ending of the match.

Bliss hit a DDT on Bayley after kicking out of a small package attempt, pinning the hometown hero and becoming the first-ever woman to hold both the Raw and SmackDown Women’s Championships.

While I’m somewhat surprised there was no Banks during the match, it didn’t need her. Bliss is a bona fide star and this proves it. She doesn’t need help to win titles.

Joe has been a killer since debuting on the main roster, so there was no way to think he wouldn’t come out of this match with a win, or at least looking strong. I’d say WWE did a good job in giving Rollins another win after his huge defeat over Triple H at WrestleMania while still making Joe look like a star.

While I’m usually tired of the ending they went with, I think it works here. Joe locked in the Coquina Clutch on Rollins, but Rollins used his weight to his advantage and was able to flip himself on Joe and keep him down for the three count. Nobody will ever do it as clean and crisp as Bret Hart used to do, but that might be asking a bit too much. I’m looking forward to another match between these two down the road.

The first half of this match was pre-taped at some house made to look like one of those houses in scary movies that make you just laugh. And it did. Oh boy, it did. Orton and Wyatt fought all around the house, which sported a very dark atmosphere and a room full of toy babies hanging from the ceiling. And you think this is preposterous.

Wyatt eventually got the upper hand and headed into the limo that Orton took to arrive at the house. He told the driver to take him back to the arena. After the Joe/Rollins match, Wyatt came out to the ring, but he was joined quickly by Orton, who nailed him with a chair. The two went back and forth for a while before the Singh Brothers attacked Orton, and then Jinder Mahal, the No. 1 contender to Orton’s WWE Title on SmackDown, appeared and knocked Orton out with the title belt that he stole on Tuesday night.

Reigns entered the match with his shoulder, chest and ribs taped up, selling the Strowman attack from a few weeks ago. And I didn’t really think that would come into play much in this match, simply because we’ve been so conditioned to have the babyface in peril come back and defeat the dastardly heel. But that wasn’t in the cards on Sunday night.

Reigns got some good offense in, but Strowman was just too much for him to overcome. Reigns sold his injuries like a champion, so we’ll likely eventually see him defeat Strowman in the future when he’s fully “healthy.”

Strowman pinned Reigns after hitting him with a running [sort of] powerslam. After the match, Strowman continued the attack and leveled Reigns right in the ribs with the steel steps. Talk about building a star – WWE has struck gold with Strowman right now. He seems to ultimately be fodder for Reigns down the road, but I love how they’ve built him the last couple of months.

I wasn’t expecting much from this pay-per-view going on, mainly because the episodes of Raw leading up to this haven’t really given us much to look forward to. With the exception of the House of Horrors match – which I didn’t even think was as bad as it could have been, which is a positive – this card was very good. Each match was at the very least good, and we saw history in Bliss picking up the Raw Women’s Championship, a heel turn from Cesaro and Sheamus, and an unpredictable finish in Jericho/Owens.

Sometimes unpredictability is good, regardless if you’re confused because Jericho’s supposed to take off soon with Fozzy. SmackDown’s Backlash pay-per-view in three weeks has a lot to live up to. But with their roster, I’m expecting them to.