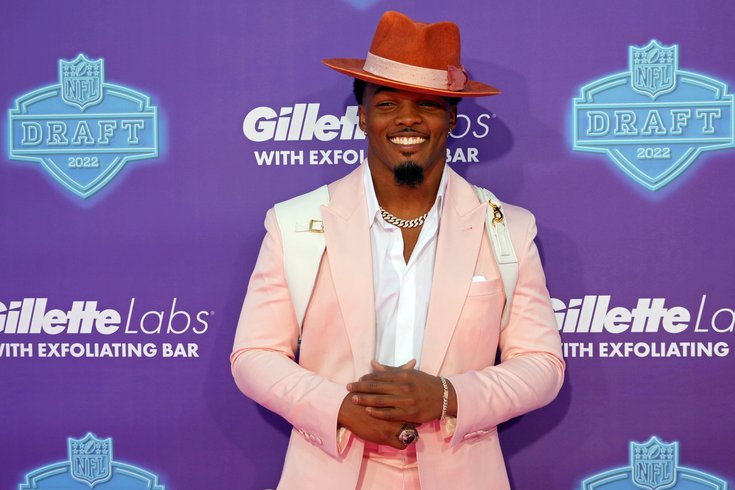 Listed at 6'4" and 241 lbs., Calcaterra is a pass-catching tight end who recorded 465 yards and four touchdowns with the Mustangs in 2021.

He spent his first three years at Oklahoma but retired ahead of the 2020 season due to concussion issues. He was preparing to become a firefighter, but transferred to SMU to give football one last shot.

Now he's on his way to Philly.

Barring any late moves, the Eagles' 2022 draft is a wrap.

Here is their final haul:

Then, of course, there's the huge trade for A.J. Brown, which sent the 18th and 101st overall picks to Tennessee in order to bring the star receiver to Philadelphia.

UPDATE [3:45 p.m.] — The Eagles moved again. This time trading up to pick No. 181 to take Kansas linebacker Kyron Johnson. The Eagles sent picks 188 and 237 to the Detroit Lions in return.

Though there is considerable distance between the two, the Eagles have now used back-to-back picks on linebackers after taking Georgia's Nakobe Dean in Friday night's third round (83rd overall).

In the first round of the 2022 NFL Draft, Howie Roseman and the Philadelphia Eagles made a pair of bold moves, initially trading up for Georgia DT Jordan Davis, and then trading for star wide receiver A.J. Brown.

On Day 2 and beyond, the Birds added Nebraska C Cam Jurgens and Georgia LB Nakobe Dean. They now only have two picks left, unless they're able to deal guys like Andre Dillard, Gardner Minshew, or Jalen Reagor for more picks.

It's a huge draft for Howie Roseman and the Eagles, who still have plenty of roster holes to fill, even after unexpectedly making the playoffs in 2021. Can the Eagles continue to find young talent that will serve as the core of a contending team going forward?

Here's a place for you to discuss the NFL Draft as it unravels. If you haven't already bookmarked our 2022 Eagles draft board, it's not too late, as we'll be updating that throughout the entire draft.