The Capital One Arena pushed most Chinese Americans out of their community. Activists here fear history could be repeated 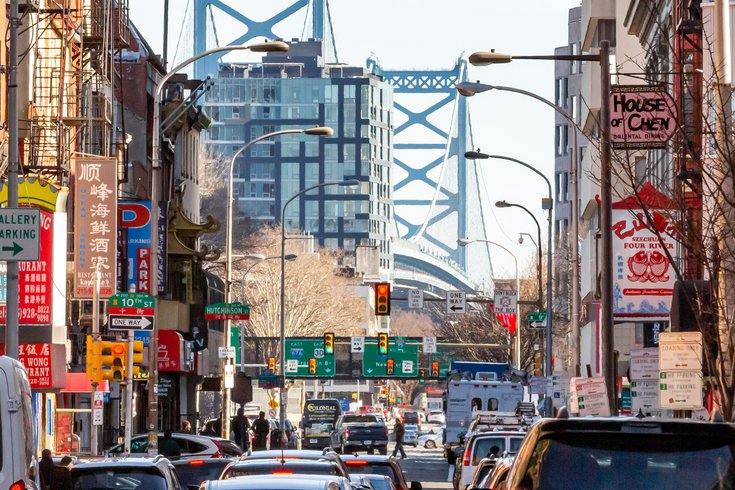 Traffic along Race Street in Chinatown, above, is already high, but residents worry it will only increase with the proposed Sixers arena.

Earlier this week, 41 community groups in Chinatown banded together to fight the proposed Sixers stadium on 10th and Market streets — and if you talk to almost any of them, they'll mention exactly what they don't want their neighborhood to become.

"I think D.C. is a perfect example of the type of impact that Philadelphia would see, if the sports arena were to be sited where it is proposed right now," Bethany Li, legal director for the Asian American Legal Defense and Education Fund, said on Thursday. "There are very few low-income Chinese immigrants left in Washington, D.C.'s Chinatown, and they actually have to be bused to the suburbs in order to get Chinese groceries to cook with.

"So, I mean, that's not a neighborhood."

Washington's Chinatown has quickly become the poster child for all of the worst fears of its Philly counterpart: soaring rent, shuttered Chinese businesses and displaced residents. Once a hub of community-owned restaurants and shops with a population of 3,000 Chinese Americans, the D.C. neighborhood is now home to just 300, and chains like Hilton have taken over real estate once occupied by institutions like China Doll, a family-run restaurant with five decades of history. The last full-service Chinese grocery store left in 2005.

There's only one person, or rather entity, to blame for the change, former residents say. The Capital One Arena.

The stadium is home to the Washington Capitals and Washington Wizards, a 20,000-seat complex built right in the heart of D.C.'s Chinatown — or what's left of it. It opened in 1997 amid outcries from Chinatown residents, who had already weathered construction of a convention center in the '80s, and Metro expansions before that. The new arena made parking impossible, local restauranteurs say, forcing many to close their doors, and as so many neighborhood staples shuttered, residents increasingly lacked common spaces.

They also lacked homes. Skyrocketing rents priced Chinatown residents out of the neighborhood, leaving those who remained few options beyond the Wah Luck House, an affordable housing complex which narrowly avoided a sale a few years back.

Today, critics of the development are quick to joke, the most Chinese thing about the area is the Chinese lettering above the Walgreens or shuttered Hooters.

Could the same happen in Philadelphia? Here, Chinatown already lost homes for 200 families to the Pennsylvania Convention Center, while the Vine Street Expressway has divided the neighborhood in half. The proposed Sixers arena, residents fear, will bring overwhelming traffic to the area, flooding the crowded neighborhood with cars that will eat up parking. Local restaurants fear they may not be able to compete with flashy new spots located in or next to the complex.

Li, who will lend legal support to the Chinatown Coalition to Oppose the Arena in the coming months, thinks the developers of 76 Place at Market East aren't considering the "broader impact" on immigrants who have historically created their own havens out of "neglected" neighborhoods for community and safety.

"I think what is not understood about Chinatowns is that they originated as a result of trying to seek protection from anti-Asian violence," Li said. "Chinese people were driven out of lots of different areas across the United States, often given a 6 p.m. curfew, or deadline to move out or be killed. And that's why Chinatown exists, because Chinese people had to live somewhere."

Philly's Chinatown is no different. It began in 1871 with a laundromat operated by Lee Fong, an immigrant fleeing "anti-Chinese sentiment in the west," and was considered a red-light district well into the 20th century. Post-World War II immigration policies transformed it into a family-friendly community.

The creators of that community now fear displacement yet again, at a particularly difficult moment in history. Last year, NBC News reported a 339% increase in anti-Asian hate crimes across the country, a trend fueled by pandemic-related racism.

"I really do think that it's the wrong move for any developer at this moment to destroy the type of social fabric that exists in Chinatown, when it's well-documented that anti-Asian sentiment and harassment and hate crimes are increasing," Li said.

"I think it's disingenuous to say that (with) this arena being sited next to Chinatown, Chinatown will be fine."