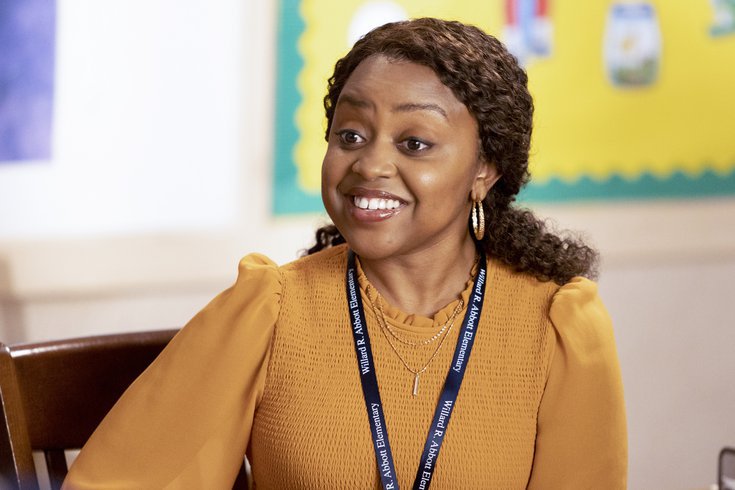 Quinta Brunson was reunited Tuesday night on 'Jimmy Kimmel Live' with Joyce Abbott, her sixth grade teacher and the namesake of 'Abbott Elementary.'

Through six episodes, Quinta Brunson's "Abbott Elementary" has given viewers a comedic glimpse into the highs and lows of being a Philadelphia public school teacher.

The actress was originally going to name the sitcom after her own elementary school, Mastery Charter Harrity Elementary in Southwest Philly, but legal reasons prevented her from doing so. Instead, the show's name comes from Brunson's sixth grade teacher, Joyce Abbott.

During an appearance Tuesday on "Jimmy Kimmel Live," Brunson said she had recently spoken with Abbott, but said she hadn't seen Abbot since she was a student.

That's when Abbott surprised her former sixth grade student by appearing on a screen behind Kimmel's desk. A stunned Brunson screamed and started to cry.

"Oh my gosh I'm so proud of you," Abbott told Brunson.

Abbott said she was honored that Brunson named the series after her, a fact she learned while watching 6ABC one night. Abbott also had nothing but good things to say about her former student.

"Quinta was an awesome student," Abbott said. "When she came into my class, she was really shy, timid. She grew out of her shell. She was really our class spokesperson. She's amazing."

Abbott will retire at the end of this school year after nearly 30 years of teaching. The late night show surprised Abbott with a free, five-day vacation to celebrate her retirement.

"Abbott Elementary" follows a group of teachers and staff at a fictional Philly public school as they educate students and navigate the challenges of working in an underfunded district. Brunson plays a bubbly second grade teacher named Janine Teagues.

The series is based loosely upon the experiences of Brunson's mother, who taught for 40 years in the School District of Philadelphia. Kindergarten teacher Barbara Howard, played by Sheryl Lee Ralph, is based upon Brunson's mom.

Despite the show being filmed in Los Angeles, Brunson said that she wanted "Abbott Elementary" to feel as Philly as possible.

"I just felt the more specific you go with the city, the better," Brunson told Kimmel. "I think the inclination is like, you know, you wanna just go maybe broader on network TV. But what I've learned from comedies is that the more specific you go, the more universal you go. So I thought if we could make the building as specifically dirty as a Philadelphia public school is and the teachers as specifically Philadelphian and the props and the references. There are references in there that are just for people from Philly that no one else is gonna get. But I feel like anyone can relate it to their own hometown."

"Abbott Elementary" is indeed full of Philly cultural references. 6ABC anchor Jim Gardner made a cameo delivering a newscast, Eagles carpets and banners are on display throughout the school and an episode showed Brunson's character teaching her students how to use Philly slang words in their everyday lives.

The sitcom debuted in December to widespread critical and audience acclaim. The series became ABC's first comedy to quadruple its initial ratings after the pilot episode aired.

City Council passed a resolution last week celebrating the West Philly native Brunson for creating "Abbott Elementary." The resolution applauded the show for embodying "Philadelphia spirit" and showing "the heart and grit of our city."

New episodes of "Abbott Elementary" premiere Tuesdays at 9 p.m. on ABC. All episodes are available to stream on Hulu.