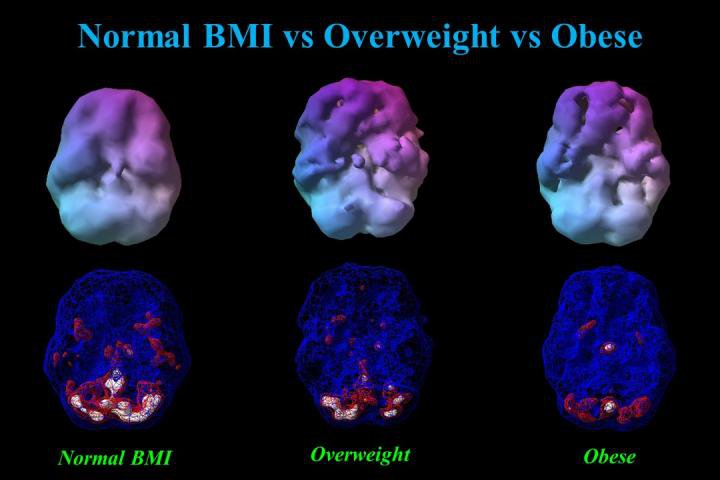 Reduced blood flow in the brain may be the missing link to understanding how obesity affects the brain, according to a new study. Above, 3D renderings of blood flow averaged across 40-year-old men with normal, overweight and obese body mass indexes.

Obesity is a known risk factor for Alzheimer's disease, but the mechanism behind the relationship is not completely understood.

A new brain imaging study – one of the largest tying obesity to brain dysfunction – has given scientists a clearer picture of that link.

The brain scans of 17,000 people showed that a higher body mass index decreases blood flow to the brain, potentially increasing a person's risk of Alzheimer's disease and mental illness. The study was published in the Journal of Alzheimer's Disease.

Low cerebral blood flow is the top brain imaging predictor for Alzheimer's disease. It also has been linked to an increased risk for depression, bipolar disorder, schizophrenia and other mental health issues.

Reduced blood flow to the brain progressively worsened in people who were overweight, obese or morbidly obese. The impacted areas of the brain included those known to be particularly vulnerable to Alzheimer's disease: the temporal and parietal lobes, hippocampus, posterior, cingulate gyrus and precuneus.

"This study shows that being overweight or obese seriously impacts brain activity and increases the risk for Alzheimer's disease as well as many other psychiatric and cognitive conditions," said lead author Dr. Daniel G. Amen, founder of Amen Clinics, a brain-centered mental health clinic.

Amen and his team analyzed over 35,000 functional brain scans using single-photon emission computerized tomography. Blood flow and brain activity were measured during a rest state and while the patients performed a concentrating task.

"One of the most important lessons we have learned through 30 years of performing functional brain imaging studies is that brains can be improved when you put them in a healing environment by adopting brain-healthy habits, such as a healthy calorie-smart diet and regular exercise," Amen said.

George Perry, editor-in-chief of the Journal of Alzheimer's Disease, emphasized in an editorial that accepting Alzheimer's disease as a lifestyle disease is important.

"Dr. Amen and collaborators provide compelling evidence that obesity alters blood supply to the brain to shrink the brain and promote Alzheimer's disease," Perry wrote. "This is a major advance because it directly demonstrates how the brain responds to our body."