The duo, whose father was a major city planner, would like to see a landmark at their original home on Locust Street 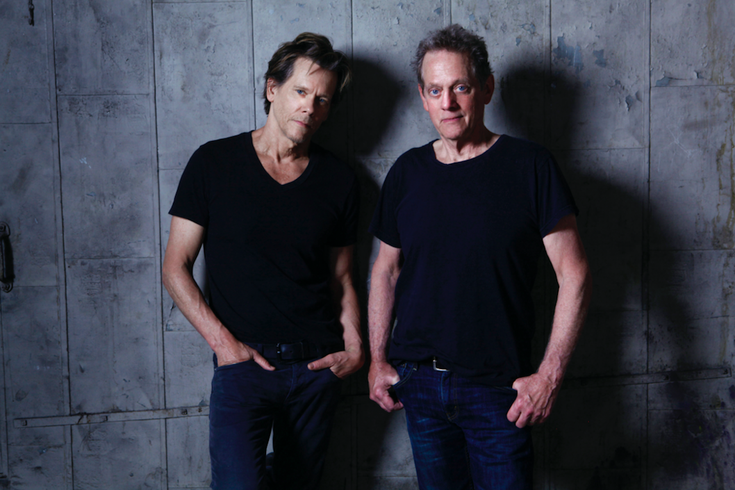 Kevin Bacon doesn’t just make movies. He and his brother Michael have been crafting music as the Bacon Brothers for years. Carpenter’s Hall, Christ Church and the John Coltrane House are among the number of National Historic Landmarks in Philadelphia.

“Can someone put a historic landmark sign in front of the house we grew up in?” Kevin Bacon said while calling from his Manhattan apartment.

“If anyone wants to do it, that would be cool.”

RELATED STORIES: Blue-collar Goo Goo Dolls have love for Philly | Howard Jones: it's just a new wave of EDM | The evolution of The Flaming Lips

2117 Locust Street is where actor-musician Kevin Bacon and his musician brother Michael Bacon came of age. Their father, the late Edmund Bacon, was an iconic city planner.

“Our father made such an impact in Philadelphia that I get more questions about him than Kevin’s acting career,” Michael Bacon said.

Ed Bacon was the architect who conceived Love Park and believed that everyone had the right to skateboard there.

“The city didn’t want kids to skateboard there, but my dad stepped in,” Kevin Bacon said. “Who would have thought that my dad would be cool with skateboarders?”

Perhaps 2117 Locust will be recognized due to Kevin Bacon’s accomplishments. Bacon has earned acclaim for his roles in such exceptional films as “Mystic River,” “JFK” and “The Woodsman.”

Consideration should also be made for Kevin Bacon’s musical work with his brother, Michael. The tandem formed the Bacon Brothers 22 years ago, but the roots of the act go back to their childhood.

“We started making music together in 1968,” Kevin Bacon said. “I had melodies in my head and Michael brought them to life on the guitar. But that was when we were kids. We brought this thing to life as adults. But we never thought that when we started this during the ‘90s that this would be more than a one-time thing.”

The band’s second-ever gig was at the Theater of Living Arts in 1996.

There was a really strange guy, who walked to the front of the stage and stared at me strangely for most of the show. He was wearing what looked like a coffee filter on his head. We made it through that show and we’re still here.”

“I’ll never forget that show since it was such a terror for me,” Bacon said. “It wasn’t just because it was a really big room for us then. There was a really strange guy, who walked to the front of the stage and stared at me strangely for most of the show. He was wearing what looked like a coffee filter on his head. We made it through that show and we’re still here.”

The Bacon Brothers have six albums in the can and are working on a new one.

“The new stuff sounds like Bacon Brothers material,” Kevin Bacon said. “Its guitar-based rock and country. It’s what my brother and I do. When we come back to the area, we’ll play some really old songs and mix it up with what we recently came up with.”

Kevin Bacon is always taken aback when he returns to his hometown.

“It’s because it’s such a metropolis, but it feels like a small town,” he said.

“I’m always so struck by that. It doesn’t feel that way here in Manhattan at all. But it’s so cozy in Philadelphia. When I return home, all those memories come flooding back.”

Even the one with the staring fan with the coffee filter on his head. “Now that’s one memory I would like to forget,” Bacon said. “Everything else, I’ll keep.”

Kevin Bacon, who often vacations in Ocean City, isn’t sure what he’ll do when he comes back, but he is certain what he won’t do.

“I won’t eat a cheesesteak,” Bacon said. “I’m not a tourist. Philly is home to me. My dad worked on such cool projects like Penn’s Landing. People love him there. He’s the reason our house on Locust Street should be a historical landmark. Forget about us. Place the landmark sign there for what he accomplished.”