2022 Broad Street Run: Where can runners park? Are spectators permitted? What is the weather forecast? 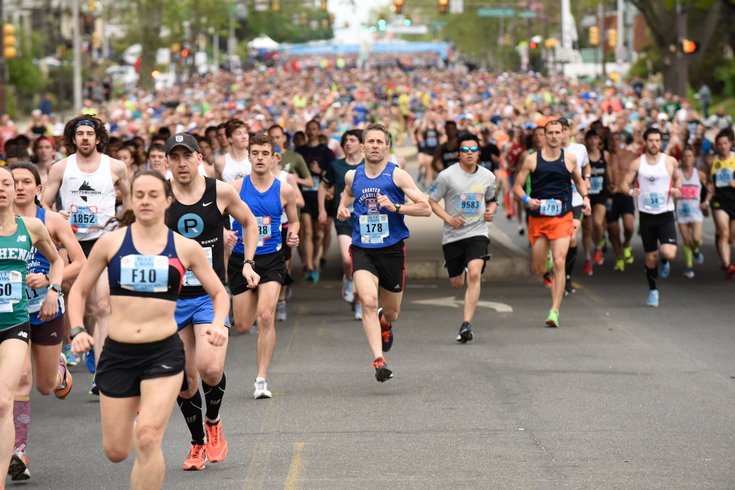 The 42nd Blue Cross Broad Street Run starts just before 8 a.m., Sunday, May 1. More than 27,000 runners are registered for 10-mile race. Spectators should not go to watch the race in person, and the first road closures along the course takes effect 2 a.m. Sunday. Above is a photo from the 2018 race.

This will be the 42nd race, and this year's run is a return to tradition after taking place virtually in 2020 and then getting postponed until the fall in 2021 and occurring with a fraction of the usual number of runners. Still, some COVID-19 precautions will remain in place.

Broad Street Run organizers say 27,500 runners are registered to participate in person Sunday and another 900 are signed up for a virtual run.

For those running in the race, planning to come watch (definitely read more about that below) or just trying to avoid the likely traffic jams created by closing a 10-mile stretch of one of Philadelphia major thoroughfare's – what you need to know is below. Race officials also recommend people text RunPHL to 888-777 to receive any alerts and notifications from the city, as well as checking broadstreetrun.com.

How do runners get their bibs?

Runners need to go the Health and Wellness Expo at the Pennsylvania Convention Center, 1101 Arch St., on Friday or Saturday to pick up race materials. Runner packets containing race bibs and other information will be distributed there. between 11 a.m. and 7 p.m. on Friday and 9 a.m. to 6 p.m. on Saturday.

All runners are required to show proof of vaccination and needed to upload an image of their vaccination cards for approval to CrowdPass by Wednesday. Everyone approved can download their certificates, which can be shown at the doors of the expo, allowing people to pick up their race packets.

Runners should also bring their IDs. If someone else is picking up your race bib and packet, that person will need your bib number, proof of vaccination, a note authorizing the pick up and his or her own photo ID.

The expo is open to everyone, no just runners. There are vendors selling health and fitness-related goods, and the official merchandise for this year's run will be there.

Don't just grab your bib and go! The Expo has fresh merch, plus giveaways and treats from our #BCBSRPartners. pic.twitter.com/Xl4cgicLx3

Where are the starting and finish lines?

The Broad Street Run starting line is at the corner of Broad Street and Fisher Avenue in North Philly, a block south Central High School's athletic fields. Racers taking the Broad Street Line to the start should get off the subway at the Olney Transportation Center station.

For 2022 the finish line is again on the west side of Pattison Avenue in South Philly, between the Eagles' NovaCare Complex and FDR Park.

Including wheelchair racers, all participants are assigned to be in one of eight starting corrals based on their projected finishing times. Runners must be in their corrals by 7:45 a.m. Sunday. Those interested in celebrating Mass before they run should arrive at the starting area a bit earlier – Our Lady of Hope Church, 5200 N. Broad Street, will hold services at 6:45 a.m.

The wheelchair racers will start their race at 7:55 a.m., followed by the elite runners at 8 a.m. After that, the remaining six corrals of runner will start every three to five minutes.

How should runners get to the race?

For those who choose to drive to the race, free parking will be available at the Stadium Complex lots east of Broad Street and Pattison Avenue. Those lots open at 5:30 a.m. and will remain open until they reach capacity. Race organizers carpooling.

After parking at the stadiums, the subway will take people to the starting line area – it's about a 35 minute ride.

People can also take the Regional Rail lines and or the Market-Frankford Line to Suburban Station. From there, get on the northbound Broad Street Line at the City Hall Station.

What is the Broad Street Run course?

This year's course is the same as in 2021. For the most part, it goes south down Broad Street, as is customary. At City Hall, runners will follow the course around the west side of the building before picking up Broad Street again.

At the end of the race, the course loops east at Hartranft Street, cutting through the parking lot of Citizens Bank Park before turning right on Citizens Bank Way and then making another right on East Pattison Avenue. This is the home stretch. Runners go west on Pattison across Broad Street to the finish line.

Can spectators watch runners along the course?

No. Spectators are discouraged from gathering along the course due to COVID-19 concerns raised by the city's health department. No spectators will be permitted to enter secured areas at the start and finish areas. Instead, race organizers recommend watch the race from home.

NBC10 will broadcast the Broad Street Run live and stream it on the station's apps from 8-10:30 a.m

Areas that in the past have been cheer zones along the course are being replaced by entertainment zones, featuring live music, and all post-race activities will be limited to registered runners.

Friends and family also can get updates about runners as they progress through the course by going to the Broad Street Run's participant tracking page and entering a person's name.

What roads will be closed? When?

Phased road closures start at 2 a.m. on Sunday, as follows

They will reopen after street sweepers clean the race course. The city says this will be complete by noon with the exception of some areas around Pattison Avenue.

The National Weather Service says Sunday will be sunny with a high temperature of 69 degrees. But at 6 a.m., when many Broad Street runners will be leaving their homes and arriving at the parking lots or even at the starting area, it will be a chilly 43 degrees.

By the time the race starts at 8 a.m., it should be almost 50, and it will be around 55 degrees by 10 a.m., when there will still be many runners on the course, and 62 degrees by the time the roads reopen at noon.

How will the virtual event work?

The virtual event was pioneered by the race's organizers in 2020. It's available again this year because proof or vaccination is required for those running in person.

Those running virtually must do so any time before May 15. That's when the results from the in-person race will be finalized. The two results will be integrated.

Results must be submitted via the Broad Street Run's website by May 15.