Centralia's beloved Graffiti Highway to be closed, covered by dirt amid coronavirus pandemic in Pennsylvania 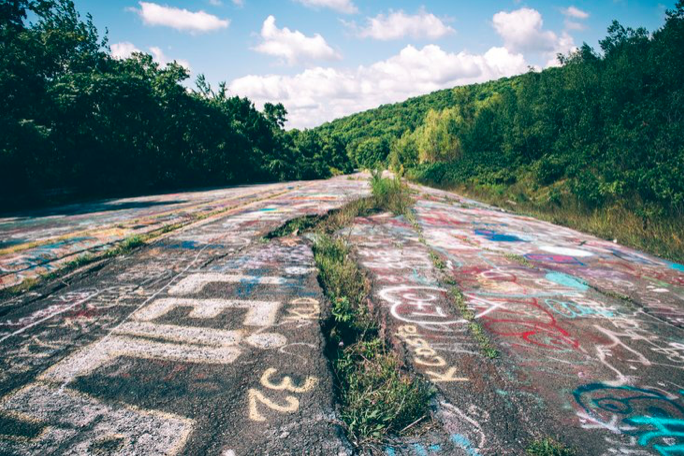 Graffiti Highway, the popular tourist destination in Pennsylvania's abandoned town of Centralia, will be closed for good by land owners Pagnotti Enterprises. The site was one of the state's most treasured oddities, a tribute to the ghost town that remained from an underground coal mine fire that ignited in 1962.

One of Pennsylvania's most unique destinations will be no more in a matter of days, as the owner of Graffiti Highway in Centralia plans to cover up the roadway during the coronavirus pandemic.

The abandoned town in Columbia County has become a source of legend in Pennsylvania. An underground fire that began in a coal mine in 1962 gradually compelled the relocation of the town's residents. From a population of 2,000 in 1950, Centralia dwindled to just five people in 2017. The fire continues to burn to this day.

During the mid-2000's, an abandoned portion of Route 61 that runs through Centralia become a pilgrimage site for graffiti artists, who decorated the 0.74-mile stretch of cracked pavement. The colorful patchwork of tags and grass jutting out of the smoky highway made Centralia a photographer's dream.

On Monday, a Centralia borough official confirmed to The Daily Item that Graffiti Highway will be covered up in dirt over the next few days.

Why? People have been flocking there despite Pennsylvania Gov. Tom Wolf's statewide stay-at-home orders to curb the spread of COVID-19.

For years, PennDOT has been discouraging people from visiting Centralia, citing safety concerns. In 2016, the department put up "No Trespassing" signs in the area, prompting fear that the state would move more aggressively to shut off public access.

A change.org petition to save Graffiti Highway garnered more than 24,000 signatures in 2017, but the highway was sold the following year to coal mining company Pitreal Corp, a subsidiary of Pagnotti Enterprises. The land owner grew increasingly tired of trespassing, complaints and vandalism on surrounding properties, including a cemetery.

Documentarian Joe Sapienza II, who released "Centralia: Pennsylvania's Lost Town" in 2017, announced this week that proceeds from all sales of his work will support Philadelphia's COVID-19 relief fund. A trailer for the documentary can be viewed below.