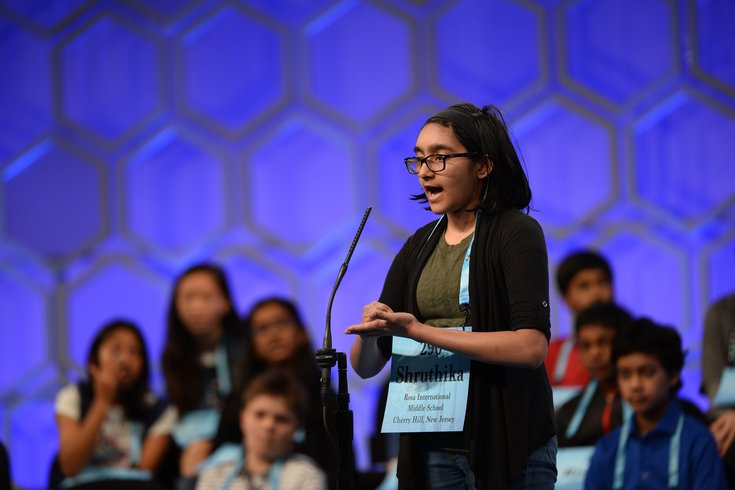 Shruthika Padhy, of Cherry Hill, New Jersey, shown here competing in the 2018 Scripps National Spelling Bee, is back in the finals of 2019 competition.

Shruthika Padhy, a 13-year-old from Cherry Hill, reached the final round of the 92nd Annual Scripps National Spelling Bee on Thursday, the third straight year Padhy has reached the competition's final round.

Padhy will compete against 15 other spellers, two of whom also hail from New Jersey, on Thursday night as the competition draws to a close. The final round will be broadcast on ESPN at 8:30 p.m.

Last year, Padhy, an eighth grader at Rosa International Middle School, finished 10th in the spelling bee. In 2017 she finished seventh, and in 2016 she finished No. 22.

Aside from Padhy, two other New Jersey teens are hoping to emerge victorious Thursday evening.

Christopher Serrao, a 13-year-old from Hunterdon County, is a seventh grade student at Readington Middle School. This is Serrao's first time in the final round; he finished tied for No. 34 last year, and tied for No. 41 in 2017.

Navneeth Murali, a 13-year-old from Edison, is a seventh grade student at Woodrow Wilson Middle School. This is the second time Murali has reached the final round, after finishing fifth overall last year.

Only two other states have at least three competitors in the final round: Texas has four spellers, and California has three of its own.

If Padhy, Serrao, or Murali win, they will become just the second New Jersey speller to win the Scripps National Spelling Bee. Kerry Close of Spring Lake won in 2006 with the word "Ursprache", a hypothetically reconstructed parent language.

Pennsylvania spellers have won seven times, most recently in 2011, when Sukanya Roy of Wilkes-Barre correctly spelled "cymotrichous", an adjective that means "having wavy hair".