After getting slapped by Will Smith at the Oscars, Chris Rock adds shows on actor's home turf

The comedian will perform at the Met on Sept. 23 and Sep. 24 as part of his 'Ego Death World Tour'; tickets go on sale Friday 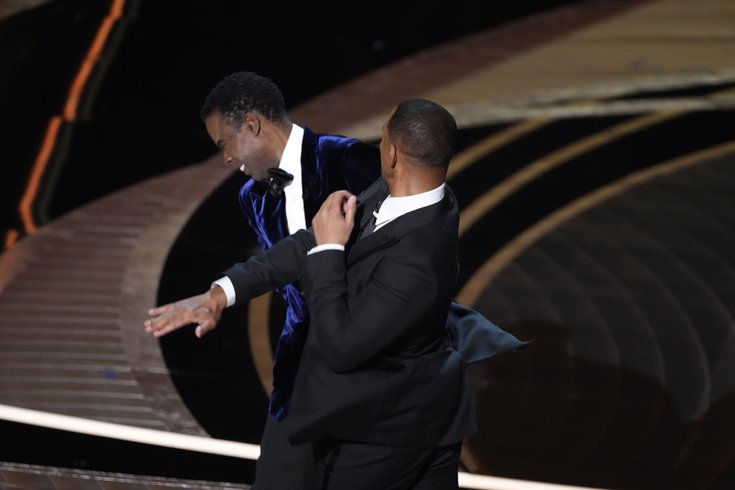 Chris Rock added a Philadelphia show to his 'Ego Death World Tour' on Wednesday. The show will be at the Met on Sept. 23. The photo above shows Rock moments after being slapped on stage by actor and West Philly-native Will Smith during the Academy Awards on Sunday, March 27.

In the "Fresh Prince of Bel-Air" theme song, a fictionalized version of Will Smith's mom sends him to Los Angeles after he gets into a fight in West Philly. Now, the person he got into a fight with in Hollywood is making the trip to Smith's hometown.

Two days after he was slapped in the face by Smith onstage at the Academy Awards, comedian Chris Rock has added two Philadelphia dates to his "Ego Death World Tour" at the Met, 858 N. Broad St. on Friday, Sept. 23 and Saturday, Sept. 24 at 8 p.m.

Tickets to the shows go on sale at 10 a.m. Friday to the general public. For those looking to buy tickets to the Philly shows when they first become available, Live Nation recommends getting to the webpage 10 minutes before the sale begins, signing in ahead of time of time and making sure your payment info is up to date.

Ticket prices for the Met shows have not been announced, yet. Tickets on the secondary market for Rock's other shows have soared in price since the Oscars incident on Sunday.

"We sold more tickets to see Chris Rock overnight than we did in the past month combined," TickHub, an online ticket marketplace, tweeted on Monday.

We sold more tickets to see Chris Rock overnight than we did in the past month combined.

The cheapest tickets on the website for Wednesday night's two shows at Boston’s Wilbur Theatre jumped from $46 before the Oscars to more than $500.

This weekend, Rock will be much closer, performing two shows Saturday night at the Borgata in Atlantic City. Both are sold out, and there are limited tickets on reseller websites. As of Wednesday evening on StubHub, the cheapest price for a ticket to the 7 p.m. show is $757 and for the 10 p.m. show it's $2,250.

Later next month, the comedian will be at Wind Creek Event Center in Bethlehem on April 20 and 21. A handful of tickets for those shows were still on sale, starting at $99.50, on Wednesday night. Tickets on the secondary market to those dates were selling for starting price of about $120.

Rock has not spoken publicly about the slap since getting off the stage Sunday, but it is known that he chose to not press charges.

Smith apologized for his conduct in a video posted to his Instagram account on Monday. "My behavior at last night’s Academy Awards was unacceptable and inexcusable," he said. "Violence in all of its forms is poisonous and destructive."

The slap was preceded by a joke Rock made about Smith's wife, Jada Pinkett Smith, and her shaved head. She has alopecia, an auto-immune disorder which causes hair loss. Rock has said he was unaware of that at the time.

The incident overshadowed Smith taking home the Best Actor award for his performance in "King Richard."

Smith's mother, Carolyn Smith, told 6ABC she was watching the Academy Awards on Sunday at her suburban Philadelphia home and she was shocked by her son's conduct.