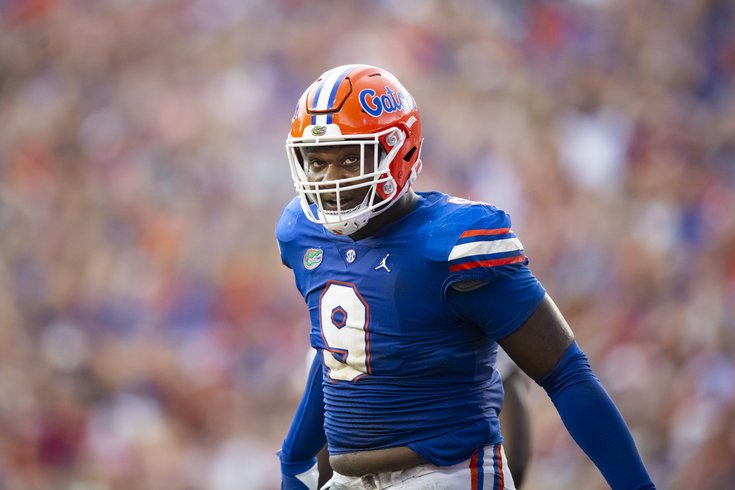 Dexter is big, strong, athletic beast of a man who has the ability to dominate one-on-one matchups in the trenches. He is a particularly good run defender who can shoot gaps with his quickness, or two-gap and hold the point of attack. The latter skill is one that NFL teams found less valuable for a while, but are now coming back to, as noted by Daniel Jeremiah.

For the last decade, personnel departments have lowered the value on old school 2 gap, run stuffing DT's. I think that's going to change in upcoming draft. So many teams playing shell coverage (light box counts) to limit explosive plays. That skill set has value once again.

Of course, the Eagles traded up for such a player in the 2022 draft in Jordan Davis. Like Davis, Dexter is a player who has not played a ton of college snaps, and a quick glance of his stats won't wow anyone. Also like Davis, it is expected that Dexter will impress at the Combine with his rare blend of size and athleticism, which he has shown in flashes, like here:

Dexter can play a bunch of positions along the defensive line, and his appeal to the Eagles would be that he and Davis would allow Jonathan Gannon (or fill in the Eagles' next DC, who would likely run a similar scheme) to play coverage on the back end, while also possessing upside as a pass rusher.

The Eagles just signed a pair of big-name veteran defensive tackles this week to help the rest of this season. Think DT might be a priority this offseason?

Sanders is having a stellar season after transferring to Arkansas from Alabama, where he didn't get much playing time in his freshman and sophomore seasons. He is a versatile, athletic off-ball linebacker / edge defender hybrid with great size who is filling up the stat sheet in 2022. In 10 games, Sanders has 86 tackles (12 for loss), 8.5 sacks, 3 forced fumbles, an 3 pass breakups. He is also a big hitter. For example:

I love the color commentary on that hit, lol.

Sanders is an intriguing player and a potentially valuable piece for any defense that seeks to be "multiple." The Eagles could have needs both at off-ball linebacker, and on the edge in 2023, so Sanders makes a lot of sense as a defender who can wear multiple hats.

Latu suffered a serious neck injury while playing at Washington, and his football career was seemingly over. He transferred to UCLA, where he is now thriving, with 8 sacks and 3 forced fumbles in 10 games. When you watch his highlights, it's easy to see that he has an extensive repertoire of pass rush moves, and he can win either on the edge or from the interior on obvious passing downs:

Latu's medicals will have to check out, but he has been a breakout defensive playmaker this season.

He consistently gets his hands on passes, and makes game-changing plays. He plays outside and inside for Utah, but because of his small frame, he'll probably be a slot corner in the NFL.

Utah Clark Phillips III just might be everyone’s favorite CB for next season and it’s not hard to see why he has many fans. He’s competitive, smooth, trusts his eyes, confidence in his game, sticky coverage, high IQ, and is super talented! pic.twitter.com/xDJxfg73bd

The Eagles have a quality starting slot corner in Avonte Maddox, but Maddox has missed time in all but one of his five NFL seasons. Phillips will likely be a Day 2 pick, so if you're the Eagles and you're considering taking him in that range, you should feel comfortable with his versatility to also play some outside.

Nix was a guy who had sort of been written off after an erratic career at Auburn, but he has had an excellent year after transferring to Oregon. He is completing 72.8 percent of his passes on 9.2 yards per attempt, and 24 TDs vs. 5 INTs, to go along with 13 rushing TDs and one receiving TD. He has adequate size, good arm strength, he can create when protection around him breaks down, and he's an athlete:

Remember when the Eagles drafted Jalen Hurts in the second round because they wanted a good backup? Well, uh, they'll need a backup if Gardner Minshew leaves for another team this offseason, and Nix is a player with some similar attributes as Hurts who wouldn't require major offensive changes if he had to step in.

To note: Nix is injured, and may or not play in this game. I'm curious to see how he fights through an injury if he's a go.