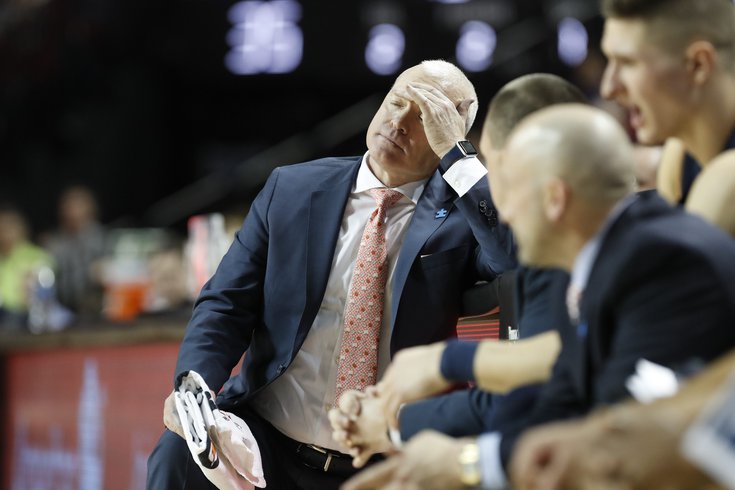 The tremors were heard throughout the plane even before the wheels bounced on the runway apron. Pat Chambers just didn’t think the timing was right Thursday night. Though, the murmurs and disgruntled aahs on the Penn State men’s basketball team plane said something. It told Chambers, the Nittany Lions head basketball coach, that his players knew.

Still, actually telling them was going to be the hardest part. All of the hard work, the commitment, the sprains and strains, the tough love and hugs, the floor burns, the sacrifices — they were about to go poof in the wind.

They boarded the team bus and drove over to the Bryce Jordan Center, where Chambers addressed his team. None of his players would look up, their eyes clinging to the Nittany Lion insignia in the middle of the room. Chambers had to tell them that their season and their dream of playing in the NCAA Tournament was over.

On Thursday, the NCAA made a monumental decision and announced the cancellation of the NCAA Tournament due to the coronavirus threat, nixing Penn State’s first chances of playing in March Madness since 2011.

“We’re devastated, 100 percent, but obviously the safety, health and well-being of our student-athletes and coaches is priority No. 1,” said Chambers, who was enjoying his best campaign in nine seasons as head coach. “But it doesn’t mean we can’t be devastated and hurt, and in shock that this season abruptly ended. You feel for the seniors, especially Lamar Stevens, Mike Watkins and Curtis Jones.

“They choose to come here to play in the NCAA Tournament and we had that opportunity. They’re never going to get that memory, and to me, that hurts the most. They’re never going to get that experience, after all of the heavy lifting that they have done for this program. Especially Lamar and Mike, they did a lot of heavy lifting to put us where we are today. It hurts. It stings. We’re all numb.

Basketball was his nutrient. It always has been, just like his Delaware County and Philadelphia basketball roots. So, when Chambers took over the Penn State men’s basketball program in 2011, he knew right where he had to start—back to Philadelphia, back to his roots.

It was supposed to lead to nights like Thursday, when the Nittany Lions (21-10) were scheduled to open Big Ten Tournament play as the No. 6 seed against No. 11 seed Indiana at Bankers Life Fieldhouse in Indianapolis. That in itself told you how the Penn State program rose under Chambers—as the higher seed to a traditional blueblood program like Indiana.

What’s more is the Nittany Lions (11-9 Big Ten) were almost assured an NCAA Tournament berth for the first time in nine years and only the third time in the last 20 years. Penn State’s 11 Big Ten victories this season was its most since 1995. Briefly this past season, the Nittany Lions were ranked No. 9 in the nation — and above every other Division I men’s basketball program in Pennsylvania.

That might not sound significant, but it’s the first time in Penn State men’s basketball program that it’s ever happened—considering Villanova, Temple, Pitt and St. Joseph’s traditionally held that lofty position.

That’s where grit and determination, and clenched folded arms will get you.

Chambers inherited a tough situation from previous coach Ed DeChellis, who suddenly left Penn State in 2011 to take over the Navy program. Chambers got the Penn State job late, and complicating his introduction to major college basketball was the loss of four seniors, including Talor Battle, Penn State’s all-time leading scorer (2,213 points) who was probably going to be surpassed by Roman Catholic grad Stevens (2,207) before the NCAA’s coronavirus decree.

Chambers started from scratch. It translated into three harsh seasons to start, when the Nittany Lions were a combined 38-59 overall and 12-42 in the Big Ten, including a pair of last-place finishes.

Still, Chambers kept fighting. When you’re the youngest of 12 children, like Chambers, you have that tendency.

“The credit goes to the players,” Chambers said. “Lamar Stevens and Mike Watkins really stuck with it. Lamar could have gone to a real blueblood, and he chose Penn State. And he could have left and he stayed, where other players would have started their professional clocks.

“Mike stayed and has his Penn State degree, which he knows how powerful that will be. Plus, we have a great staff and there is an investment now from the alumni. We sold out the Palestra against Iowa, and it was great to see all of those Penn State fans there that we have in Philly.”

What started it, Chambers said, was getting D.J. Newbill in 2012. A Strawberry Mansion graduate, Newbill transferred into Penn State from Southern Miss and went on to play three seasons for the Nittany Lions, averaging 18.3 points a game. Newbill opened the Philly hotbed for other primetime players like Shep Garner, and other Roman stars followed like Stevens, Tony Carr and Nazeer Bostick.

“That really helped us out,” Chambers said. “I won’t say getting D.J. opened the door, but it cracked it open to where guys at least were looking at Penn State. Even Lamar says today he didn’t know much about Penn State basketball before he got here.

“Then we got Shep, and it started rolling. Those relationships helped us and we stayed the course and worked extremely hard to get to this point.”

Chambers played under coaching legends Hall of Famer Herb Magee at Philadelphia University, and Dan Dougherty, at Episcopal Academy, and received a coaching tutorial under another legend, future Hall of Famer Jay Wright at Villanova where Chambers served as an assistant coach.

It paved the path for his success at Penn State.

Chambers, 49, saw this season’s success coming—as long as Stevens and Watkins returned. Penn State went 14-18 and 7-13 in the Big Ten last season, but the Nittany Lions were in games. Penn State was 1-10 in Big Ten games in 2019 decided in the last minute or overtime.

“I would say the last three seasons Penn State was a top-50 program, but no one noticed,” said Hall of Fame sportswriter Dick Jerardi, the former Philadelphia Daily News college beat writer who is in his 16th year as the color analyst for Penn State men’s basketball radio broadcasts. “It was inevitable that they were going to be good this year, because you can’t be unlucky two years in a row.

“For the first time since Pat has been here, not only does he have talent, but they’re nine deep, they’re really fast, and for the first time, Pat’s best players are seniors. That’s a combination that gets you somewhere.”

For once, Chambers thought, he and his team wouldn’t have to gather around the TV on Selection Sunday holding their collective breath waiting to see if they were in.

This time, they were.

“I’m very proud of this group and what they were able to accomplish, but we’re not done,” Chambers said. “This thing is unprecedented. In all of my years of basketball, I’ve never seen anything like this. The feeling that I have is of 9/11, that gut-wrenching, heartbroken wow, because so many lives are affected by this.

“We have to band together. We can’t live in fear—that’s for sure. That’s not who we are as Americans. That’s not the way we’re wired. We don’t live in fear. So, hopefully, we get to that conclusion in the next few weeks. But the worst thing that’s happened is social media, because I couldn’t get to them before social media hits.

“My guys already knew what happened before I got to them. Social media is a big part of this. Social media is challenging. But it doesn’t change trying to look my players in their eyes and tell them that their season is over, after they’ve worked so hard for one, two, three, four, five years, all since the summer to put us in this position.

“That was the hardest part.”

Chambers, who should have been Big Ten Coach of the Year, said his Penn State team reminded him of Villanova’s 2009 Final Four team. He was a Wildcats’ assistant coach on that team whose synergy between the players and coaches meshed so well.

Chambers himself didn’t want to hear it, but he brought Penn State basketball back to life this season.

“I’ll never forget these guys and this team,” Chambers said. “They’ll always be with me, as I’m sure every coach in the country will be connected with their teams this year. The seniors are only 22. They get one chance at this, and that’s it. At least I get to continue to coach and come back and keep trying. I’m heartbroken for them. This is one of the best teams I’ve ever had.

“My message to my guys was that I love them, and no one could take away the experiences that they made for this team. I told them to get home and be safe. I want them to get through this, and maybe in a couple of months, I’ll be able to look back and reflect on the amazing things that we did this year.”