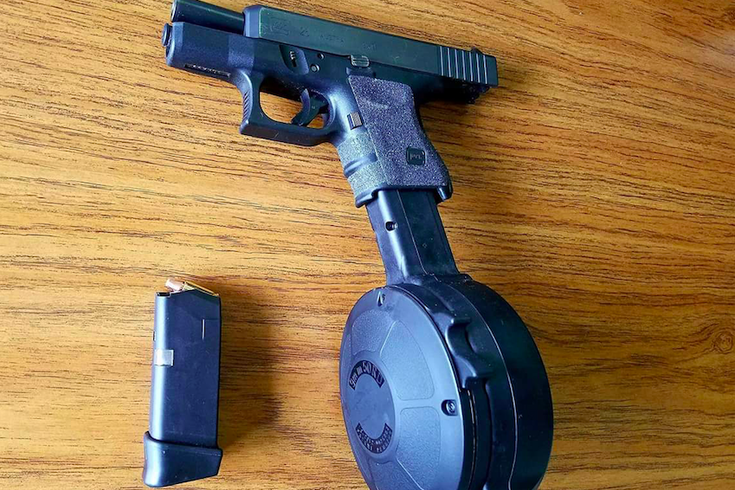 An Aston woman faces a potentially lengthy prison sentence after she allegedly straw-purchased two firearms for a boyfriend who was prohibited from owning a gun, Delaware County prosecutors announced on Wednesday.

According to investigators, 23-year-old Erika Kulp bought a 9mm Glock 26 and a Smith & Wesson Walther .380 for her boyfriend, who she knew was unable to own a firearm because he had previously been committed to a hospital for psychiatric evaluation.

On July 8, a Chester police officer who was working on an unrelated investigation recovered the 9mm Glock 26 handgun — fitted with a fully loaded 50-round drum magazine — and initiated an investigation to its ownership. In collaboration with the Bureau of Alcohol, Tobacco, Firearms and Explosives, the Delaware County Criminal Investigation Division determined the gun was owned by Kulp.

Upon further investigation, Aston police revealed that both guns had been temporarily seized by police during an April 12 domestic disturbance call. The guns were returned to Kulp 10 days later.

Detectives visited Kulp on Aug. 17 to interview her about the guns, initially receiving inconsistent statements before Kulp allegedly admitted she had not been truthful. She later told investigators that while shopping at Yeadon-based Double Action Gun, she provided false information on required ATF and Pennsylvania State forms and paid for the guns with cash from her boyfriend, prosecutors said.

In addition to the illegal purchase and transfer of the firearms, Kulp is charged with tampering with public records and criminal conspiracy. If convicted, she faces a mandatory minimum sentence of five years in prison under the Brad Fox Law of 2012.

“We know that the vast majority of the illegal guns on the streets used for violence and crime are a result of straw purchases,” said Delaware County District Attorney Jack Whelan. “If an individual engages in the illegal exchange of firearms in Delaware County, we will arrest and prosecute them and they are going to spend a substantial amount of time in prison.”