For family of basketball stars, Camden's Dajuan Wagner Jr. proving best may be yet to come

His grandfather won NCAA and NBA titles, his father is a New Jersey hoops legend, but DJ Wagner is ready to make his own name.

The family heirlooms were cultivated mostly in empty gyms, which echoed the chorus of squeaking sneakers and came in the forms of a deft shooting touch, boundless work ethic and the occasional family elbow to create some spacing.

No one ever gave the other a break.

The Wagner family duels have become tradition. So, too, has the transcendent, generational talent from Milt Wagner, to his son, Dajuan Sr., to now his grandson, Dajuan Wagner Jr., or “DJ,” the No. 1 sophomore high school basketball player in the nation.

They all went to Camden High, proudly wearing the purple and gold, and father and son have New Jersey state titles. DJ’s story is just beginning to unfold—and the next chapter could possibly take another step locally.

One thing is certain: Milt, the grandfather, and Dajuan Sr., the father, each admit that the Wagner basketball genes have gotten better and better through time, Milt admitting Dajuan Sr. was better than him, and both Milt and Dajuan Sr. openly saying that the best Wagner is about to arrive—DJ, Camden’s gifted  6-foot-3, 170-pound point guard.

“As for me, I see DJ’s jump shot and his build is like mine, so he’s like me in those areas, but as far as his dad, DJ attacks the basket with either hand like his dad used to do,” said Milt, one of the Philadelphia-area hoops legends who led Camden to the 1979 state championship. “So, DJ is more a combination of both of us, and he has his own talents as a point guard. DJ is far better than me at the same age—and I know his father will say the same thing.”

Milt, now 58 and living in the Louisville area, went on to pair with Camden teammate Billy Thompson to win Denny Crum’s Louisville the 1986 NCAA national championship, and then the 1987-88 NBA title for the Los Angeles Lakers under Pat Riley. 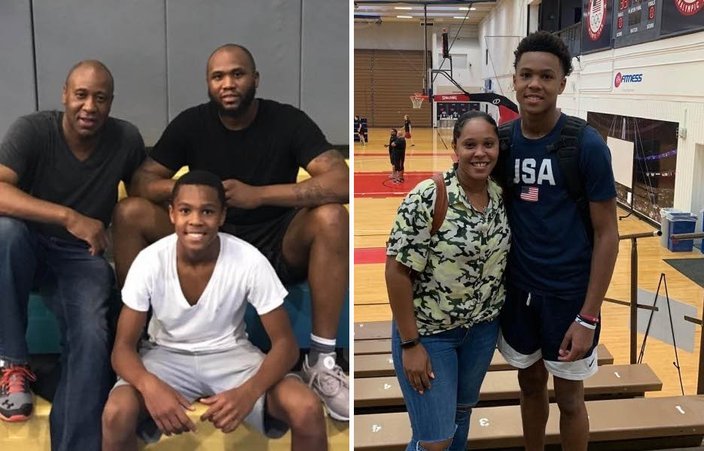 As a sophomore, DJ has already been tabbed by many to Kentucky, which is coached by John Calipari, who recruited and coached Dajuan at Memphis, where he flourished to become the No. 6 overall pick in the 2002 NBA Draft by the Cleveland Cavaliers, before ulcerative colitis cut short his career.

No schools locally have offered a scholarship, though legendary Villanova coach Jay Wright has been in contact with Brunson about DJ.

“I’m open to go anywhere,” asserted DJ, who carries a 3.8 GPA. “I love college basketball and I would be open to going anywhere. My parents are on me about my education. Academics come first. If I slack, my parents have no problem taking basketball away.

“My biggest priority is winning Camden a state championship. We haven’t won a state title since my dad played (his junior year in 2000). I don’t care about individual goals or anything. I’m proud of carrying on the Wagner legacy and the Camden legacy. I’m not anywhere without my teammates, my family, my grandfather and my mom and my dad.”

"DJ is [better than me] and I have no problem saying that... But he hasn’t beaten me yet. I’m not giving him anything. I had to earn it from my dad, and DJ will have to earn it against me." —Dajuan Wagner Sr.

Milt and Dajuan started it, and it could be a Wagner family mantra: No one gets any breaks. It goes back to Milt’s pro days, when a teenage Dajuan and Milt were together in an empty gym. They would battle one-on-one, two dribbles, best-of-five. Milt would block Dajuan’s shot, then talk some trash to test him.

“Dajuan used to get mad, throw elbows at me, you wouldn’t know we were father and son the way we used to go at it,” Milt says, laughing. “It was serious. I would throw an elbow back at him. Dajuan goes at DJ the same way I went at Dajuan. I wanted to prepare Dajuan for the real world, especially when you’re that good that young.

“You had to throw Dajuan out of the gym. DJ is the same way. They’re gym rats. They love the game. You can’t say you want to be good at something if you don’t love it. That love has been passed down, you can say, along with the family elbow (laughs).”

Dajuan Wagner may arguably be the greatest high school player in New Jersey history. The explosive 6-foot-3 guard once scored 100 points in a game. He finished his career at Camden as New Jersey’s all-time leading scorer with 3,462 points, a record that still stands.

What’s scary is that DJ is better.

“DJ is [better than me] and I have no problem saying that,” says Dajuan, now 38. “Me and Syreeta want to make sure he’s having fun. That’s the biggest priority. DJ will be better than both me and my dad, and if he isn’t, we haven’t done our jobs. My dad made sure I was better than him, and I’m making sure DJ is better thn me.

“But he hasn’t beaten me yet. I’m not giving him anything. I had to earn it from my dad, and DJ will have to earn it against me. I remember when I beat my dad my sophomore year of high school. I remember I punished him for all of those years he beat me and blocked my shot (laughs). We hugged after that—because I knew my dad was proud of me, like I’ll hug DJ the day he beats me.”

What will loom over the next few years is where DJ will attend college. But what gets lost is that he already made a serious choice where he currently attends school. DJ received offers from every major prep school locally and nationally, but decided to stay home and play for Camden.

"Everything DJ does and everything he says comes from his heart... He’s a great basketball player, but a better person." —Coach Rick Brunson

“DJ is all about winning — and you don’t get that with stars that age. DJ is a kid who would come from my era,” Brunson said. “Today, with talented kids like DJ, it’s about your brand and how many social media followers you have, and how many individual awards you get. That’s not DJ.

“Everything DJ does and everything he says comes from his heart. He’s genuine—and that’s a credit to his mother and father for instilling that into him. He’s a great basketball player, but a better person. That’s also a credit to his parents. DJ is about his teammates first, and sometimes I have to get on him about being an alpha dog.

“DJ is a special kid to coach. I’m a hard guy to play for, and DJ wants to be great. I don’t like making comparisons, but he has a lot of (Portland guard) CJ McCollum in him. He can play the point, he can shoot, and people don’t realize his athleticism.

“And I want to say this—DJ has his own path. As for the local schools recruiting him, what the great John Chaney always said to me, ‘You can’t lose by default, you have to show up.’ You never know. DJ can play anywhere. But I can’t stress this enough, DJ is setting his own path. DJ has the whole city of Camden following him and I can see him possibly staying local.”

“DJ has to do what’s best for him,” said Syreeta, a frontline nurse. “I want him to work towards his dream, but his education is a priority. I’m happy he stayed in Camden to play, and that’s because he wanted to stay home and be there with his teammates and family.

“DJ’s first sport was football. When he started playing basketball, Dajuan and I backed his decision, too. Our biggest concern is that he’s having fun and he’s enjoying himself. We want him to be a kid and do things kids do. I still have to get on him about getting out of the gym. DJ is open to go anywhere.

“But that’s down the line. We want him to experience being a sophomore in high school.”