The smash-hit play, co-written by Ardmore native Benj Pasek, comes to the city for the first time Aug. 16 through Aug. 28 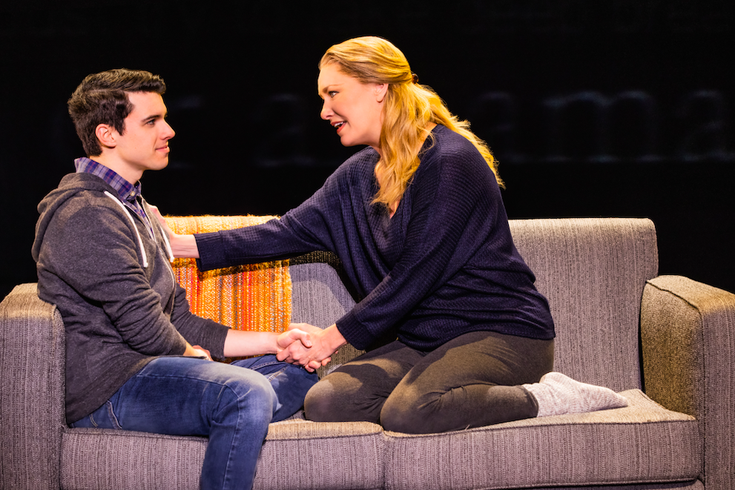 Two-years after its arrival was postponed due to the COVID-19 pandemic, the critically-acclaimed, smash-hit play "Dear Evan Hansen" is making its way to Philadelphia for the first time as part of its North American tour.

The musical, which debuted in 2016, follows a lonely teen, Evan Hansen, who, based on a twist of fate and a letter that was never meant to be read, finally has a chance to fit in, as long as he's willing to live a lie. It has won six Tony Awards, and the original Broadway cast recording won the 2018 Grammy Award for Best Musical Theater Album. The show was made into a film in 2021.

In Philadelphia, in will be onstage Tuesday, Aug. 16, through Sunday, Aug. 28, at the Forrest Theatre, as part of The Shubert Organization and Kimmel Cultural Campus' Broadway Series.

Pasek is an Ardmore native, and wrote the play based on his own experiences attending Friends' Central School in Lower Merion.

We’re less than a week away from @DearEvanHansen’s arrival in Philly!

Got your tickets for the August 16 - 28 stop on the Kimmel Cultural Campus? If not, we’ve made it easy for you ➡️ https://t.co/B1KJxTzEZ6 pic.twitter.com/E42SN6KWug

Onstage mother-son duo Coleen Sexton and Anthony Norman met with PhillyVoice via Zoom on Wednesday to discuss their excitement for their upcoming trip to Philadelphia, what the play means to them and their favorite parts of the show.

Norman plays the titular role of Evan Hansen. He is a multi-instrumentalist from Chicago and has been featured in TV shows, including HBO's "Mare of Easttown," which was filmed in the region, as well as "Chicago Med" and Broadway's "The Prom."

Sexton, from New Jersey, plays Evan's mother, Heidi. She first appeared on Broadway in "Jekyll and Hyde," and has been part of national tours of "Legally Blonde," "Wicked" and "Chicago."

PhillyVoice: So, are you both in Philly now?

Coleen Sexton: No. Well, we can't wait to get there! We're actually in Ottawa, Canada at the moment.

I've never been to Canada! That's really cool. When do you make your way over here?

Anthony Norman: August 15 we'll travel there, and then we'll be there two weeks.

Have either of you been here, to Philly? I know, Anthony, you've been in "Mare of Easttown."

AN: Yeah, we shot somewhere out in the country. That's where a soundstage was. And sometimes we shot on location. Very much in, kind of, the middle of nowhere most times, at least when I was on set, but I mostly shot on the soundstage. But, I really grew to love Philly, and it's kind of become a second home. I just love the city so much.

Yeah, "Mare of Easttown" is an awesome show! What has it been like overall, just getting into these characters for "Dear Evan Hansen" and even forming this familial relationship between your two characters?

AN: It's been a treat, to say the least. I'm shocked at how much I relate to Evan, and just how correct everything feels. Because, when I first auditioned for this, I didn't feel like I was right for the show, whatsoever. And fortunately, the the team knows what they're doing, and they were like, 'No, you're wrong.' And working with Coleen has been a dream, because she is such a generous actor onstage – and offstage. She's a wonderful person. She's a lot of fun. It's great to be onstage with someone and share an intimate relationship on and off stage, and to just know, they'll be there for you whatever, whenever, and they got your back. It's the best job in the world.

CS: I definitely agree with you 100% on that, and I feel the same way about you, "sonny." It's been a blessing to be a part of the show, to be able to tell a story that relates and resonates with so many people, parents, kids, people that don't fit in. I truly believe that there's a character onstage for everyone that's in the audience – that (everyone) can relate to someone that's onstage. The music is so amazing to be a part of: Benj Pasek and Justin Paul, who also wrote "La La Land" and "The Greatest Showman." It's just amazing, amazing songs to sing, and it's just been a blessing to be a part of it.

You mentioned Benj Pasek. He went to school in Ardmore, right outside of Philly. It must be awesome to be able to bring that show here, and to show what his experiences were like near this city.

CS: Yeah, and I have to say that I'm excited to come to Philly because I'm from New Jersey, so I'm close to Philly. But I also lived in Phoenixville during the pandemic, so I kind of know a little bit about that area, and I'm just really, really looking forward to getting there and having a cheesesteak!

That's funny! I'm from New Jersey, too! You touched on it a little bit, but what are some of the messages you hope that people will take when they come see the show in Philly, or wherever they see it?

CS: I'll say quickly there is a message, one of my favorite messages in the show – at the end of Act 1 is a song called ..."You Will Be Found." The message in the song, what all the characters are saying, is you are not alone. And I think that is probably the staple message throughout the entire show is we aren't alone. We have outlets to talk to. We need to communicate with our kids and know what's happening in their lives and have the conversations.

AN: Yeah, I agree with that, just to start the conversation around mental health and if someone wasn't comfortable or confident enough to tell either their parent, a friend, a spouse, a girlfriend, boyfriend, whatever, that 'Hey, I see myself up there. I didn't know someone else felt like that.' And I actually do struggle with that sort of thing, just to get a conversation going. I mean, that makes it the best job in the world. I also just hope that people laugh a lot, because, despite everything, despite the drama of the show, which there's a ton of, there's also a ton of comedy. It's just Steven Levenson, the book writer. Man, that guy knows how to write a show. He really knows what he's doing.

CS: I actually find myself, so many times, in regular everyday conversation with friends or family, actually saying lines from the show. They come out so naturally. That shows you a show is so well written, you know?

Definitely! I haven't seen the show on stage yet, so I'm so excited for it to come to Philly. Do you have any favorite scenes or songs that you love performing each time you're up there?

AN: I love performing "For Forever." It's one of my favorite songs in the show. It's a tie between that and "If I Could Tell Her," but I really love "For Forever" because it takes the show and ramps it up to what is coming. It's a total turning point in the show, so it's very exciting. And I mean, it's just a gorgeous song, and I'm very lucky to get to sing it.

CS: Yeah, and you do it so well! It's such a beautiful, beautiful number, really.

CS: You stop. My favorite, by far ... I mean, I love all the songs, my gosh, it's hard not to. But, I have to say "Good For You" in Act 2 is kind of like a rock song that Heidi gets to sing, and you know, since I'm from Jersey, it's the closest thing this Jersey Girl's ever going to get to being a rock star. There's the way the lights are, and I get to strut downstage. And it's just really, definitely one of my favorite parts of the show.

AN: It's worth the price of admission alone, that strut she does downstage.

I know you're both super established in your careers, so I was wondering, what advice would you give someone who really looks up to you and hopes to be where you are one day?

CS: I would say, just from personal experience, be humble. Study; always, always, always hone your skills. I'm not going to give away my age, but I'm a little older. And I still do my voice lessons once a month. Be giving and be humble, I think is a very important message that I would give to young kids.

AN: I'm just curious who told you I was established in my career? That's an insane thing. That's false! Ha. Be curious, and ask questions and find people who inspire you. Latch on to them. And, be persistent. Be very persistent. The worst someone could say is no, and usually they won't. From what I've learned – and I'm still very early in my career – but just find people who inspire you and be persistent, and practice, practice.

Is there anything else you want to mention?

AN: We have mental health partners that we work with. The Child Mind Institute transforms the lives of children who have learning disabilities and struggle with mental health, as well. So, the Child Mind Institute, The Trevor Project, which works with LGBTQ youth, and also the Crisis Text Line, you text 741741 and you'll be linked with a licensed counselor, free of charge. Just if anyone's ever going through a hard time.

CS: And we cannot wait to come to Philly!