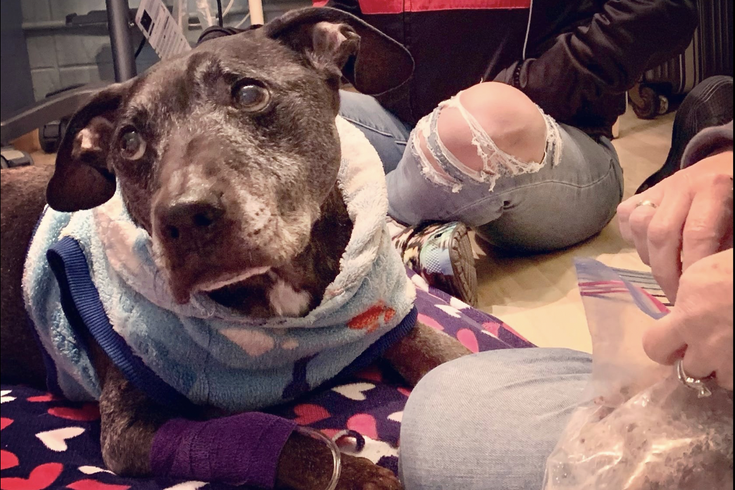 A new study found that dogs have more in common with people than wolves when it comes to facial expressions. Frodo is one of the pups rescued from a dogfighting ring operated by Michael Vick.

Every dog owner knows how hard it can be to say no to "puppy-dog eyes," but a new study shines light on how canine facial expressions evolved and why humans are able to understand them so well.

Researchers found that when it comes to certain muscle groups in the face, dogs are much more similar to humans than they are to wolves. Dogs and wolves are closely related, but scientists believe the two species diverged roughly 35,000 years ago.

Over the thousands of years which dogs evolved from wolves due to their close contact with humans, the domestication process included selection for rapid and intense facial movements that are similar to what's seen in people.

The researchers believe that this allowed the two species to communicate more effectively.

Anne Burrows, a Duquesne University professor who contributed to the study, shared preliminary findings on Tuesday afternoon at the 2022 Experimental Biology conference in the Pennsylvania Convention Center.

“Throughout the domestication process, humans may have bred dogs selectively based on facial expressions that were similar to their own," she told SciTechDaily. "Over time dog muscles could have evolved to become ‘faster,’ further benefiting communication between dogs and humans.”

The study focused on mimetic muscles, a tiny group of fibers that control facial expressions. There are two types of these muscle fibers, fast twitch and slow twitch.

Human faces are dominated by the fast twitch version, which allows us to form facial expressions quickly. It also means expressions are hard to hold for a long time, since fast twitch fibers fatigue easily.

Investigators found that dogs have a much higher percentage of fast twitch fibers in their facial muscles compared to wolves. Wolves only had around 25% on average, while dogs had between 66% to 95%.

“These differences suggest that having faster muscle fibers contributes to a dog’s ability to communicate effectively with people,” Burrows said.

This hypothesis would explain why dogs have such expressive faces and why they're able to understand human facial expressions so well and vice versa.

It also backs up a previous study the researchers did on the "puppy-dog eye" expression, which found that similar evolutionary forces shaped canine eyes to better communicate with humans.