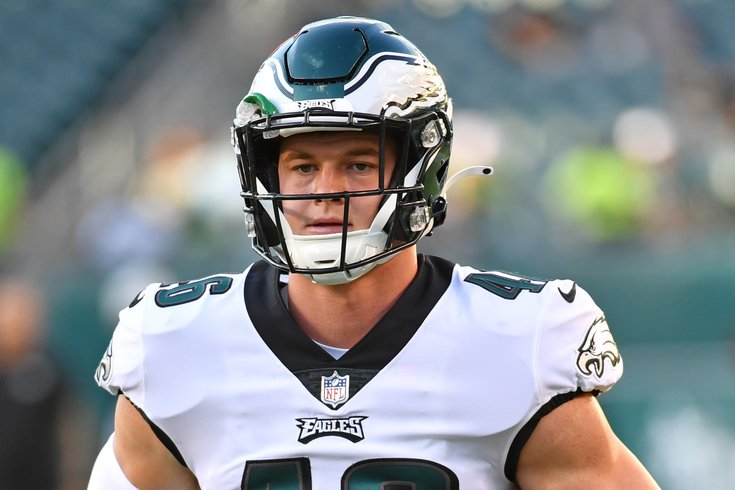 Day 12 of Philadelphia Eagles 2022 training camp is in the books, and it was the final one that the media will be allowed to attend at the NovaCare Complex. No pads today. Let's just get right to it.

• Jalen Hurts had a good day, and his connection with A.J. Brown continues to grow. Hurts hit Brown down the right sideline for a big gain on a ball that was more muscled in, as opposed to lofted over the top. Brown beat Josh Jobe on the play, and the higher velocity throw beat K'Von Wallace to the spot.

Getting back to Hurts, Nick Sirianni was asked on Sunday about what he thought of Hurts' decision-making in the first preseason game, in terms of whether or not to leave the pocket.

"So, it's not as easy to say that the protection broke down, so he left, because that's obvious. I think the thing that is not as obvious is, again, what I said, somebody slipped on a route or the defense played a good coverage and there wasn't anybody open and he's trying to create with a scramble."

How much time a quarterback spends in the pocket and outside the pocket is often nitpicked in Philadelphia. I think back to 2019 when fans and media (rightfully) called for the coaching staff to get Carson Wentz on the move and out of the pocket more.

Not every quarterback is going to be Aaron Rodgers, who can pick defenses apart from the pocket all day or get out on the move and make throws on the run. Would it be nice if Hurts could surgically take apart secondaries from the pocket while also being one of the top two quarterbacks in the NFL at making plays with his legs? Sure! That'd be great!

Hurts is going to leave some plays on the field and miss an occasional open receiver because he left the pocket too early. I think that's a fair enough tradeoff for the plays that he is able to make on the run.

Hurts verdict: On Tuesday, Hurts left the pocket quite a bit, but he also made plays when he did.  📈

• The safety position is one of the hardest to project in terms of who will make the team. The starters remain Anthony Harris and Marcus Epps, but it's anyone's guess who will stick thereafter.

With Epps out today, three different safeties got first-team reps. They were Josiah Scott, K'Von Wallace, and Reed Blankenship.

Scott is pretty much exclusively playing safety now, after previously serving as a slot corner. Wallace has been disappointing as a former fourth-round pick, but he's still getting opportunities to show something.

But it's Blankenship's appearance with the first-team today that is interesting. He has shown good instincts as an undrafted rookie and has put himself in position to make the team. He had an INT of Reid Sinnett today, by the way. He also got hit in the head by an errant throw during special teams drills. #Observations.

Unless I missed it, Jaquiski Tartt and Andre Chachere did not get any first-team reps today. Ugo Amadi, who the team traded for on Monday, was present at practice but did not participate.

• Second-year running back Kenny Gainwell has had an underwhelming camp. His projected role in the Eagles' offense this season is that of a pass-catching back who can line up all over the formation and create mismatches against linebackers and safeties. I haven't seen it. Today he had two drops. One was a difficult catch on a back shoulder throw in the end zone. Tough catch, but you want him to make that. The other hit him in the hands on an out route.

• Britain Covey had an active day. His potential roster spot seemed in peril after he injured his thumb in the preseason game against the Jets, but he's right back out there making catches all over the field.

• Tight end Noah Togiai has been one of the pleasant surprises of camp. He has caught a ton of passes in practices, and he had four catches in the first preseason game.

The Eagles signed Togiai as an undrafted rookie free agent in 2020, and he almost made the final 53-man roster. When the Eagles cut him, the Colts claimed him off of waivers, and he got some playing time early in his career in Indy. However, after having almost no productivity (1 career target, 1 drop), the Colts released him in 2021, and the Eagles added him to their practice squad. He appeared in the meaningless Week 18 practice squad game and made two tackles.

A guy with that kind of profile typically has a steep uphill climb to make the roster. By comparison, rookie sixth-round pick Grant Calcaterra has missed double-digit practices with a hamstring injury. Calcaterra remains likely to make the initial 53, in my opinion, as he should, possibly in favor of Togiai. Training camp isn't always fair, but we'll see. I think Togiai has at least entered the conversation to make the team.

• And finally, we should mention Dallas Goedert, who had a dominant day, and who has had a great camp. We often don't mention the best players in these practice notes because you already know what they're all about, but Goedert could be in for a very good season.

• Throughout training camp, I'll have occasional one-on-one interviews with Eagles beat writers / other media folks while the players are stretching and doing other boring stuff, as well as our regular post-practice podcast recaps. Today I spoke with Zach Berman of The Athletic. Oh, and here's the iTunes link. Review, subscribe, etc.