Who won the week in Philly sports: Eagles fans feel good about team's standing in the NFC 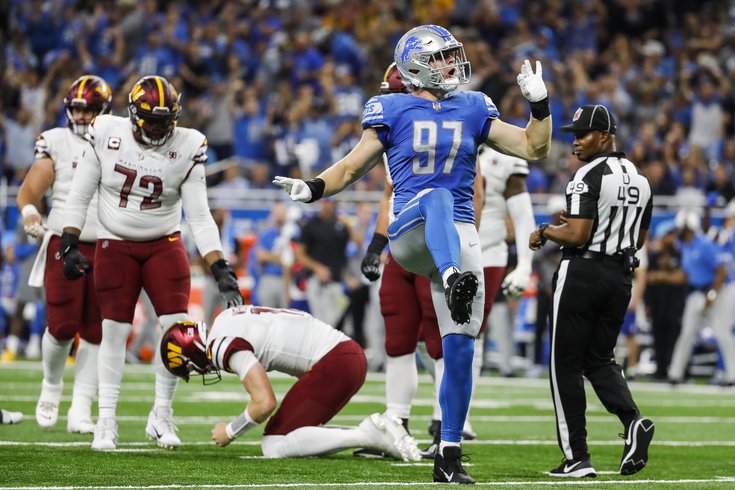 The running "Who won the week in Philly sports" feature takes a weird turn this Monday! With a normal football season schedule, I should be giving props to an Eagles player or figure following a Sunday performance. The Birds, of course, play on Monday Night Football against the Vikings, so my reactionary takes will have to be saved for Tuesday.

It was a freebie for any Phillies player to just hit decently and grab this very prestigious award, but they were promptly swept in Atlanta over the weekend. The Phils had all summer to grab this city's attention, but couldn't do so and now are relegated to the back burner given that Eagles season is in full swing.

I will say, however, that Sunday's Eagles-free slate of NFL games was incredible and there were a few positives for Birds fans who eschewed their usual Sunday traditions and watched nothing but Red Zone for seven hours. Given the hype for Monday's home opener and just the glory that is football in the fall, I'm giving this award to Eagles fans for enjoying a hell of a Sunday.

What Eagles fans learned on Sunday

• Any Given Sunday: Two teams overcame 20-plus-point deficits on Sunday to win: the Cardinals and the Dolphins. The Jets beat the Browns after trailing by 14 points with fewer than two minutes remaining in the fourth quarter. For every Eagles fan who's crawling into a ball on their couch after a three-and-out on the first drive, just know that anything goes in today's NFL. If Justin Jefferson scores on the first play of scrimmage on Monday night, the end is not necessarily nigh.

• The Duality of Carson Wentz: In the Commanders' loss to the Lions (more on that frisky squad in a second), Carson Wentz had great raw stats: 337 passing yards and three touchdowns. He also took four sacks, including one that resulted in an early safety, putting Washington into a quick 22-0 they couldn't climb out of. My favorite non-Kyler Murray play on Sunday was Wentz throwing a flea flicker approximately 500 miles per hour 10 feet over the receiver's head:

This was not close.

A flea-flicker attempt where Wentz and the deep receiver were absolutely not on the same page.

Wentz giveths and Wentz takeths away. The Birds first and foremost need to take care of business Monday night, but Eagles fans should not be worried about their NFC East competition even if their team falls to Minnesota.

• The Lion Kings: Detroit looks... like a pretty decent team? They topped the Commanders 36-27 at home to improve to 1-1. People got a little testy that the Eagles didn't win convincingly enough in their Week 1 matchup with the Lions, but that victory looks even better after Detroit's Week 2 performance. Is Amon-Ran St. Brown just Hines Ward 2.0? Jared Goff is back to respectability? The Lions have some juice and the Eagles' season-opening win looks more impressive now than it did just seven days ago.

Look at how the Birds and their quarterback played against the seam team in the same locale compared to how Washington and their QB fared. That says something.

• Meadowlands Snooze Fest: The Giants and Panthers were locked in an absolute "mid off" in North Jersey. The Giants prevailed by playing just a slightly less disgusting brand of football, becoming one of the worst 2-0 teams in the history of the sport. I do like the energy New York head coach Brian Daboll carries himself with, but Daniel Jones plays worse every single time I watch him.

• Down Bad in Dallas: Every member of the Bengals organization should be overcome with sheer embarrassment after losing to Cooper Rush and the Cowboys as seven-point favorites. Joe Burrow, the entire offensive line, Zac Taylor, everyone. Having some Cowboys schadenfreude would've been the cherry on top for Eagles fans on Sunday. Alas, everything can't be perfect. How about this spin zone: Rush winning a couple of games and keeping Dallas afloat in the mire of mediocrity prevents them from having a top draft pick in 2023. Whatever helps Eagles fans sleep at night!

Who lost the week in Philly sports: The Fightins 👎