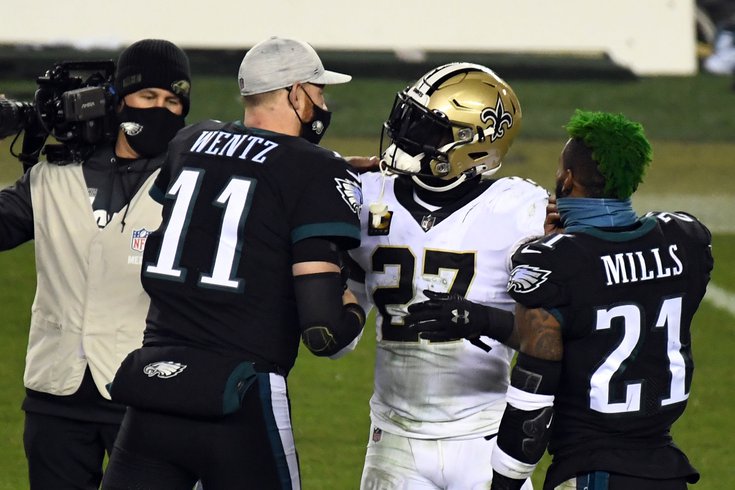 For a guy who hasn't spoken publicly since early December, nearly two months ago, it sure seems like we spend a lot of time talking about Carson Wentz.

Some of that is the nature of the beast — he's the highest paid player on the most popular team in the city, playing the most important (and unique) position in all of sports. Some of that is because his silence created a vacuum that, as expected, is being filled by the opinions of others rather than his own feelings on the topic. And some of it is because the Eagles were an absolute dumpster fire in 2020 and Wentz played a big role in that, as he played the worst football of his career last season and was ultimately benched in favor of a rookie, leading to the ouster of the only coach in franchise history to win a Super Bowl title, Doug Pederson, just three years after leading a parade down Broad Street.

On top of all that, it seems like every week there's a new story coming out about Wentz and his behavior inside the NovaCare Complex, whether it's isolating his teammates, his refusal to accept coaching or take accountability, or his butting heads with Pederson.

These sorts of leaks have been happening for two-plus years now, even as the players and coaches around him have changed. It's clearly concerning, and on Friday, one of Wentz's former teammates — not just any teammate, but an unquestioned leader in the locker room during his time in Philly — put some more context on the struggles surrounding the 28-year-old quarterback. More importantly, he actually put his name on it.

Here's more from for Eagles captain Malcolm Jenkins' appearance on The Rich Eisen Show, in which the veteran safety explained why he thinks Wentz underwent a historical regression in 2020, courtesy of NJ.com's Mike Kaye...

“There was too much leeway and it didn’t make him a better player,” Jenkins said. “I don’t think they did him any favors by trying to protect his ego or trying to really protect him as a player, as opposed to keeping it like every other player and keeping it performance-based and really being real about what he needed to improve on -- but also adjust to put him in position to make him successful. I think that’s a little bit on the coaching staff, that’s also some onus on the player.”

With Pederson out of the mix, Wentz still remains. Sirianni will try to repair Wentz’s game, but Jenkins believes it’s on the quarterback to fix himself this offseason.

“Every player should go into every offseason, evaluating what they did well, what they didn’t do well,” Jenkins said. “You look to see improvement year after year. But, if that’s not the case, and you don’t see, and there are no changes, and it’s not being addressed, as a player you almost feel like ‘What are we doing?’ To do the same thing over and over again, and expect the same results is insanity. Unfortunately, I think that a little bit of that has taken place there over the past few years and obviously, this offseason showed that some things needed to change in a major way. Carson is still there -- and regardless of who they bring in to coach him and get him better -- he’s still going to need to improve as a player in order for that team to have success.”  [nj.com]

For starters, there's Wentz's reported desire to seek a trade if he's not the starting quarterback next season. That comes with its own set of problems, not the least of which is his massive salary cap hit the Eagles would still be forced to take combined with what will certainly be a diminished value following a career-worst year. Then there's the question of just how tied the Eagles are to Wentz, as new head coach Nick Sirianni was non-committal during his introductory press conference on Friday.

That's on top of Sirianni saying the team has "two top-notch quarterbacks" in Wentz and Jalen Hurts, as well as him saying that he hasn't even started to think about when he would like to have his quarterback situation sorted out by.

One thing seems certain, however. If the Eagles decide to keep Wentz, they're not only going to have to fix the quarterback, but they're going to have to fix the way in which he's been coached as well. Having a new staff around him certainly helps, but it's still a tall task for a first-time coach who might not even out-rank his quarterback in the eyes of his bosses.