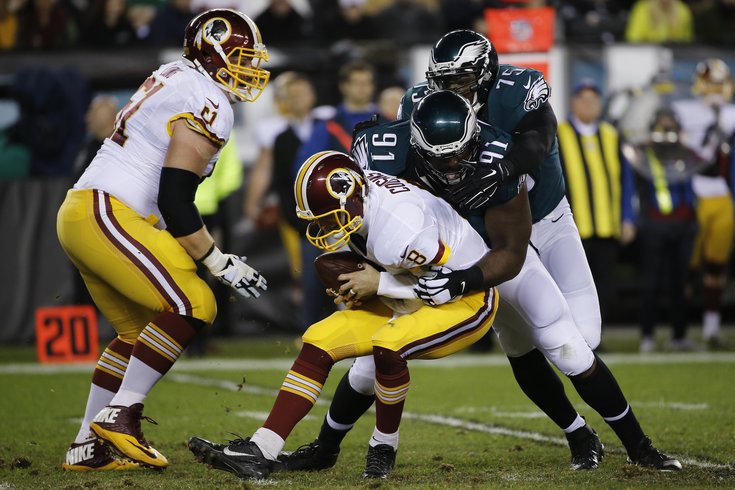 After beating the Washington Redskins in each of his first three games against the Eagles division rival, former head coach Chip Kelly walked away with a win. The next three times these teams met, it was three straight losses for the Eagles, the last of which was Kelly's final game in Philadelphia as coach.

Now, facing an NFC East opponent for the first time as a head coach, Doug Pederson will look to reverse that recent trend on Sunday when the Eagles head to FedEx Field to take on Kirk Cousins and the 3-2 Redskins.

Like Pederson, Eagles rookie Carson Wentz will get his first taste of what a divisional rivalry feels like, and after having a week to stew over the fact that the last pass he threw was a game-ending interception that sealed the team's first loss of the season, he's likely more anxious than usual to get out on the field.

Here's a look at how our staff sees Sunday's game, one which could help predict the winner of next month's presidential election, playing out.

The Redskins have some injury issues.

• They will be without both starting safeties, DeAngelo Hall and David Bruton, who are both on injured reserve.

• CB Bashaud Breeland, who has been out since Week 2 with a sprained ankle, could return this week, but may not be 100 percent even if he does.

• CB Josh Norman injured his wrist last Sunday against the Ravens, and called himself the 'one-hand bandit' after the game, because he could not use one of his hands.

• LB/S hybrid Su'a Cravens missed last week with a concussion, and he is still in the concussion protocol, as of Tuesday evening.

So to recap, the Redskins' starting secondary has two banged-up corners, two missing safeties, and they could be missing their best cover linebacker.

A week ago in Detroit, the Eagles faced a Lions team that was similarly devastated by injuries but could not capitalize. They will not squander a similar opportunity for the second straight week. Eagles, 27-23.

From here, the Eagles beat themselves more than anything last week. Matt Stafford was pretty much perfect in the first half and deserves a lot of credit, but that still felt more like an Eagles loss than Lions win.

WASTEAM has won three games in a row, but I’m not as impressed by Captain Kirk Cousins as much as their offensive line and skill guys. The most intriguing matchup in this game to me, strength against strength, is Fletcher Cox and Bennie Logan against the interior of the R’s offensive line. Speaking of their skill guys, Jordan Reed would and should be a big loss. That guy can ball. Even without Reed, I expect DeSean Jackson to haul in a bomb (#JACCPOT) against his former (and future?) team because, well, that is what DeSean does.

The question offensively for the Eagles is simple: How does the line, specifically Big V, hold up in this one? If Carson Wentz isn’t under siege, he’ll find passing lanes against a banged up WASTEAM secondary. I say Dougie P schemes to help his rookie right tackle and the defense forces a couple of turnovers against Cousins as the Birds get back on track for a huge matchup against the undefeated Vikings.

Heading into last week's game, I felt pretty confident that the Eagles were going to beat the Lions soundly, which would cause them to overlook the Redskins in anticipation of their Week 7 matchup against Sam Bradford and the undefeated Minnesota Vikings. Then, they would respond by blanking the Vikings at home.

Now, I'm not so sure. The one thing I do know, the thing that the Eagles learned last weekend in Detroit, is that momentum can be your best friend right up until the moment it turns into over-confidence. The Lions were a desperate team coming off three-straight losses and the Eagles were not only undefeated, but had a top five defense and offense. This week, the roles could be reversed.

Sure, the Eagles haven't lost three in a row, nor is their season in peril, but there's a good chance there going to be seeking some revenge. The Redskins, on the other hand, have won three straight after starting 0-2. Just Norman isn't 100 percent, and that's just the start of Washington's injury problems on defense. And on offense, they will likely be without Jordan Reed, who went off for 11 catches, 129 yards and a pair of touchdowns when these teams last met.

I expect the Birds offense to be fine – assuming Lane Johnson's absence doesn't turn Big V into Winston Justice 2.0 – and if the defense plays closer to what we saw in the second half against the Lions, Pederson and Wentz will come away with their first NFC East win.