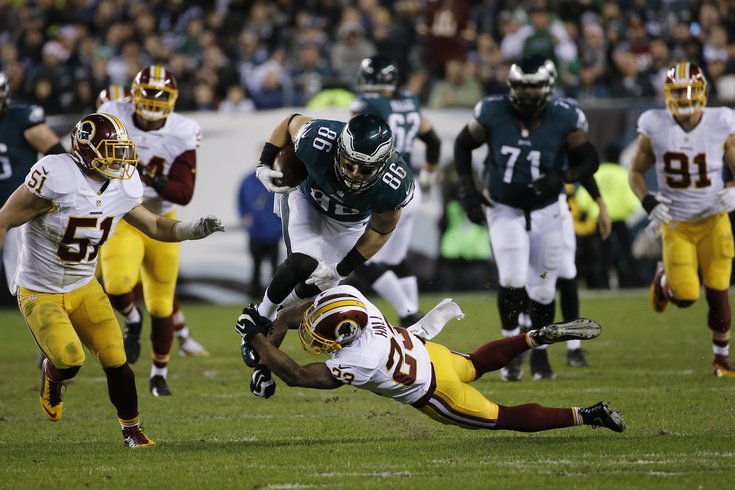 Things got a little scary at the NovaCare Complex on Friday morning when Jordan Matthews and Zach Ertz were forced to leave Eagles practice early after taking low hits from a pair of rookie defensive backs -- Jaylen Mills and Blake Countess -- during the "live" tackling period.

Luckily, the injuries don't seem too serious. But considering this is the first camp for both players in which tackling is permitted -- Matthews and Ertz were drafted during the Chip Kelly years in which there was no tackling to the ground in practice -- the hits delivered by the Eagles rookies served as a reminder of the dangers that come with going full speed.

Problems tend to arise when you have rookies and journeymen vets vying for their livelihoods alongside your team's best players in a game as physical as football. And in the case of Ertz, who was evaluated for a concussion and later cleared, he took some exception to the low hit delivered by Countess, the rookie safety who played at both Michigan and Auburn.

“Guys gotta be pros. Rookies coming in, they don’t know what the atmosphere is like, the respect that’s given in practice,” Ertz said, according to PhillyMag's Tim McManus. “I think it needs to be addressed, but it is what it is. It’s live football, so that situation is in the game. We got to get ready for it. Obviously, Jordan and I getting hurt today, you don’t want to see that.”

For his part, Countess was willing to acknowledge that his hit was low, adding that it definitely wasn't intentional and that if he could do it again, he "probably would change some things."

"You want to take care of your teammates," the sixth-round pick said. "In the heat of the moment, being aggressive and the type of player I am, it just happened."

Countess also said that, despite his need to compete for a roster spot, the blame rests squarely on him and he should know better. [For the record, this was immediately after practice, before Ertz had a chance to deliver the message himself.]

"It's not [hard to balance tackling and avoiding injury]. Especially at this level, you've got to be able to practice like that," he said. "That's really on me."

Mills, a seventh-round out of LSU who found himself in a similar situation at practice, said he's not going to slow down, but may adjust his strategy.

"I'm not going to do anything different," Mills said. "I'm going to come the same, full speed. Just in practice, right now though, I may try to change it up a little bit because we do need every guy out here right now going into the preseason. But, for sure, I'm going to keep playing fast."

I just know this: Football is a contact sport. This is going to happen. ... I'm a big believer [that] you never shy away from contact.

But unlike the Eagles tight end, coach Doug Pederson didn't seem to have much of a problem with the hits in question.

"We're in a live situation, so I understand the competitiveness of the drill," he said. "I've tried to get the message across sometimes, just to protect each other, try not to go low if you can. It's reactionary stuff. And, you know, you can't fault the players for trying to make plays."

And, at least for now, nearly losing Sam Bradford's two most productive receivers from 2015 wasn't enough to scare the rookie head coach into dialing back the physicality at practice.

"You know, you just keep training the guys. You keep talking to them about protection. Every drill doesn't have to be live, but at the same time we can still be in position to make tackles and form fit and run game, offensive linemen. We stay up and we learn to do it that way, and it becomes a sign of the football. But, again, it's part of the game. We'll continue to obviously monitor the guys, but at the same time, [we] won't shy away from the contact."

He and his staff, however, did have a message for Mills after the hit on Matthews.

"Just be smart," Mills said when asked what his coaches told him. "They love that I'm playing fast, but be smart."