Eytan Shander: Has anyone ever done less with more than Doc Rivers? 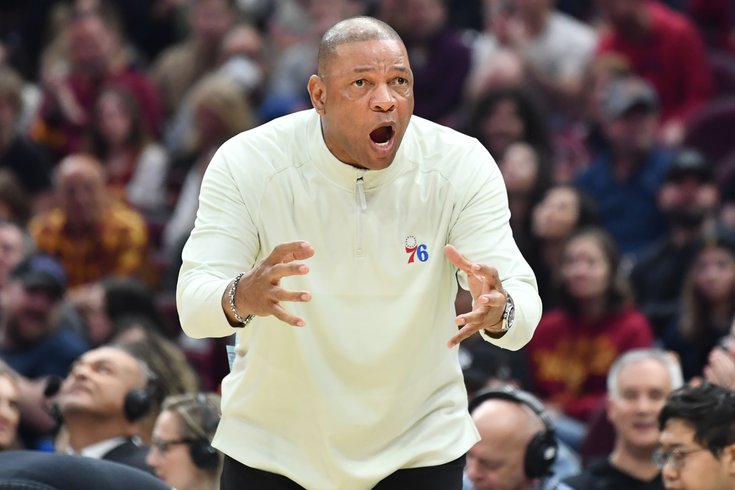 Doc Rivers and the Sixers continued their push for a top seed in the East Sunday.

Mr. Morey is about to make the biggest – and arguably only true – mistake of his tenure atop the Sixers brass.

To bring back Doc Rivers is to accept mediocrity in a league that punishes you more than any other for sitting in the middle. It’s a slap in the face to the progress made by Joel Embiid, physically and on the floor. It laughs in the face of the window that seems to be closing faster each year with another injury derailing Embiid. It mocks the development potential of one of the league’s bright young stars in Tyrese Maxey. It’s a gut-punch to every single fan who sat in that building and saw their favorite team’s soul evaporate at the hands of Jimmy Butler.

There are a lot of things that need to happen this offseason and not one single person deserves the blame for how things ended. The team needs a new voice, one that has a stronger connection to the younger player and can grow a seed.

The team was an unmitigated disaster with the cowardly move by Ben Simmons to refuse to return to this team, leaving them hamstrung to trade for James Harden on a downswing due to injury.

They lack depth and are poorly structured from a rotational standpoint. Be it health or fading, Harden was lost against the Heat when it mattered most. Miami confused him like a rookie at times and Harden was left helpless.

They have no depth and if Embiid is out or struggling, they have no team. The lone bright spot is Maxey. A build-around young guard who has everything needed to elevate his play to a higher tier. Do you trust the current staff to maximize Maxey?

Tobias Harris and Danny Green make too much money for their current returns. We wish them well but freeing up money – including a team-friendly deal with Harden which appears inevitable – is the only option.

Part of what made Embiid’s claim to the MVP so valid was how bad or disastrous or simply limited everything else was around him.

Things need to change, not stay the same. This can’t be a run it back scenario. Nobody is blowing anything up or re-processing the team. You can make some quasi-major moves and have an entire season to make it work. This should be the focus.

Bringing back a proven above-average coach isn’t the answer and does more damage to the above process plan than not. It’s been a long time since Doc left the second-round but that’s only part of the story. The rest of it lies in why bringing him back to run the team from a coaching standpoint would be a derailment at best.

I would have no issue with bringing Rivers somewhere above the coaching ranks, failing upwards seemed to work for Brad Stevens in Boston. The point being is that Rivers has 23 seasons under his belt in the NBA, and might prove a valuable piece in Morey’s cabinet.

Just not as the coach.

Over the past nine seasons has anyone done less with more than Rivers? This argument may stretch out into the rest of sports. He’s had some of the top talent in the league, Hall of Famers, and struggled to make it deep into the playoffs. Other coaches have seemed to get more out of the same, including Monty Williams with Chris Paul.

It’s worse than that, and this is who the team is entrusting the development of Maxey and pushing Embiid over the hump to the finals. Rivers won a championship, but much like his Phillies counterpart, it was during a time that has since changed in his sport. A new era that seems to confuse coach Rivers more than reward him.

Doc’s first year in LA saw a postseason trip cut short in the second round. The team was stacked with stars in Chris Paul and Blake Griffin, and aided by vets like Jamal Crawford, J.J. Redick, and Matt Barnes. They also had one of the top defensive players in the NBA in Deandre Jordan. There were younger players on that team as well, like rookie Reggie Bullock who is now playing in the Western Conference Finals.

Next year, same story, same result. While Griffin missed time, Paul and Jordan played all 82 games that season. The team still relied on top talent but had veteran voices throughout that locker room.

The next year Paul Pierce walked through that door and the Clippers were embarrassed in the first round of the playoffs. They lost 4-2 to the 5th seeded Blazers leaving many scratching their heads as to the culpability with Doc in all of this losing.

They ran it back, sound familiar? Same story, same result. The 4th seeded Clippers were beat by the 5th seeded Jazz. The next two years were rough all over for LA. It actually gives Rivers a break since finishing 10th then 8th weren’t his fault so much as the team was strapped. But his final year continues this push that no coach has done less with more talent.

Losing in the second round once again with Hall of Fame players. It seems to be the M.O. of the current coach. Kawhi Leonard and Paul George were on a team together and they got slammed in the second round. It’s just ridiculous to even contemplate. This team had Patrick Beverly and vets like Lou Williams and Marcus Morris. Too good to lose that early.

The last two seasons are more of the same story just a different cast. Although Tobias Harris has found a way to reprise his role. Nobody can look at that history of losing with so much talent and feel comfortable with entrusting that same person with the development of a young star.