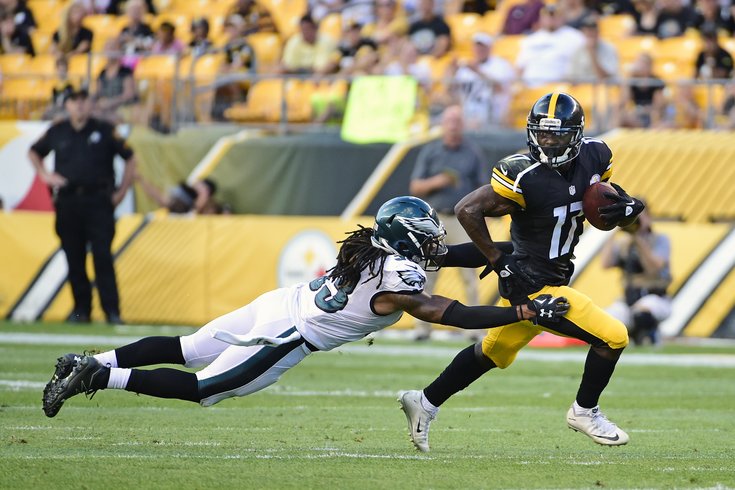 Pittsburgh Steelers WR Eli Rodgers tries to escape the tackle of Philadelphia Eagles CB Ron Brooks when the two teams met in Pittsburgh during the preseason.

It's not going to be easy for the Philadelphia Eagles to improve to 3-0 on Sunday when they host Ben Roethlisberger and the Pittsburgh Steelers, but that doesn't mean it's totally impossible. And even though we don't really see a win for the Eagles, that hardly means it's time for Eagles fans to panic.

Normally, when we do the five over/unders each week, it's about how we see the game actually playing out. But so far, these are landing successfully at a rate below 50 percent -- so be thankful these, for the most part, aren't actual things on which you can place wagers -- so we're going to switch it up. Instead of trying to predict what's going to happen on the field, here's a look at five numbers that will directly impact the Birds' chances of remaining the lone undefeated team in the Keystone State.

Remember, a win isn't out of the realm of possibility. Should that happen -- and the Eagles improve to 3-0 heading into the bye week -- it's going to send fans into full-on Wentzmania.

It could mean the end of this city as we know it.

And that's just from people trying to get their hands on Wentz jersey.

The Eagles have scored 29 points in each of their first two games. Against the Browns and Bears, that was more than enough to win, but against the Steelers, it may not be enough to get the job done. And yes, that's despite the fact that the Birds defense leads the league in points allowed with just 17 (the other seven they surrendered against the Bears came on special teams). But they're not facing the Browns or Bears on Sunday.

The Steelers have the ability to put up points -- and put up points in a hurry. I don't think the Eagles offense will struggle to score close to what they have in their first two games, so this really all comes down to how Jim Schwartz can contain Big Ben and Antonio Brown without one of his starting cornerbacks in Leodis McKelvin. Their best chance to win on Sunday is keep the scoring to a minimum. It's hard to envision a scenario in which the Eagles beat the Steelers in a shootout. But if they can keep their cross-state rivals in the low 20s, then they should have a chance to win the game.

That's the rookie's average passer rating through his first two NFL games. Not. Too. Shabby. Against the Steelers on Sunday, he'll need to keep up that pace in order to pick up another win. Wentz's receivers can help his cause by holding on to the ball -- specifically when they're beautifully thrown touchdown passes -- and look for another healthy dose of TE Trey Burton, who was targeted seven times against the Bears and caught five passes for 49 yards, including his first NFL TD.

Last week, the Steelers defense allowed 18 receptions and 181 yards to Bengals running backs and tight ends, so look for Wentz to rely on Darren Sproles and Ryan Mathews in addition to Burton and Brent Celek. They also allowed Andy Dalton to throw for 366 yards (on 51 attempts). Unfortunately, they've also only allowed one passing touchdown all season (last week to Dalton) and opposing QBs have an average passer rating of 79.2 this season.

Considering that 347 of the nearly 400 yards the Steelers have allowed per game so far this season have come through the air, Wentz is likely going to be asked to do more this week than was in either of the first two weeks. Against the Bears, his 86.6 passer rating was more than enough to get the job done, thanks in large part to three big turnovers and another 100-yard game from his backfield. Against the Steelers, especially if they struggle on the ground, Wentz could be the difference-maker.

If you're unfamiliar, "X plays" is another term for extra-yardage plays, for any pass play of 20-plus yards. So far, the Eagles have allowed five of these through their first two games -- two against the Browns and three against the Bears. The Steelers had five against Washington, including two to Antonio Brown for touchdowns, and another four in their win over the Bengals, including another touchdown.

Malcolm Jenkins and Rodney McLeod are going to need to step up big time in this one with McKelvin sidelined, but if they can prevent the Steelers offense from eating up big chunks of yardage at a time, it will go a long way towards winning the game.

Despite being tied for the third most offensive plays run per game (70.5), the Eagles have yet to turn the ball over this season. They're not going to be able to keep that up all season, obviously, but the better they are at limiting turnovers, the better served they'll be on Sunday when they face a Steelers team that's on the positive side of the turnover differential and has yet to lose a fumble this season.

Roethlisberger has thrown a trio of picks so far this season, meaning they're averaging 1.5 turnovers per game. The Eagles defense can help the cause by forcing more takeaways, but if they can only manage one or two, Wentz and the offense better protect the ball. Otherwise, it's going to be a long day for the Birds.

In Week 1, Beckham was behind Josh Huff on the depth chart and did therefore didn't start against the Browns. He played on just 32 percent of the snaps in that game, but after hauling in both of his targets (and learning more of the playbook) DGB moved into a starting role against the Bears. In that game, he caught two of his four targets and was on the field for 46 percent of the offensive snaps, compared to just 19 percent for Huff.

As Jimmy Kempski pointed out on Friday, there's a good chance that we see more from Green-Beckham against the Steelers as he's becoming more familiar with the new system. And when you add in the size advantage he has over Pittsburgh's cornerbacks, the 6-foot-5 wideout could see Wentz look his way even more often this week. Taking advantage of potentially favorable matchups is always a good idea.