Can you float yourself to better health? What the science says about sensory deprivation tanks 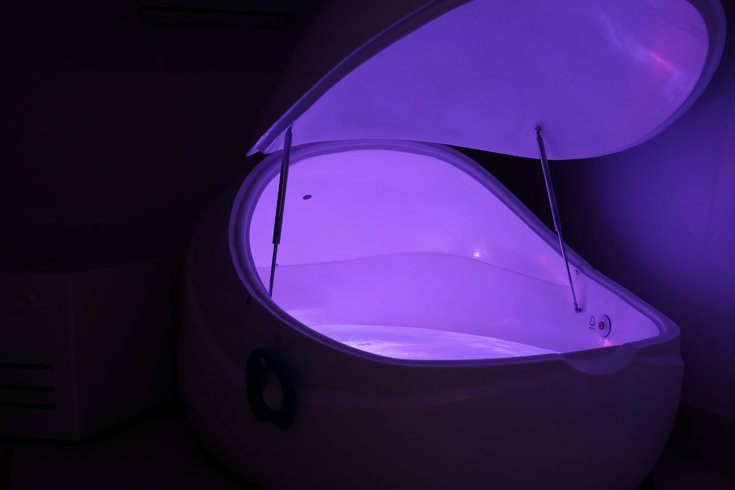 Flotation tanks have been used since the 1970s, but they continue to capture attention for their purported health benefits.

Tom Brady and other athletes have touted flotation tanks as a way to speed up muscle recovery. Celebrities like Elle Macpherson and Jennifer Lawrence have heralded the calming effects and skin benefits of immersing themselves in salt water.

Even some of your friends and family may have tried a flotation tank at one of the many spas in the Philadelphia region equipped with them.

A therapeutic session involves floating nude in a dark, soundproof tank filled with a foot or less of salt water heated to skin temperature. The Epsom salt makes it easier for people to float.

The idea is that once the tank lid is closed, people are cut off from all sensory stimulation, inducing a deeply relaxed state. Some studies have shown that hour-long floating sessions in these tanks can soothe sore muscles, improve sleep and decrease stress, anxiety and pain.

Restricted environmental stimulation therapy, or REST, has been around since the 1970s, but it still continues to capture attention for its purported health benefits.

What does the science say?

The REST therapy's effects on athletic performance have been well documented. It speeds up the body's recovery by decreasing blood lactate, an indirect marker for muscle fatigue, according to the University of California, Davis. Plus, a 2016 study of 60 elite athletes found it improves psychological recovery.

There also is scientific evidence that it can reduce stress, tension headaches, muscle tension and pain, and help treat anxiety disorders. One 2018 study found that just a single one-hour session in a sensory deprivation tank brought significant reduction in anxiety in 50 people living with stress- and anxiety-related disorders.

Sanam Hafeez, a neuropsychologist at Columbia University says that though clinical research on REST is limited, it points to possible benefits for people with hypertension, chronic tension headaches, and chronic muscle tension pain in the back and neck.

Dr. Nathaniel Morris, a psychiatry fellow at University of California, San Francisco, tried it for himself in 2018 and found it to be a "calming" experience, but he told The Washington Post at the time that larger, higher quality studies are needed before he would recommend his patients pay money for it. Depending on the location, a one-hour session can cost anywhere from $50 to $100.

Just recently, a larger study of nearly 100 people found three weeks of REST treatment did not offer any long-lasting relief for their chronic pain.

One-third of the participants were randomly assigned to undergo REST in a flotation tank. Another third spent time in a placebo tank environment that had less water buoyancy and less control over light and sound. A third group just continued their normal pain control treatment.

"We found no long-term effects of floating on chronic pain, but strong short-term improvements," said Jorge Manuel, one of the German researchers who conducted the study. "These improvements were similar in the placebo group, suggesting that they might not be caused by sensory deprivation or effortless floating as previously thought."

Some data also suggest REST therapy can improve concentration and focus, and enhance creativity and imagination.

Are there any negative drawbacks?

Though current research indicates flotation therapy is safe for healthy people, studies have shown some people may experience hallucinations in the sensory deprivation tank.

Some floaters also may experience claustrophobia and skin irritations from the Epsom salt in the water. People with ear tubes may have some discomfort from water getting into their ears as well. Drowning is always also a risk, although very rare.

It is important to visit a spa that has strong medical emergency policies in place in case people experience any difficulties in the tank.

Experts emphasize that REST therapy is not recommended as a treatment for any specific condition and should never be used as a replacement for evidenced-based treatment options.