'I am not okay with the state of this country,' Kapler wrote in response to the school shooting in Uvalde, Texas 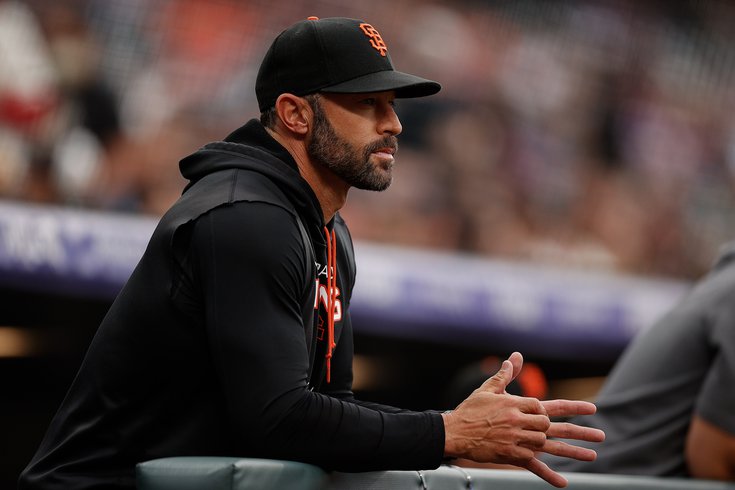 Giants manager Gabe Kapler said he will no longer come onto the field when the national anthem is played before games to protest the inaction by U.S. leaders following the school shooting in Texas. 'Every time I place my hand over my heart and remove my hat, I’m participating in a self-congratulatory glorification of the ONLY country where these mass shootings take place,' Kapler wrote in a blog post.

Gabe Kapler wasn't on the field for the national anthem Friday when his San Francisco Giants took on the Cincinnati Reds, and he'll continue to stay in for the anthem moving forward.

After the school shooting in Uvalde, Texas took the lives of 19 children and two teachers, the former Phillies manager published a blog post critical of the current state of the country and his own failure to make any sort of protest during the anthem for the two games that followed, fearing that any action he took would have been misinterpreted.

"I am not okay with the state of this country," he wrote. "I wish I hadn’t let my discomfort compromise my integrity. I wish that I could have demonstrated what I learned from my dad, that when you’re dissatisfied with your country, you let it be known through protest. The home of the brave should encourage this."

He later told reporters of his plans to protest the anthem going forward.

Gabe Kapler told reporters in Cincinnati that he doesn't plan on coming out for the national anthem and that will be his plan going forward "until I feel better about the direction of our country."

On Tuesday, an 18-year old entered Robb Elementary School with an assault rifle and began firing, and now the police response has come under heavy scrutiny as more details come to light.

"We elect our politicians to represent our interests. Immediately following this shooting, we were told we needed locked doors and armed teachers. We were given thoughts and prayers. We were told it could have been worse, and we just need love.

"But we weren’t given bravery, and we aren’t free. The police on the scene put a mother in handcuffs as she begged them to go in and save her children. They blocked parents trying to organize to charge in to stop the shooter, including a father who learned his daughter was murdered while he argued with the cops. We aren’t free when politicians decide that the lobbyist and gun industries are more important than our children’s freedom to go to school without needing bulletproof backpacks and active shooter drills." [KapLifestyle]

Kapler, who managed the Phillies for two seasons (2018-19), is one of many across the sports world who have expressed their heartbreak and anger with the U.S.'s latest mass shooting.

Within baseball, Phillies radio broadcaster Scott Franzke delivered heavy commentary ahead of Wednesday's game against the Braves, and the social media teams for the Tampa Bay Rays and New York Yankees tweeted facts about gun violence throughout their game Thursday night rather than offer any highlights or scores.

"Every time I place my hand over my heart and remove my hat, I’m participating in a self congratulatory glorification of the ONLY country where these mass shootings take place," Kapler wrote.