How the federal government came to control your car's fuel economy 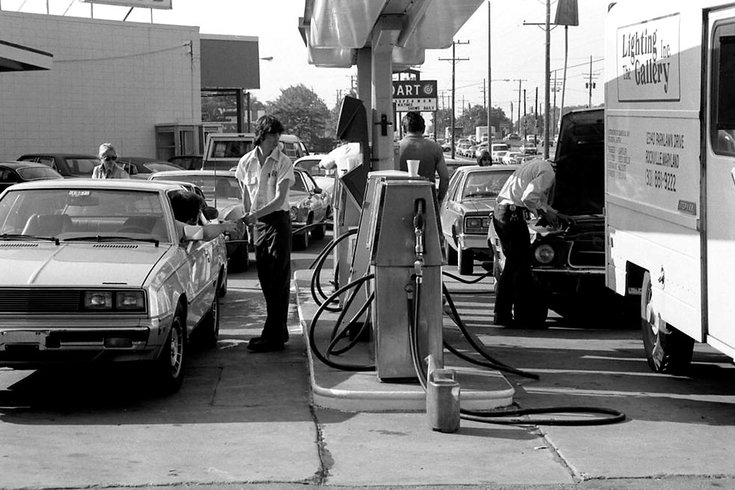 Long lines of motorists wait at gas stations during the 1979 oil crisis.

The Environmental Protection Agency in August announced a plan to freeze fuel economy standards and revoke the ability of California to set more stringent rules than the national ones, prompting a legal showdown between the state and the federal government.

The proposal, which would keep fuel economy at planned 2020 levels, is the most significant step to halt the rise on the mileage standards of the U.S. passenger vehicle fleet in decades.

But how did fuel efficiency even become mandated? After all, manufacturers go to great lengths to analyze the consumer marketplace and build in the most tantalizing features to create top sellers, whether it’s great acceleration or a deep bass sound system. One feature is different, though: Carmakers are legally bound to innovate more efficiency into their vehicles.

The regulations requiring higher efficiency – known as the Corporate Average Fuel Economy standards – are one of the clearest vestiges of lessons the U.S. learned during the 1970s energy crisis. And most experts agree that by every measure, they show that thoughtful regulation can drive industry to improve basic aspects of the consumer market, in this case automobiles, through innovation and designs that prioritize efficiency.

But today, the Trump administration argues that such regulations may be “too stringent.” From my perspective as a historian, I see this move to put the brakes on rising fuel efficiency rules as a sea change in the country’s priorities on energy and oil consumption.

It was a panicked moment in 1977 when President Jimmy Carter stood in the Oval Office to “have an unpleasant talk with Americans about a problem unprecedented in our history.”

The Arab members of OPEC had embargoed oil shipments to many Western nations, resulting in temporary shortages in supply. But the U.S. after World War II had come to assume an infinite oil supplies. Though temporary, lines at gas stations and market shortages caused what was called an “energy crisis.”

Carter identified the essential problem as energy gluttony on which he declared the “moral equivalent of war.” And CAFE standards marked a significant part of the federal response to the new reality of energy resources as finite – not limitless.

Most radical, though, the new standards redefined vehicles in a way that returned to the ethic of Henry Ford when vehicles possessed neither options nor variations. Behind the options and bling, the auto could now be measured primarily for the effectiveness with which it carried out its basic purpose: transporting humans. As a remarkable example of the “softer energy paths” extolled by environmental scientist Amory Lovins and others in the 1970s, CAFE standards recast the primary purpose of autos in the U.S. beyond devices for personal transportation. While they could offer various comforts and symbols of “bling,” American-made cars now had to perform their basic purpose – transportation – efficiently.

The 1975 law required that each vehicle openly post its miles per gallon rating, similar to listing ingredients in food that was required by the Food and Drug Administration. The law also required manufacturers to achieve the more challenging goal of improving fuel efficiency to reduce pollution and limit dependence on foreign oil. And they did: In 1978, American autos averaged 13 miles per gallon compared to 22 mpg in other Western countries; the law set the goal at 28 mpg for new American cars by 1985, which manufacturers achieved.

A man directs traffic at a gas station during the oil crisis in 1979.

Left open to political shifts, the CAFE standards have been adjusted up and down by each administration.

After rising significantly in the 1970s and early 1980s to 27.5 mpg, the fuel efficiency standards stayed more or less steady until the 2000s. In many cases, the auto industry lobbied against raising levels. 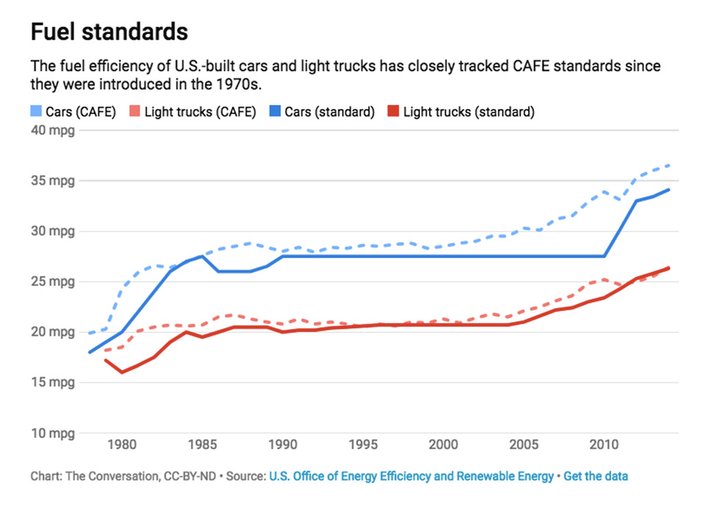 Then in 2007, Congress under President George W. Bush passed an energy law that put in place the first changes to U.S. fuel-economy standards in almost 20 years, raising the levels for auto manufactures to meet. In 2009, the Obama administration raised the goals even further and tied the decrease in emissions to progress toward fighting climate change, not only reducing oil consumption.

The proposal reflects the Trump administration’s commitment to deregulation as a way to stimulate the economy. It also demonstrates a major change in how the U.S. views oil and gasoline. In the 1970s, the U.S. experienced how dependent it was on foreign suppliers; today, the U.S. is now one of the world’s leading producers of oil.

Even if most consumers wouldn’t make efficiency a primary rationale for selecting a vehicle, time has shown that Americans from a wide swath of the electorate look favorably on spending less cash on gasoline.

California said it intends to fight back against the proposal, which suggests that CAFE standards will be a primary battlefront in the effort by states willing to stand against loosening environmental regulation.