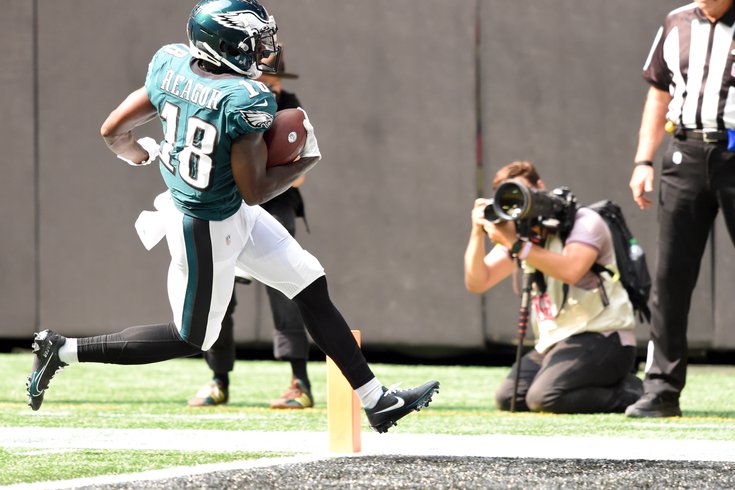 Eagles wide receiver Jalen Reagor is grieving the loss of a former college teammate and NFL cornerback who was killed in a car crash on Memorial Day.

Jeff Gladney, a 25-year-old defensive back with the Arizona Cardinals, died in the crash along the Woodall Rogers Freeway in Dallas around 2:30 on Monday morning. When first responders arrived at the scene, they found Gladney's white vehicle had overturned. He and his girlfriend, who has not been identified, both suffered fatal injuries, ESPN reported.

A preliminary investigation found that the crash involved two cars. The white vehicle had been speeding before it clipped a second car from behind and then struck a pier beam on the freeway, according to the Dallas County Sheriff's Office.

Gladney was originally a late first-round pick of the Minnesota Vikings out of Texas Christian University, where he and Reagor became close friends. Reagor was the Eagles' first-round pick in the same draft.

Both players had difficult starts to their NFL careers.

Gladney became buried on the Vikings' depth chart during his rookie season and was cut before the start of the 2021 season after he was indicted on charges of felony assault. He was later found not guilty and had just signed a two-year deal with the Cardinals in March. Reagor has struggled to find consistency in the Eagles offense and has been overshadowed by other wide receivers selected in the 2020 draft — most notably Vikings star Justin Jefferson, who was selected by the Vikings right after the Eagles took Reagor.

In a series of tweets on Monday, Reagor mourned Gladney and called him his best friend.

Lost my Brother, my best friend, my right hand man… ain’t too much more I can take man damn!

Imma miss you like Crazy bro… watch over me please. pic.twitter.com/vFMt8VNIMQ

This is the second consecutive offseason that Reagor, 23, has lost a close friend. Reagor missed a portion of training camp last offseason, in part, because of the murder of a childhood friend.

We are deeply saddened by the tragic loss of Jeff Gladney.

May he rest in peace. pic.twitter.com/lkeUxBZ4DW

The NFL family mourns the tragic loss of Jeff Gladney and we extend our deepest condolences to his family and loved ones. pic.twitter.com/FgN5T62q3I

Saddened by the tragic loss of Jeff Gladney. We extend our deepest condolences to his family and loved ones. pic.twitter.com/FvilWRtNAu

Reagor is entering his third season in Philadelphia, where he's now expected to have a reduced role in a passing attack that features A.J. Brown, DeVonta Smith, Dallas Goedert and Quez Watkins. It's time for Eagles fans to put aside their feelings about Reagor's on-field struggles and just help create a better environment for him to thrive. He's a young player who's been dealt a number of setbacks. He could still be a contributor this year and his best days in the NFL are ahead of him.