John McMullen: Carson Wentz gave Doug Pederson no choice but to bench him for Jalen Hurts 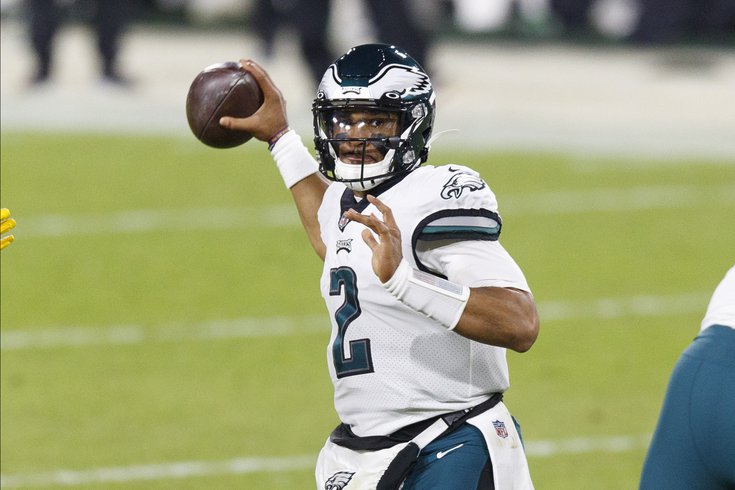 Jalen Hurts finished the game Sunday — so what now?

You can make any excuse you'd like for Carson Wentz and we can stipulate some of them are more than valid, but Doug Pederson had no choice. His QB1 had to be benched during an ugly 30-16 loss in Green Bay on Sunday.

The Eagles' wide receivers are admittedly a disaster and the revolving door on the offensive line is too often a sieve. Throw Pederson’s play-calling in the mix if you like, and double down with Press Taylor’s cameos there or his soft touch as a position coach. Add Duce Staley’s inability to get movement plays in the game plan and Rich Scangarello’s hurry-up instructions.

Heck, throw in the problems in the Middle East or Donald Trump’s voter-fraud accusations weighing heaving on the Eagles’ QB1.

None of it matters.

Wentz is performing so poorly that nothing, not even his massive contract and the realization that Howie Roseman has the Eagles in salary-cap hell come 2021, could stop what came in the third quarter in Titletown.

Pederson had no choice but to call Jalen Hurts’ number.

In a league that masquerades as a meritocracy, if you’re performing like the worst starting QB in football, well you can’t be a starter any longer.

A rare big play from Wentz to Dallas Goedert was followed by misfires to Zach Ertz and John Hightower and down 20-3 by the time Philadelphia got the football again Pederson cried “No Mas.”

“At the time, just where we were as an offense, I felt we needed a spark,” the coach claimed. “We needed something to kind of go our way, and so I decided to put Jalen in the game.”

Wentz, however, didn’t know he was handing off the baton for the rest of the game — and maybe the 2020 season.

"I was just told he was going in for the next play and the next series, so I didn’t really know what was going on there," Wentz said of the benching which came after a 6-for-15 effort for 79 yards. "Obviously, it’s frustrating as a competitor. Just the personality I have, I want to be the guy out there, but it is what it is.

"They made the call today. At the end of the day, we lost. As a team we lost, and I think that, for me, that’s what I’m most frustrated about."

Hurts wasn’t exactly Aaron Rodgers either, but he gave the entire team a spark to the point that Jalen Reagor took a punt return to the house and the defense even stopped the locomotive that was Rodgers-to-Davante Adams for a few series.

Down three scores with Wentz in the lineup, the Eagles already had the toe tag placed on them.

With Hurts using his arm and legs, the Eagles had the football with a chance to tie the game late in the fourth quarter and it took a brilliant Aaron Jones 77-yard run to finally seal the deal for the Pack.

On his third play, Hurts hit fellow rookie Reagor for 34 yards to the Packers' 35. One play later, a long run by Boston Scott run was called back for a holding penalty, and the Eagles were forced to punt.

Splash play and all, the biggest news there was that it was the first time that Hurts got consecutive plays with Wentz on the sideline. The 2019 Heisman runner-up entered Sunday’s game playing 33 snaps 10 games. The final numbers for Hurts were 5-of-12 passes for 109 yards with a touchdown and an interception. He also ran five times for 29 yards.

The spark included a 32-yard touchdown pass to Greg Ward, the first TD pass of Hurts' career, on a 4th-and-18 play. That was quickly followed by Reagor's 73-yard punt return for a touchdown, drawing the Eagles to within a touchdown, 23-16, with six and a half minutes left.

“He did some good things. He used his legs when he had to, made a really nice throw to Greg Ward ... that was the spark that really got us back into this football game,” Pederson said.

Hurts even got a chance to lead the Eagles on a potential game-tying drive but failed before Jones’ heroics.

"With all my heart, I had every intention of coming in and getting that done and winning the game, but we came up short," Hurts said. "That only lights a fire in everybody moving forward. However it looks, the objective in this game is to win. You gotta keep pushing and believing."

What happens now is anyone’s guess.

"That’s not for me (to decide)," Wentz said. "I know what I’m capable of. I know I can play better. I never have doubted myself or lost my confidence in my abilities. A lot of these things are outside of my control."

They are presumably not outside Pederson’s control.

The problem here isn’t the decision. It’s the fact that Wentz is making it such an easy one.